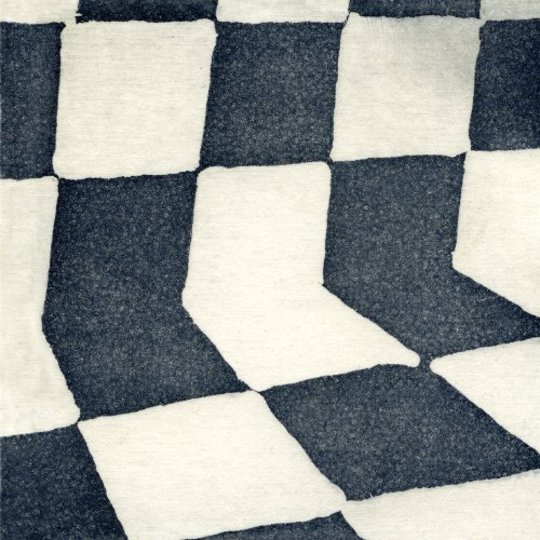 Music reviewing rule no. 4: Avoid writing in the first person.

Music reviewing rule no. 7: State an opinion about the album. Be firm. Say whether it’s good, bad, or somewhere in between.

Music reviewing rule no. 312: Thou shalt not shoehorn references to key works of existentialism into your text in attempt to make yourself look clever. It doesn’t work. You’re not clever.

So forgive me for sounding like Camus’s Meursault, bemusedly securing his own demise by breaking the rules without ever really knowing why, and let me say this: I don’t know.

I do not know what to make of this album. I can’t decide whether it’s great, terrible, or mediocre. Perhaps it is all three at the same time.

For those who have enjoyed Ducktails’ previous output (largely instrumental, hazy bedroom guitar jams), The Flower Lane will come as a surprise. While Matt Mondanile's last record, Arcade Dynamics, shifted slightly from his earlier improvs to a more vaguely song-based lo-fi hypnagogic sound, here he pulls on a pair of tight Speedos, takes a glance at his digital watch which is also a calculator, and jumps headfirst into the deep end of smooth Eighties pop-rock.

Less of an evolution, this departure (or is it a betrayal?) from Ducktails' prior sound is more jarring than when Phil Collins conquered Genesis, when U2 went ‘Discothèque’, when the Manics swapped their balaclavas for ironed shirts and harpists, or when Rod Stewart released ‘Do Ya Think I’m Sexy?’ Yet those were (desperate?) attempts to keep up with the tide of fashion. This is more backwards-gazing, like Yeah Yeah Yeahs’ It’s Blitz, only more enamoured by Prefab Sprout and Fleetwood Mac than with the ever-so-slightly edgier Blondie. Still, Mondanile deserves some kudos for avoiding the rather obvious and worn-out electro-retro route and prancing carelessly down the far riskier path of pastel-coloured-designer-suit-sleeves-rolled-up-to-the-elbows soft rock... doesn’t he?

It’s hard to tell if this ridiculous MOR pop sound is at all sincere or whether it’s performed with one knowing eyebrow raised. It feels less OTT and jokey than, say, Tim Chad & Sherry or Chromeo, but nor does it demand to be taken completely seriously like La Roux or that inadvertently hilarious third Keane album. Has Mondanile himself even decided? Or is he like that Gen-X Lollapalooza fan in The Simpsons who doesn’t even know anymore? ...Or is that me?

It’s not even clear if this is still a solo side-project or now a proper band. Ducktails used to be Mondanile on his own, in his room, with a knackered old cassette player and some wonky pedals. The Flower Lane is all covered in sheen and he’s roped in members of Big Troubles (and others) to play on this and at subsequent live dates. Should this project have been released under the Ducktails tag or should it have been branded a new name given that it has such a radically different sound and line-up? Why does Mondanile feel the need to produce an album of summery pop music when that’s essentially what his other band (Real Estate) trade in (albeit with less of an Eighties tinge)? It’s not like when Graham Coxon left Blur and for whatever financial or conceited reasons suddenly ditched the heroically unlistenable homemade racket of his earlier solo efforts in favour of trying to write catchy ballads produced by Stephen Street (unless Mondanile knows something we don’t, of course).

Somehow, the middle-of-the-road aesthetic and overpowering glossiness doesn’t equal awfulness, however. The melodies are breezily infectious, even if the lyrics remain largely banal, and the advances in production have not impaired Mondanile’s ability to create an atmosphere of laid-back, care-free abandon. There are occasional hints of the old sound, buried somewhere in the polish of ‘Ivy Covered House’ and ‘Assistant Director’, and in the gleeful, sozzled guitar solos which are occasionally, briefly unleashed. One track, ‘International Date Line’, if murkier, could have slotted into an earlier album. ‘Under Cover’, on the other hand, comes armed with a Kenny G-style sax solo. It works though, in tandem with the rest of the song’s sexual seduction vibe. Initially repelled, by the second minute you’re lying on a sunlounger sipping a cocktail with an umbrella in it while Mondanile massages your shoulders.

The blandest moment is ‘Letter of Intent’, a duet between Future Shuttle’s Jessa Farkas and Big Troubles’ Ian Drennan. It’s like Sarah from Dubstar being coaxed out of a coma by someone who thinks the greatest moment in rock is the “huh huh huh hu-uh” bit in Spandau Ballet’s ‘True’. With both voices adopting such a robotic apathy, could this supposed love song be a veiled comment on the legacy of the morally vacuous, unashamedly self-centred attitudes that seemed to emerge in the 1980s, were promoted by certain governments and media outlets, and which rewired our brains, forever distancing each of us from our fellow human beings, emotionally if not technologically, and leaving us unable to truly love ourselves or another? Possibly.

This track’s trashiness does serve to make the subsequent, final track (‘Academy Avenue’) sound even lovelier than it already would; an acoustic, Marr-ish jangle backs voyeuristic lyrical observations of students talking and couples strolling hand-in-hand. Though conveying feelings of excluded longing, the protagonist appears more happy for his subjects than embittered by them; it’s the antidote to the previous track’s coldness.

Anyway, you don’t need me to tell you whether The Flower Lane is good or not, you can find it and listen to it in an instant with one flick of your preferred gadget. Maybe if you do, it’ll leave you as confused, bewildered, intrigued, surprised, sceptical, pleased, not pleased, and confidently insecure as it did me. In an age when everybody can (and does) let everybody else know their viewpoints on all things at all times with the press of a button, with attitudes and judgements continuously fired at our senses from every angle in this overwhelming culture of ‘Total Noise’, I’d rather shrug my shoulders and go “err...?” than feign any stronger belief either way. Ducktails helped me realise this and Ducktails made it all okay.

Coda: What is the future of music journalism? What function do music reviews serve in this day and age?