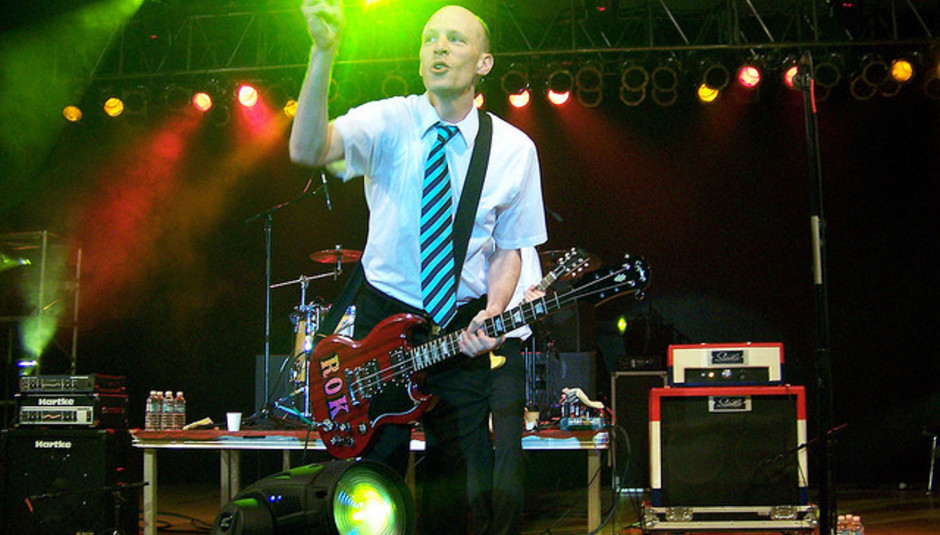 This week's Spotifriday playlist features the likes of Wilco, Presidents of the United States of America, Johnny Foreigner, Ben Frost, Africa Hitech and then a few more. Click here to listen to it.

Wilco recently played a couple of shows in London, both at the Roundhouse. I hear they went down well. If you weren't there but wondered what it looked like, or were there and fancied getting a closer look then you should have a look at this photo set from from one of the nights.

Thomas Dolby is perhaps one of those guys who should be a lot more celebrated than they actually are. Either way, if you want a great deal of insight into the man himself and his new record, A Map Of The Floating City, then it'd be a good idea to start with Joseph Stannard's review of it. Just saying.

This may well be the worst song title of all time, although I admit it does raise a least a little chuckle for its complete silliness. Still, it's taken from their newest and third full-length record, which was released on Monday this week. It's pretty good, but don't take my word for it, take someone else's.

There is not a great deal of Ben Frost's music on Spotify, which may be a good or bad thing. In fact this is the only 'proper' track. It's taken from a great little compilation called On Isolation which, I believe, is actually out of print. So check it out on Spotify. Anyway, Frost is included as his album with Daniel Bjarnason, Sólaris, was released earlier this week. Read a (my) review of it here.

Nine times out of ten I end up mistyping "Slayer", either writing it as my own surname or a mixture of that and the band's name. It's quite frustrating, and has been even more so this week as the band have been announced to headline a night at ATP's I'll Be Your Mirror festival, 2012 edition. Also on the bill: Guided By Voices and Codeine.

6. The Presidents of the United States of America - 'Lump'

So, the Presidents of the United States of America are to give their self-titled debut album the "Don't Look Back" treatment, although not in association with ATP, you understand. They'll be performing it in full in the UK next year, on a selection of dates. Click here to find out when and where they are.

This, my friends, is a particularly long track, in comparison to the couple before it. It's certainly no worse off for it, though. It does all the things you'd expect a Prins Thomas remix to do, thankfully enough. Lindstrøm will release a new album in February next year. Click here for more information.

Does anybody get the feeling that Laura Marling's career trajectory appears to be heading downwards rather than upwards? Or is that just me? Still, it's not like her latest record was actually bad, just perhaps not as good as the previous one, which in turn...anyway. There are some photos of her recent cathedral tour here.

David Lynch bloody loves football, doesn't he? Or does he? Perhaps you can find out in our review of his album Crazy Clown Time.

OK, so this isn't the Single of the Week, but the title is remarkably similar. I'm not entirely sure what the differences are but I think they are two versions of the same song. Either way, 'Do You Really Wanna Fight' was Wendy Roby's top favourite of the week, writing that she reckons "wise and larksome enough to convince a mob" to not fight. Could happen.

Click here to listen to this week's playlist and here to browse through our extensive archive of them.