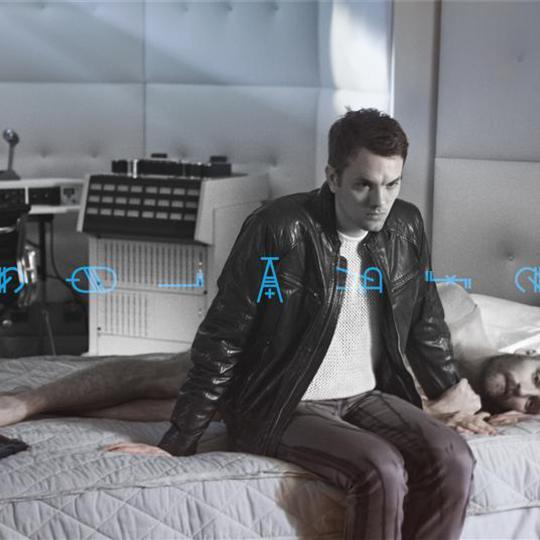 Sólaris, a project and record by Icelandic composer Daníel Bjarnason and Icelandic-based Australian Ben Frost, is many things. Firstly and foremostly it is a score to Stanislaw Lem's novel of the same name (note: Solaris, not Sólaris) and also a re-imagination of the accompaniment to Russian Andrei Tarkovsky's 1972 film adaptation. It was commissioned by last year's Unsound Festival and its basis is Poland's Sinfonietta Cracovia and a prepared piano.

The plot follows a scientist, Kris Kelvin, who travels from Earth to a distant planet, Solaris, where a few straggling humans are at the end of a failing, decades-long research program. They have been fruitlessly investigating the possibility of life on the planet, based primarily around its vast, ever-changing, morphing and mysterious ocean, thought to be an advanced, intelligent life-form itself. Upon Kelvin's arrival he's greeted with the news of the suicide of one inhabitant and the ongoing demise of the remainder's mental conditions.

Frost has said that the Tarkovsky score compounds the technological and science fiction elements of the story, rather than the 'human, internal' aspects; things which loom largely and profoundly in the development of Solaris. Despite this, Frost has been and remains a master of creating a sub-zero ambience. The sci-fi elements are not untouched here, with peripheral winds which whistle and howl and frequent string-based glissandos which tilt, helping the mind's eye and ear along.

Like many great stories, that of Solaris is not so much about one thing but several which make up the human condition. The opening track's title is telling. 'We Don't Need Other Worlds, We Need Mirrors' deals with the manifestations created by the ocean which appear to the three crew members and their desire to understand things far beyond their ken, before they know themselves. These are seemingly apparitions of people, creations taken from the recesses of each crew member's subconscious, acting as crystal-clear reflections of a deep guilt – in Kelvin's case a former lover who committed suicide, for which he partly blames himself. It unnervingly introduces us to Frost and Bjarnason's vision of Sólaris.

There are certain passages, like 'Simulacra II', which ebb and flow in the most dramatic fashion, the high points created by a crescendo, formed from minimalistic and resonant beginnings. It eventually becomes so steep that it causes and warrants a sharp intake of breath. The ride in this section seems endless, as strings and a drone emerge before levelling out, then rising and falling once more, over and over. The sounds and scenes which Frost and Bjarnason make - much like the thick, gooey fog which plagues Solaris – are all engulfing. Thick and overbearing, they hang heavily.

Lem's themes of isolation and separation are also abundant throughout, and these make it an occasionally tough listen. The discordant piano-led passages capture the confusion which Kelvin experiences within the station. There are a few moments of respite from this, and about the most enjoyable are those where tension gives way to relief and release. Both sudden and gradual changes in dynamics are used to illustrate this; a strained diminuendo in 'Unbreakable Silence' and the almighty drop-to-nothing which occurs in the transition between 'Cruel Miracles' and 'Hydrogen Sulfide'. The mid-point climax of 'Unbreakable Silence', too, with its oscillating, closely-played strings builds an agitated, twitching tension.

As things become more uncertain aboard the station, a conclusion to the story is never truly reached and nor is there a musical one. As one last final slow swell of strings peters out after a peak, a strong unease remains. In truth, it never really disappears. The overall experience is one with a complexity and depth that leaves you wanting to return, but also one in which you search for finality each time you do. Just as Sartorius, Snow and Kelvin are marooned – emotionally and actually – Lem traps you within the pages and Frost and Bjarnason's orchestral companion fixes you firmly to the spot. Sólaris seems to be laden with sorrow, but you are not drowned in sorrow alone. It inhabits a place from which not only is it impossible to escape, you also feel compelled not to. It grabs you not by the throat, but almost by your very essence.

Lem's novel and Tarkovsky's film are both undoubtedly outstanding works, though different in their focus and perspective. Now Frost and Bjarnason's collaboration can be thought of as such, filling a gap with a suitably powerful addition. The artistic context is not a prerequisite, as the forever gripping and occasionally terrifying sounds are universal. It is also not an outwardly sci-fi album and, for its ambition and execution, Sólaris should sit very highly in the curriculum vitaes of both its creators.