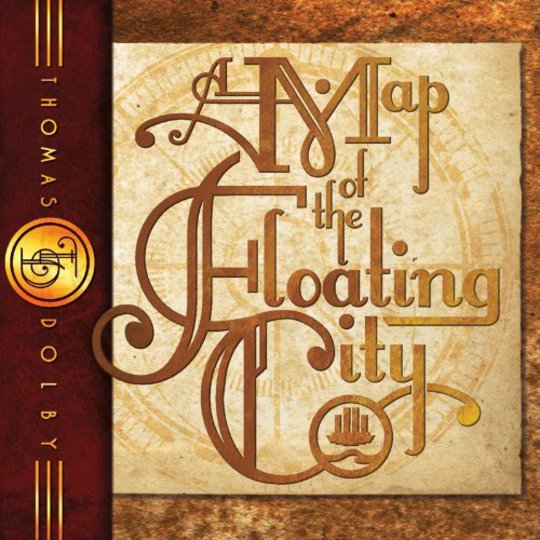 For a brief moment there, I entertained the ludicrous notion that inveterate pop maverick Thomas Dolby had done the dishonourable thing and made a ‘normal’ album. The opening track of his first full-length release in almost 20 years, an ode to writer’s block entitled ‘Nothing New Under The Sun’, prepares the listener for an exercise in mature popcraft along the lines of Dolby’s erstwhile collaborators Prefab Sprout, whose albums he produced from 1985 to 1990. Much as I like this song - and that band - I was relieved to have this impression blown to smithereens by the remaining ten tracks, starting with the undulating bass, lubricious brass and Bollywood orchestrations of ‘Spice Train’. This song finds Dolby dragging the tarpaulin off the airship first sighted in 1988’s ‘Budapest By Blimp’ and revelling in the role of globe-trotting huckster: “One big bazaar/The world is like a garage sale.” How could I have doubted him?

There's a wider spectrum of musical flavours than ever. But the voice behind the songs is consistent... I get a kick out of working in new styles where I don't really know what I'm doing.

Though he made his name as a synthesizer pioneer, early on there were firm denials that Floating City would be an electronic album - a disappointment for those who hoped for a period piece in the vein of John Foxx’s The Shape Of Things - yet ’Spice Train’ and ‘Evil Twin Brother’ (featuring Regina Spektor as a seductive Russian waitress) both make effective use of electronics, the latter recalling the pop-trance productions of recent Gaga and Rihanna without sounding like the work of a baffled veteran second-guessing the tastes of a youthful audience he’s unlikely to reach. As always, Dolby is clearly more interested in building upon his history than simply rehashing it, weaving past, present and future into something difficult to peg but entirely his own.

When I started out it was very rare to find good synth setups, because they were expensive, cumbersome, and didn't stay in tune. Now you can download a range of apps for free or very cheap that are more powerful than anything I ever had. And learning them is free, because you can sit in your bedroom or in your local coffee bar instead of a pricey studio. So guys are putting in insane hours tweaking softsynth sequences, like they're playing World Of Warcraft or something... the results far outshine anything I'd have the patience to do! Still, what I have have over them is my songwriting craft. So it's all about the songs now. I'll use whatever musical idiom is appropriate. It might be bossa nova on 'Simone', or a bluegrass/techno mashup on 'The Toad Lickers'. There's a lot more electronics on 'Spice Train' and 'Evil Twin Brother' because thats what the stories demand.

I often tell people, whether asked or not, that Thomas Dolby’s 1982 debut The Golden Age Of Wireless is The Greatest Synthpop Album Ever Made. It would perhaps be more accurate to state that Wireless is The Greatest Album Ever Described As Synthpop. Although several of its tracks are shaped or enhanced by Dolby’s use and abuse of then ‘cutting edge’ music technology, plenty of them involve ‘live’ instrumentation and ensemble playing. Despite his reputation as a ‘mad scientist’ and ‘synth wizard’, Dolby has always been a songwriter first and foremost. This much can be gleaned from such mini-masterpieces as ‘Flying North’, ‘Radio Silence’, ‘Weightless’ and ‘Screen Kiss’ and it’s just as evident on this new material. A case in point is ‘Jealous Thing Called Love’, a tale of broken trust revolving around an organic bossa rhythm and Rich Armstrong’s keening trumpet, not to mention a lyric of heartbreaking economy and grace: “I will be there/If you call me/Just don’t call me/If you’re with her.” Dolby’s strength as a vocalist comes to the fore here, his measured delivery hitting precisely the right pitch of fractured hope and regret. He acquits himself equally well on the seven-minute ‘17 Hills’, a country folk ballad augmented by New York string quartet Ethel, Natalie McMaster’s fiddle, Bruce Kaphan’s mournful pedal steel and the lead guitar of the much-maligned Mark Knopfler - whose playing here is as apropos as it is on Scott Walker’s Climate Of Hunter. Dolby’s vocal is plaintive and unpretentious (no faux-American accent, thank goodness), his commitment to the art of storytelling unswerving. Departure though it may be, its narrative style and content aren’t unrelated to the likes of ‘Urban Tribal’ and ‘Screen Kiss’ - tales of tainted love set against a panoramic backdrop and conveyed with a cinematographer’s skill.

I'm proud that ‘17 Hills’ is a bit of an epic, that it all holds together through twists and turns. It has a filmic quality. One minute you're seeing a convertible racing across a desert road in a cloud of dust. Then you cut to the interior and the car radio, and you hear what's on it. It progresses like that and ends with an aerial shot as the hero floats off into the Pacific on a pile of driftwood, with the city in the background.

As with all of Dolby’s best work, Floating City is informed by an acute sense of location and dislocation. The title offers a less-than-subtle clue, affirmed by the fact that the album is divided into three distinct districts. ‘Urbanoia’ is a response to the grit and duplicity of the city, an environment Dolby admits to finding unsettling; ‘Amerikana’ pays tribute to the two-decades-plus he spent as a US resident; ‘Oceanea’ details his return to the east coast of England. All of the songs excepting ‘Nothing New Under The Sun’ are explicitly tied to one location, or several, and the Dolby eye for detail is every bit as keen as it was when he was observing men in suits in Pan Am bars back in 1982. The background minutiae here - fire escapes and barstools in the noirish ‘Evil Twin Brother’, motels and phone booths in ‘Jealous Thing Called Love’, brassieres and Searses in ‘Road To Reno’ - are vital to the establishment of an alternate universe which proves both seductive and immersive. Dolby has been rightly hailed as a progenitor of steampunk, and his tinkering with parallel timelines and near-futures also brings to mind Donald Fagen’s Pynchonesque 1993 concept album Kamakiriad. Further parallels emerge when you consider the fact that Fagen’s previous solo effort The Nightfly was released the same year as Wireless and shares many of its thematic preoccupations. But I digress...

ocation is the biggest influence on my writing. Not only where I am, but also the displacement that got me there.

Given that the various narrative strands of Dolby’s career have recently formed the basis of an online game which shares a title with the album, the songs that comprise Floating City could be viewed as an expansion pack for the virtual world Dolby has been building, consciously or otherwise, since his 1981 debut single ‘Urges’/’Leipzig’. It isn’t unusual for characters to recur in Dolby’s songwriting - the most obvious example being the childhood sweethearts of ‘Europa And The Pirate Twins’ (1982) who returned a decade later in ‘Eastern Bloc’ on 1992’s Astronauts And Heretics. ‘To The Lifeboats’ features the reintroduction of Caroline, the central character of 1982’s cryptic ‘Radio Silence’. If Caroline embodied the Spirit Of Radio on the former song, sharing her name with the legendary Sixties pirate station, here she’s a Radiophonic ghost, a very English manifestation of the Angel of Death, awaiting expiation. ‘To The Lifeboats’ closes the album on an unusually apocalyptic note; foreseeing, if not the end of the world, then at least the end of Albion: “There’s a freak storm blowing in/In from the Poles/I’ll be the last to leave the bridge/Last rat off the ship/England!” That final word is sung first in an anguished howl, then in an elegiac sob.

You can't avoid feeling a sense of doom on my coastline! It's dotted with concrete structures built to prepare for an invasion that never came. Thousands of years ago you could have walked to Holland from here. The ruins of many settlements and villages are out there under the waves, and ours will one day go the same way. Hopefully not in my lifetime. But global warming is accelerating the encroachment, and the government is doing little to keep up the sea defences.

For all its stylistic diversity - bluegrass, bossa, jazz and electro all get a look in - and voracious internationalism, Floating City is a work with an identifiable centre. Home is where the heart is, Dolby’s being East Anglia, the same region of the British Isles that inspired Brian Eno’s bleakly nostalgic Ambient 4: On Land. It’s when he returns to base for the album’s concluding trilogy of songs that Dolby delivers his finest material. ‘Oceanea’, the title track of the album’s third and final segment, takes the accolade of the single most beautiful song I’ve heard this year. It was duking it out for a while with Alexander Tucker’s similarly site-specific ‘Host’ but emerged victorious, perhaps due to my own experiences of travelling between Brighton (my home) and London (my frequent workplace) during the latter part of the year. I’ve felt the same sense of comfort and relief drawing into Brighton station of an evening as Dolby describes here, his “stumble home to Oceanea” mirroring my own weary trudge back to the English coastline. For Dolby, Oceanea stands for belonging and, furthermore, longing for the amniotic refuge of the womb. On the final verse, guest vocalist Eddi Reader voices the character of Dolby’s late mother. The effect is sublime, breathtaking.

I feel a very strong sense of belonging in East Anglia. I spent much of my childhood here, and my own kids have been coming here since they can remember. I learned to sail on these rivers. My mum's family have been here for generations and there are buildings around that they built. She was not around to meet my kids or see them enjoying East Anglia. But the moment Eddi Reader began to sing on the track, I felt my mum's spirit, approving.

With the album’s concluding sequence, Dolby brings his career full circle. Having travelled the length and breadth of the Flat Earth, forged innumerable connections and founded a business empire (he’s famously responsible for Nokia’s signature ringtone) he finds his sense of self restored in the boat-cum-studio named The Nutmeg Of Consolation, anchored in Suffolk. With ‘Simone’, Dolby acknowledges the transformative potential of travel, relating the inner turmoil of an individual desperate to escape their former identity - and their gender - to become reborn in an alien landscape. Ultimately, though, he knows that flight must end somewhere... and where better than the beginning? So we leave him perched on the edge of England, watching as the tide continues its implacable erosion. Draw whatever conclusions you will from this; as Dolby warns us, “There are no fucking lifeboats.”