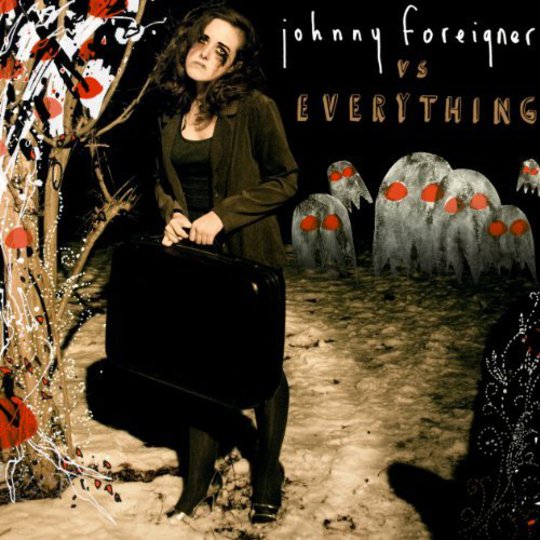 In the past two weeks since I first received my promotional copy of Johnny Foreigner vs. Everything, I’ve found it already weaving inextricably with the events of my day-to-day life. That sunshot walk to work. That half-remembered night out, the friends I spent it with, and the aftermath. That person I miss. Johnny Foreigner have always had a gift for inclusion; they write songs about their friends, their enemies, the beauties and horrors of everyday life, and somehow they make you feel like you’re all part of it. Kelly, Junior and Alexei are the people you grew up with, going to the same shows, hanging in the same places and bumping into each other at parties. That band they formed may have made it big(ish) and sent them across the world, but you still see them at that old clubnight every now and again, and you catch up about adventures you had, the people you knew and have a blast. Johnny Foreigner vs. Everything is the latest of these catch ups.

We all know the old cliché; a band spends their lives crafting that one fantastic debut record, and then subsequently tours it to death for the next eighteen months, doing nothing else but playing shows and grappling with boredom on the tourbus. When it comes to album two, the band have nothing in common with their fans, the only thing they know being damp green rooms and stages where barriers and ledges elevate them away from the people they once were. It’s an unwritten rule that the ‘tour record’ is creative suicide. This album disregards this rule, and honestly is no worse for it. Sure, there’s a lot of talk about places I’ve never been (Salzburg, Texas, Tokyo, Cape Town) and a few I have (New Street Station, the ‘hostel north of nowhere’) but these road songs are not loaded with the hubris of stadium rockers firing themselves around the globe on their sterile private jets, sunglasses on. It’s filled with the sorrow of loss for the people and places they pass so briefly on their roadtrip across the earth. Take first single ‘(Don’t) Show Us Your Fangs’. It may be one of the best songs the band has ever released. It’s certainly one of the best I’ve heard this year. Acoustic guitars whir and a glockenspiel chimes as they sing of the loneliness and detachment that comes from being in a new town where you know nothing and no one and there isn’t even time to learn. These experiences may be uncommon, but the themes of isolation and nostalgia are universal, and Johnny Foreigner deliver them with great pathos.

This album comes as something of an achievement for the band, the first fruits of an endeavour to make full-length albums without the colossal budget or industry contacts of major-label endorsement. It barely shows. While the progress they’ve made between the release of debut Waited Up ‘Til it Was Light is apparent in the songwriting and arrangement of the songs here, the two both have in common a sharp, clean production style that seemed to have been neglected in the intermittent releases. While the scrappy, lo-fi recordings that made up Grace and The Bigger Picture and the various EPs suited the band, it often didn’t do justice to the dramatic dynamics that they are so deft at cramming into every song. Now when the guitars come in, they REALLY come in. The variety of arrangement on the album is much wider than on previous releases too, the piano-led ‘Johnny Foreigner vs. You’, stylophone-accompanied ‘Doesn’t Believe in Angels’ and spoken word sound collages ‘Concret1’ and ‘Concret2’ all serve to form a thrilling record on which you never quite know where you will be taken next.

I’m aware that Johnny Foreigner need no introduction on this website; however, this relationship has not affected my review one bit: this really is a fantastic record, a heartfelt postcard from our old friends who formed a band. They may be older and they may be far away, but the just like the nostalgia for the times and places we’ve lost, the memories are getting sweeter all the time.