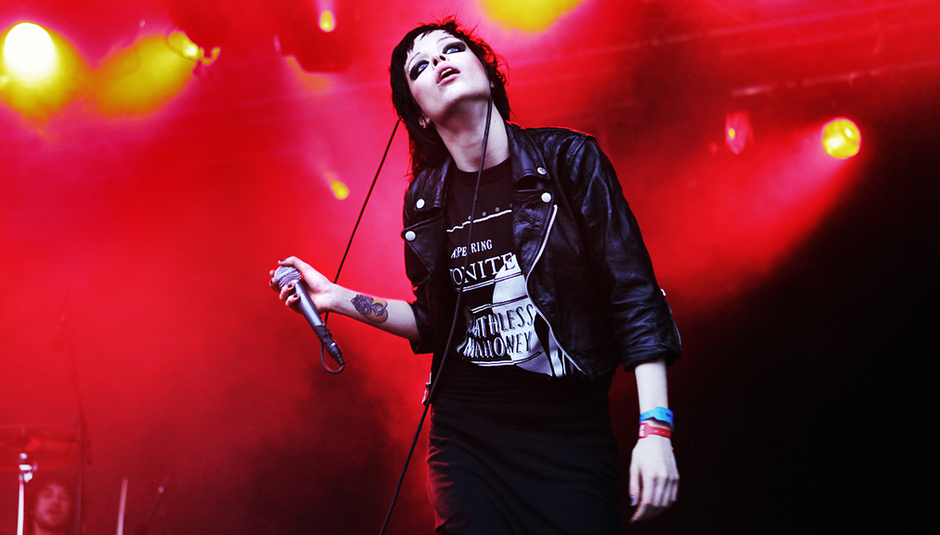 Sincerest and most super apologies for a recent deficiency in Spotify playlists. We get all the way to 42 without missing a single one and then BAM! there's only one in three weeks. That's just how these things go sometimes. But we hope we make up for it with this week's varied offering, featuring Crystal Castles, Grails, Tweak Bird, Zola Jesus, Atlas Sound, Toro Y Moi and plenty more for you to get your lugholes round.

Click here to give it a spin via Spotify which, I believe, is once again invite-free in the UK. Hoorah.

Yes, it may have been out (leaked and digitally released) for a few weeks now, but we finally got round to reviewing it, scoring it 6 marks out of 10. Andrzej Lukowski reviewed the second Crystal Castles self-titled record (should probably just refer to it as II, seems to make sense) here.

Leader of a genre that doesn't really exist. That must feel like quite some responsibility forced on Chaz Bundick's shoulders. Nevertheless, his latest cut, 'Leave Everywhere' is actually at least a couple of sidesteps away from whatever it was he was doing before, possibly for the better, possibly not. We await further results.

It wouldn't be a Spotify playlist without mentioning something about the weather. It's been alright so far this week, perhaps a bit breezy for my liking but reports indicate that this weekend could be the hottest of the year so far which, despite a pallid complexion and leanings toward agoraphobia, is good news. You could also do worse than stick this track on a Summer Mixtape. Two new tracks from Fair Ohs here.

You should have noticed that last week there was an ATP event, this time curated by Pavement. You may have even gone. We didn't really want to put Pavement in as they've had their fair share of action in these playlists, so instead we chose Atlas Sound. A wise choice. Click here to read our review of the event.

Connan Mockasin was in my dream last night. He wanted me to play trumpet for him. I did try but it wasn't working, so I stormed off, violently. Nobody was watching anyway. He released his new record this week and here the pint-size Kiwi collaborates with Norman Cook/Fatboy Slim/The Brighton Port Authority for 'Jumps The Fince'.

LCD Soundsystem's 'Drunk Girls' was actually the Single Of The Week but, again, we don't need to sing their praises any louder than we already do. On the other hand, Denmark's Oh No Ono perhaps need a bit more affirmative action. Their music is pretty creepy, to be honest, but at the same time uplifting. Wendy Roby hits the truth with this statement about their current record "I was listening to Eggs this week, and I was struck by how shrill it was, but not shrill in a Passion Pit, oh do shut up, sort of way. And of course, it is psychedelic and quite demented, but essentially very joyful."

ISIS (never sure about Isis or ISIS) this week announced they were going to call time on their musical career. Some people were unhappy about this, others didn't seem too bothered. Anyway, 'Wavering Radiant' is the title track from what will now be their final album and is brooding to the max. It's about the shortest track we could find from them, too.

As we say every BLOODY week it runs, it's a pleasure trawling through Chris Power's armchair dancefloor column, especially when it comes to choosing what goes on this playlist. If anyone reads this after I've departed this world, I would like this one to soundtrack the arrival of the hearse to the crematorium.

There's the feeling that Hauschka, a.k.a. Volker Bertelmann (which sounds like a German pharmaceuticals conglomerate), is one of those people. Supremely talented yet will do absolutely everything to challenge themselves in the most artistic way possible. Whilst, if you were one of his peers, you might find this annoying, we should probably revel in this fact because he produces stuff like 'The Prepared Piano' and indeed 'Fernpunkt'. Read our live review of his show here.

Let's get stoned and listen to Grails. Yeah, OK then. They played ATPavement. Read the review here.

Wendy Roby sayeth: "Two minutes of absurdly heavy riffs are followed by a spooky jazz section. And it is a very good - if rather chilly - listen, even if this description makes it sound rather GET OUT OF TOWN. And by 'town', I do of course mean 'jazz'."

Zola Jesus is a sublime performing name. Mainly because it encapsulates the feeling of most Chelsea fans from the period 1996-2003, where Gianfranco made plenty of appearances and scored plenty of goals. The video for this particular song is available to view here.

13. The Delta Mirror - 'He Was Worse Than The Needle He Gave You'

The first (and last) of this week's playlist selected from the community part of our website. This is from the Recommended Albums of 2010 (thus far) thread, where The Delta Mirror's Machines That Listen makes an appearance. It's described as both "glitchy, pretty, foggy vocaled landscapes" and "a warm bundle of niceness". Agreed.

Always a pleasure and rarely a chore to hear new Aphex Twin material right? Well, good, because there's a decent quality recording of some of it, performed in beautiful France. 'Custodian Discount' is old, but still worthy.

A answer or sequel to Brian Eno's Music For Airports? Go on then! That's what The Black Dog have done with their Music For Real Airports, as featured in Chris Power's armchair dancefloor column. Chris says that: "Moving through darkside ambience, old-school low-tempo techno and brief moments of beatlesss uplift, this is, as you might hope, a lot more enjoyable than Stansted at 7am on a Friday morning." Yes.

Click here to listen to this week's playlist via Spotify and do likewise here to browse our current selection of playlists.