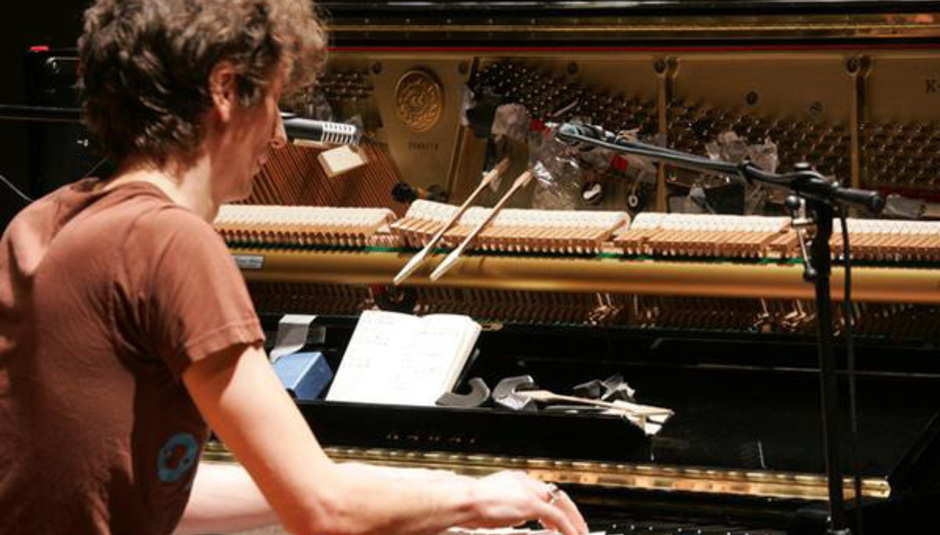 Collaborative performances can be a risky thing. Bringing together musicians of different backgrounds and genres can inadvertently expose the deficiencies of one, whilst highlighting the skills of another. Kept Impulses is the abstract title of a joint tour for 12-string guitarist James Blackshaw, singer-songwriter Nancy Elizabeth and experimental pianist Hauschka, and is named for their shared ability to “harness wild impulses into measured and musical journeys”. Each take turns in performing their own material, and contribute to the others’ work throughout the first half. The Barbican show was also accompanied by a specially selected chamber ensemble, directed by eminent multi-instrumentalist and arranger David Coulter.

Seated at one of the two grand pianos onstage, Wigan-born Elizabeth tells us that she’s wearing her “poshest dress”, adding, “I was a bit freaked out about playing here; I think we all feel the same.” Blackshaw certainly looks slightly awkward and quietly admits to feeling underdressed, though Hauschka seems fairly at ease at the other piano, peering out into the cavernous auditorium. The key players of the ensemble - harpist Julia Thornton, Thomas Bloch on cristal bachet and ondes martenot, and Coulter playing violin and various percussion are sat behind a gauze curtain, over which a pattern reminiscent of the Aurora Borealis slowly fades in and out.

Rapidly arpeggiated chords emanate from Blackshaw’s guitar, expanding into a burst of complex harmonic patterns. His instrumental compositions have been described as ‘celestial’ and ‘transcendental’; I feel myself being lulled into a warm sort of trance, which results in one song blurring into the next. The waves of cyclical picking are aurally beautiful, but it left me curiously unmoved. Later efforts, underpinned by the enlarged ensemble of lilting strings and woodwinds, seem infused with more personality and are therefore more engaging – although that may be due to Coulter’s well-tempered and unobtrusive arrangements.

Billed as a multi-instrumentalist and singer, Nancy Elizabeth’s voice is sweet and unaffected, with occasional shades of Vashti Bunyan. Even when supported by the full ensemble, her songs have an interestingly sparse, solitary feel about them. Inevitable comparisons have been made to Joanna Newsom; they both play the harp (the smaller Celtic harp in Elizabeth’s case) and both have a faux-naïf quality about them. However, Elizabeth’s lyrics lack Newsom’s textual dexterity, and her inability to articulate the words made it difficult to understand them in the first place. Nonetheless, there were some lovely moments - ‘I’m Like The Paper’, played on the Celtic harp and doubled by the orchestral harp was particularly effective; added choral lines and mournful clarinet led songs such as ‘Lay Low’ into darker territory than that originally inhabited.

Hauschka – whose work I was most familiar with – did not disappoint. Having already prepared his piano with pencils, bits of plastic and felt, strings of beads and other paraphernalia, he played pieces from Ferndorf and Snowflakes and Carwrecks before showcasing some new material. In a tradition that includes Erik Satie, John Cage and the Fluxus movement, Hauschka’s playful inventions use a veritable junk shop’s worth of things that buzz, clatter and drone between the hammers and strings, or mute them for a more percussive tone. From these he constructs a repetitive figure, weaving melody and counter-melody each over the other, creating intricate soundscapes that evoke both the pastoral and the mechanical; a live bird encased in a ticking clock.

Retaining a sense of showmanship and humour, the most enchanting moment of the whole evening was a composition/improvisation in which Hauschka removes and discards all the bits and bobs, interspersed with long, sustained chords. A pause; he picks up a plastic carrier bag and empties a stream of ping-pong balls into the belly of the piano, causing the strings to resonate all together. From this discordant humming, lightly struck melodies descend into thunderous chords that churn the balls higher and faster like some sort of musical lottery draw. The sudden flurry of people trying to capture this on their camera phones (and the subsequent lock-down enforced by the ushers) was indicative of how mesmerising this simple act really was.

Whilst their music does have some common ground – a shared minimalist influence, a sense of building texture with sound – their collaboration was most authentic when playing a piece they composed together, rather than in grafting themselves on to songs already formed. '1000 Angels' was jointly written at the start of their week-long rehearsal period, its title inspired by a congregation of Hell’s Angels near their Hackney studio. A rhythmic piano line is enveloped by swooning violins, guitars are strummed with more and more vigour; Coulter’s musical saw soars high above the organised chaos below. As the ensemble gradually recedes into darkness, we are left with the voices of Hauschka and Nancy Elizabeth, wordlessly singing alongside Blackshaw’s bare guitar motif. The hushed awe of the audience is replaced with applause and a standing ovation; confirmation that no matter how awkward or unsure they were to begin with, these three musicians are capable of creating a sound worth cherishing.

In Photos: The Great Escape, Brighton