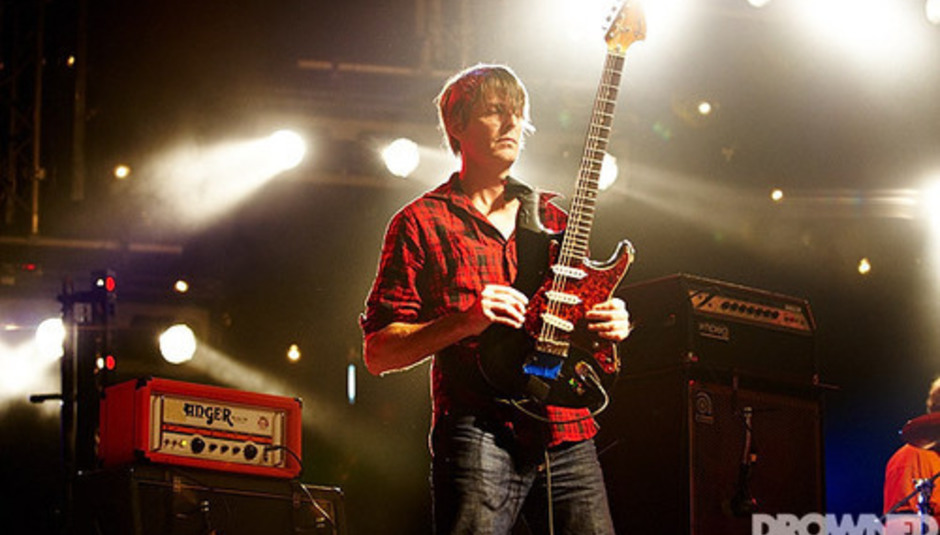 Ahoyhoy. Welcome to the review of the latest installment of ATP, hopefully a little trimmer, words, wise than the behemoths these things have been turning into of late. Brad Barrett and Andrzej Lukowski were the men on Butlins' newly-upholstered ground. Pictures by Gary Wolstenholme and Thomas Perry.

The great thing about arriving ridiculously early for ATP is the opportunity to survey the environment you'll be co opting from its usual holidaymaker occupants. Early signs of ATP's insidious influence come during a Pizza Hut buffet lunch where confused children hold their ears shut as Ian MacKaye barks out the refrain to 'Waiting Room'. As families look bewildered at the onslaught of youths with identikit outfits upon spindly frames, we have time to get accustomed to the dated carpets, the reek of bitter spillage and the delights of cosy chalets. We wouldn't have it any other way.

Initially the band CRAMMAGE on Friday both delights and dismays. Why is all that awesome shoved into a few hours on the first day when people are arriving? Then the whole thing inexorably rolls out before you and caring is pretty high on the not-to-do list.

Musically, it's an evening of one-upmanship. Calexico's Mexican and brass swathe is lovely listening but the laconic fury of The Walkmen is an immediate festival highlight. Hamilton's croon is bolstered by his blistering hollering which telegraphs shivers to the spine. The ripple of anticipatory joy as the hi-hat slashing of The Rat begins is brutally culled by a power cut. After a few minutes the set continues with a handful of new songs including the seductively potent 'Angela'. While Broken Social Scene have membership numbers sorted Mission of Burma have efficient economy down to a tee. Roger Miller's bullet shield between him and the drums is a visual reminder of the torrents of volume spilling from the stage. 'That's When I Reach For My Revolver' ends proceedings exceptionally, though minus points for lack of 'Academy Fight Song'. Finally, Quasi surely have melodic indie college rock almost as finely plotted as the festival curators, but Wooden Shjips dominate the Centre Stage with their locking grooves and layers – solid bass and waves of sonics. Neither band, though despite their hypnotic power, can prevent the night spinning out indefinitely from DJ Cherrystones and the infamous Crazy Horse to doomed, calamitous chalet parties. They probably wouldn't want to. And neither would we want them to. (BB) At several points during and after Wax Fang’s Saturday set – in which they cover the entirely of Prince’s seminal Purple Rain, in order - I do try and get my head around the layers of irony, subtext and circumstance that stop this being a bit tragic and instead make it BRILLIANT. It is a big laugh – we’re laughing at ourselves, doing something so absurd and off piste, we’re laughing at the band and the costumes and wigs rustled up at suspiciously short notice – but I guess ultimately it works because everybody here’s a music lover, Purple Rain is a near perfect pop album, played with freakish accuracy by Wax Fang. You could argue that it’s a very ATP moment, but maybe it’s better because it’s a music lover’s moment – surely on any given Saturday at Butlins this would be a pure delight. Though ‘Computer Blue’ was a bit shit.

Skip to the other end of the day and another conundrum: does Stephen Malkmus’s evident frostiness toward his Pavement bandmates undermine their set in any way? Nah: standing about as far to the left as possible, Malkmus seems happy to be here in his own way, save when the ‘antics’ on the right hand side – predominantly from Bob Nastanovich – start dragging on. Accepting ‘Carrot Rope’ isn’t going to happen, the set is generous, energetic and engaged. It’s sloppy enough - Malkmus's guitar tossing, Nastanovich getting his wife on for a dance - to feel we’re getting a flavour of the ‘old’ Pavement. But it's professional enough that they don’t fuck up what’s going to be most people here’s last ever chance to hear ‘Range Life’ et al played live. Hand on heart, I’m sure they were better in the Nineties, but this is still fucking magnificent.

Elsewhere and biggest disappointment of the day is not the Monotonix ‘incident’ – I cannot conceive of a way it could have been avoided – but missing the dude with the chainsaw in Faust’s set, turning up ten minutes from the end to the sound of people shouting 'we wants krautrock' while Faust play, y’know, krautrock. The Drones are impressive, not so much playing songs as one, big, sinewy-evil groove; Boris are awesome, a controlled, atmospheric, distortion-drenched set that sharply contrasts with the tomfoolery of their Mike Patton appearance. Waaaaaaaay later and Atlas Sound is more pleasurable live than my previous experience of the acoustic version of Cox’s solo project: as a late night treat it’s enjoyable and all over the shop – a cover of Pavement’s ‘We Dance’, complete with rambling introductory anecdote; a ten minute long new song about dying in hospital; a crowd singalong of ‘Happy Birthday’ to the 28-year-old Cox; a feverish one-two of 'Attic Lights'-'Sheila'. Finally, brain cannot quite compute Omar Souleyman by the time he comes on, but his trancey waves of Eastern pop are a delight, setting the dancefloor a jumpin' with confused young folk unsure as to whether they ought to be dancing or pogoing, and - in pleasingly cyclical fashion - bookending the day with another cheerily ludicrous Reds set. (AL) "I'm not a rock star any more... I'm a ROCK star". When Pavement’s Steve West informed us yesterday that he was going to offer a talk on stonemasonry on the Sunday, few actually expected him find themselves here, under a giant Bob the Builder sign, watching an indie rock drummer attacking a block of Hull-sourced sandstone with a chisel. He’s garrulous as fuck, and does manage to persuade us that actually stone masonry makes total sense as the next step for any self respecting slacker.

Portland old folk Pieced Arrows don’t get the warmest reception, but their odd mix of Patti Smith, AC/DC and, indeed, Dead Moon hits sporadic patches of magic. In non-Prince mode, Wax Fang are a strange proposition – in many ways they’re so slick and bombastic that they need to be in a tiny room like Reds to avoid sounding like an over-earnest stadium band. The Pavilion doesn’t quite suit them, then, though it becomes way more fun when we move forwards and the Theremin is bust out. You’d probably say the same for The Dodos - the furious clatter of the trio’s vibraphone-led assault adds a heady frenzy to even the blandest Let It Die material, but on a smaller stage it might have been actual, full on amazing. The Clean’s portentous Joy Division basslines and crystalline distortion is a thrill, initially, though again, they’re possibly not quite well know enough to command a room this size.

No such problem for The Fall, who hoik in an enormo-crowd, fire ‘em up with the teasing, fizzy, kraut intro of ‘O.F.Y.C. Showcase’, have us soaking ourselves in joy like David Essex fans of yore as Mark E Smith finally lurches on stage, and then... well, it’s not bad, but it is surprisingly one note, rendering Your Future Our Clutter into a homogenised, rarely changing whole that doesn’t really do justice to the recorded album. Still, it’s a thrill to hear Smith barking “two states!” in what may or may not be conciliatory fashion, while the two encores slay, taking in ‘Psychic Dance Hall’ and an immense closing ‘Theme From Sparta F.C.’.

Post-Fall, and what we catch of Enablers seems pretty awesome, in a sort of acid-lashed middle aged man staggering about the stage threatening everybody type way (actually that sounds quite a lot like The Fall – Enablers are more cinematic). Finally, Grails are perfect in the last slot of the night: there are various schools of thought on what band works best in the early hours on Monday, but at their best, Grails and their Eastern-tinged prog are like the climactic battle scene at the end of a lengthy war flick: huge, thunderous, and utterly cathartic. (AL)

All in all then, a good ATP: a lot of ticket holders freaked out a bit when the Matt Groening one started having its acts announced, but this one held its shape better than expected, while by and large the sheer sense of fun – and mostly excellent performances – made up for a little familiarity as far as newer acts were concerned. The Godspeed! line-up is looking pretty astounding at the moment, but will it be as fun as this one? Join us in December for The Answers, and see some of you in Primavera.