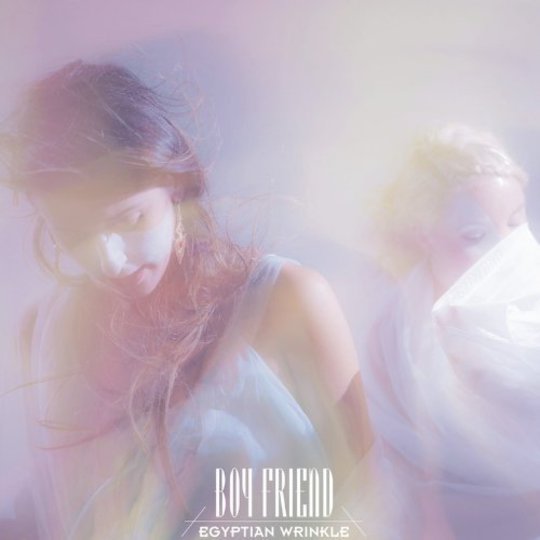 Sadly neither Egyptian nor wrinkly, there is, however, a belter of a conceit underpinning Egyptian Wrinkle, a break-up album like no other, courtesy of (ex-Sleep?Over) Texans, Christa Palazzolo and Sarah Brown.

Taking way too literally that maxim of the recently dumped:“Y'know, I just feel... like... DEAD INSIDE”, Boy Friend have based their debut around a notion of the fallout-period after breakup as a type of afterlife. Over ten tracks emerges a celestial realm, where the casualties of love rove dead-eyed and incomplete, neither of this world nor the next, saying stuff like “What's she got that I don't have?!” and “Pfft, THAT GUY, I'm funnier than that guy!”.... for all eternity. Mournful, emotionally faint, gaseous, lifeless and, as if tracking an aimlessly drifting soul, devoid of musical narrative, this is post-relationship ennui as living death. Which may hit a ghoulish nerve if ever, after a break up, you've been reassured that “Oh, you'll feel human again soon” You won't, is Boy Friend's conviction: this is home now.

That's the theory, anyway. And doesn't it sound pretty interesting? In practice, though, it kind of isn't.

If losing love makes ghosts of us, the ghost story needn't be so... ghostlike: semitransparent, immaterial, anaemic. Egyptian Wrinkle is a curious example of how 'exquisite intangibility' can work too well, curdling into what amounts to one big nothing. All the props are in place, but as a listening experience it's banal. The duo's colour-drained vistas of romantic shell-shock are insipid, while the monotony of those slow days spent alone in post-breakup limbo - expressed in percolating, unending, droning dirges - is all too real: tedious and grey. And if the tracks needed to be nebulous, as is the conventional notion of the misty heavens, they needn't have been quite so amorphous, i.e totally bereft of structure. Meanwhile their voices channel a kind of beatific numbness, that of a soul lost in time but oblivious to the new arrangements. Unfortunately, it's exactly numbness that the listener feels.

In less abstract terms, it's tough to think of a sound containing so little musical nuance; no surface irregularities, no shadows, no visible horizon. Just diffuse light everywhere. Total whiteout. Think of Egyptian Wrinkle as like a stay in hospital: white sheets and monochromatic décor, inane muzak streaming in loop from a seemingly everlasting TV show. Exhausted and bored the patients drift in and out of consciousness, through an afternoon of dragging hush and sporadically bleeping machines. Beneath the sparse percussion and perma-flow synths the pair manage to reference Twin Sister, Cocteau Twins and, most palpably... an ecclesiastical Salem. But the influences are neutralised by the complete absence of contrast, with the final product as flimsy and tasteless as a coke-fucked septum.

Although there's little to tell the tracks apart, their better moments arrive in 'The False Cross' and its shapely guitar melody, or 'The Lair' which plays like a nu-gaze The XX. Opener 'Rogue Waves 1' meanwhile, evokes peaceful death, before rebirth into fantastical realms. Nonetheless, if Boy Friend are able to conjure the coupledom's great hereafter, they're unable to make you care.