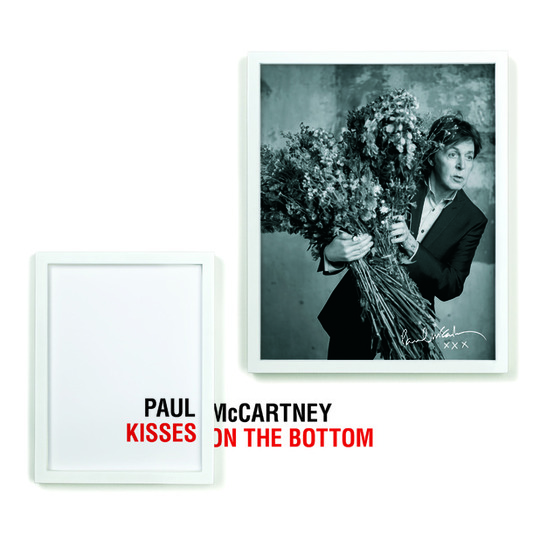 Regrettably, Kisses On The Bottom isn’t the ode to anal activities that we have all been waiting for from Paul McCartney. Instead the album title is a lyric taken from Fats Waller’s ‘I’m Gonna Sit Right Down And Write Myself A Letter’, one of 12 tracks covered by McCartney here that he was first introduced to by his dad. There are also two original McCartney compositions on show: ‘Only Our Hearts’ and ‘My Valentine’. They aren’t exactly stand out tracks, with ‘My Valentine’ being the cringeworthy love song that you might’ve anticipated from the prolific long-haired geriatric lover from Liverpool. Yet, when you consider this is a record made up of classic(ish) songs such as ‘The Glory Of Love’, blandness in such esteemed company should be considered a compliment.

It’d be dismissive to say that McCartney is merely on auto-pilot here. The production is as professional as you’d expect, and the vocals and arrangements are spotless. ‘Home (When Shadows Fall)’ has a gorgeous string section, classic McCartney schmaltz. Yes, surprisingly after nearly 50 years working in studios h'se picked up a couple of things.

Joseph Heller, when asked why he hadn’t written anything as good as Catch-22 since its publication, replied that no-one else had written anything as good in the preceding years either. With McCartney’s stature and back catalogue, a similar defence can be used. Though you could also say that few have written anything as bad as his single ‘Dance Tonight’ over the years either; evidently the coin has two sides. Relevance is the real issue. Who buys Paul McCartney albums, and what do they expect? Kisses on the Bottom is okay but it isn’t exactly The White Album. It was never going to be The White Album.

What we’ve got is Paul McCartney 'The Jazz Lounge Years'. Almost as if he is auditioning for a gig on a cruise liner. Maybe there is an element of him using his clout to open the door to a few forgotten artists from yesteryear. I personally hadn’t heard a lot of these songs before now and there are a few, like ‘The Inch Worm’, that I’m grateful to have been exposed to. But there are better vehicles than a sickly lacklustre covers album to achieve this education. Bob Dylan has a radio show called Theme Time Radio which is an amazing resource, well worth investigating. Dylan will happily pass the spotlight onto other artists, showcasing the original energy and talent that got him excited and inspired in the first place, sadly Paul can’t help but elbow his heroes back into obscurity and perform jazz hands for the adoring public. He clearly loves the attention, but if he did a similar radio show documenting his record collection and inspiration it would be peerless (except for Dylan’s, obviously). Clapton makes an appearance here, evidently still trying to singlehandedly bore the world into a coma. Sure he can still play guitar, but Mussolini could run a country pretty well. It doesn’t mean it is necessarily for the benefit of mankind. Supposedly Stevie Wonder makes an appearance somewhere as well, but he must have been drowned out by the bleep of my life support machine.

Such relaxed saunters down musical memory lane have been done before, and often better. You’d have thought that after decades of being haunted by substandard cover versions of ‘Yesterday’, McCartney would’ve been aware of the potential pitfalls before him. Maybe it is just an itch he had to scratch; maybe it is a cunning plan to edge closer to the end of a recording contract, one beige album at a time. No-one really knows.

Paul isn’t dead, yet. Though if he saw the potential profit margins for a posthumous artist of his standing, I bet his inner businessman would be temporarily tempted. There’s definitely life in the old dog, best exemplified on the live circuit where he is untouchable. Unfortunately what we’ve got here is a boring album that seems even more turgid because it is from an exceptional artist. We want better, but gradually expectations lower after each new album.

I’ll see you at the next stadium gig Paul, presuming your secret police haven’t assassinated me for this indifferent review before then. Please forgive my insolence, you were always one of my favourite ex-Beatles.