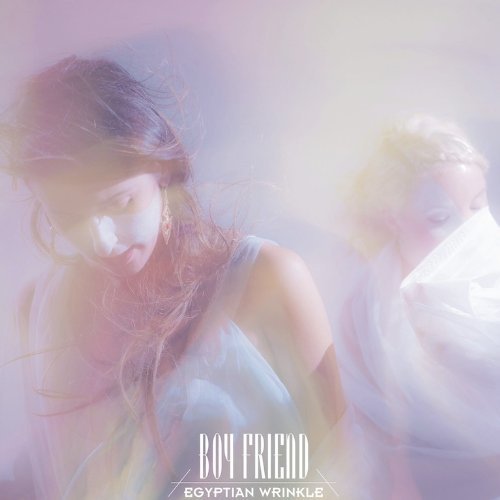 Think of Egyptian Wrinkle as like a stay in hospital: white sheets and monochromatic décor, inane muzak streaming in loop from a seemingly everlasting TV show.»

rough trade exclusive with a bonus five track cd featuring 3 extra tracks and remixes by themselves and alex degroot. for fans of early 4ad, warpaint, sleep over and air. boy friend is best buds christa palazzolo and sarah brown. with a creative partnership that combines different stylistic preferences and attitude with a passion for fantasy, narratives and dreamy, lovesick lyrics, their song writing is led by strong lead vocal and guitar melodies layered in harmonies, ambiance, and thick atmospheric backdrops. the two have collaborated on several projects together in their 15 year friendship, but it wasn't until the end of 2010 while going through the break-up from their last band sleep over that they regrouped to record their first ep as a duo. it was a heavily charged 'break-up' album disguised in hazy undertones and big choruses. the following spring they recorded their 'lovedropper' 7", and by summer of 2011 recorded their first full-length, entitled 'egyptian wrinkle', in a friend's house in north austin surrounded by dogs, bongos, and plenty of warm texan vibes.
description from www.roughtrade.com