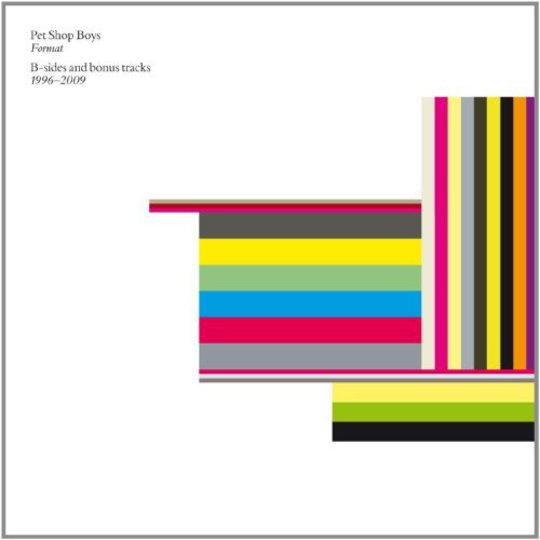 You know the drill with B-side and bonus track compilations, that’s where they stick all the sub-standard stuff. What’s more, Format is a compilation of B-sides and bonus tracks from the Pet Shop Boys circa 1996 – 2009, arguably not the best half of the band’s career. But of course narratives are there to be busted so let’s look at the positives.

The glam electro stomp-opener of ‘The Truck Driver and His Mate’ is irresistible. It would take a sombre individual indeed not to at least tap their foot when the joyous female backing vocals kick in alongside Neil Tennant’s innocent-sounding “aaahhh”s. Tennant goes on to sing about “acting out compulsions” and other such joys whilst “the destination can wait”. The lyrics are fairly ambiguous but I like to think it’s about cruising and not just going on a detour to pick up a particularly rare mechanical part.

I have always found Elton John’s music to be extremely bland and annoying but the Pet Shop Boys do well with him on ‘In Private’. The song is a duet between John and Tennant about the frustrations of being stuck in the closet with a wife and kids or being stuck being in love with the guy who’s stuck in the closet with wife and kids. And it all sounds like a pseudo-Broadway show song which is something the Pet Shop Boys do rather well.

There are some definite misses on the album. ‘We’re the Pet Shop Boys’ becomes irritatingly self-referential with slightly embarrassing computer-voiced references to the Pet Shop Boys’ old hits. Perhaps it’s meant to be funny or ironic and I just don’t get it.

Pretty much all the tracks on Format sound like one would expect the Pet Shop Boys to sound like by now, Tennant’s trademark nasal vocals with some epic or downbeat sounding dance music and camp pop sensibilities. This can be amazing at times but sometimes it feels a bit too formulaic; just stick in a house beat and some deadpan social observations and you have yourself a track. Admittedly the Pet Shop Boys are really great at this, but you can also see why they’re also quite easy to parody. Still there’s no denying Format was made by pop geniuses; maybe pop geniuses being slightly hit and miss, but that’s still pretty good.