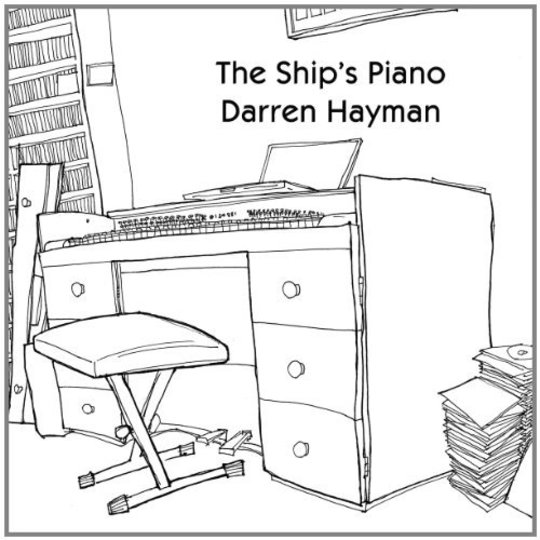 Do you remember the moment you became emotionally immune to the thrill of watching bright lights flicker across the night sky? It is, as pivotal moments go, a real shit: say ta’ra to backseat car rides of an evening, gawping into the abyss as highfalutin thoughts abound of lasers and magic and creating tentacled offspring with purple UFOs; and hello to fascination-maturity, the astrological wonder of yore scarcely returning to remind you it shone in the first place. The music of Darren Hayman is like when, ten years down the line, there’s a shooting star or meteor shower or just a really jeffing superbly bright thing up there, and suddenly all the trinkets of childish fascination you abandoned become interesting again. And you have to hand it to him: beyond turning up on your doorstep with a long-forgotten childhood sweetheart and her willing hand in marriage, that’s effectively as much as you can ask for from a largely solo recording artist.

Except, well, instead of reigniting intrigue around lasers and magic and creating purple offspring with UFOs, Hayman’s more likely to be yabbering about, like, chatting to old friends and making silly twentysomething mistakes and creating gap-toothed offspring with needy members of the opposite sex. Which perhaps isn’t the most tantalising prospect, and yet the Walthamstow-dweller - who was not, you suspect, the most popular kid in his class - evidently has a peculiar way with a grown-up heart. What his domestic greys are tinged with is the strangely poignant sparkle that tends to be spat up by otherwise unspectacular lives.

“We were simply grooving / The hipsters started laughing

The way that we were moving / A little out of time...

That, opener ‘I Taught You How to Dance’, is for better or worse typical of The Ship’s Piano (a colloquial term for the type of small-scale piano these songs were written on) in that it’s almost staple Fidelity Wars Darren H material. Since unicycling along the tightrope between naivety and insight with that record’s authors Hefner, the chap’s become diametrically opposed to the Holden Caulfield archetype you fear he might have fallen well deep into. So what’s interesting is that, upon giving the ’new town’ focus of his last couple of records with the Secondary Modern a rest, he’s returned to write songs about loneliness (’Old House’) and “the kind of girl who never wore a skirt” (’Josephine’) and ’serious’ - joylessly serious - relationships (’Take a Breather’). You know, the usual stuff.

But let’s not rush into aligning The Ship’s Piano - a record you’d be forgiven for considering a stopgap before Essex III: Return of the Secondary Modern - with its rich genetic heritage. Unlike the Essex Trilogy, and really anything Hayman’s released through his various guises, the record has a highly intimate, minimal setup. Which works, sure - and perhaps gives this a broader appeal than its recent predecessors - but man-and-piano arrangements aren’t necessarily the most natural environment for Hayman’s ratty mew. Admittedly this development would be more worrying if it hadn’t been logistically necessary. During recording, Hayman was cooped up in bed, having been assaulted after a gig in Nottingham in late 2009, and The Ship’s Piano - which follows his January Songs project, itself due a deluxe full-release in January 2012 - started out as simply a way of passing time without exerting too much energy. Which needn’t be fundamentally problematic in terms of listening to the thing, but in fairness it probably shows: even sidelining the fact most of the pianos here sound like they have just ambled home to their wife after 24 hours’ drinking Courvoisier in a local sex bar with plumes of Camel cigarette smoke and tattooed drug-wenches growing on trees (not to mention discomfitingly brutal lyrics like “Are you worried? / I am worried too / Don’t let it beat you black and blue / Or split your head in two” on the sweetly lilting ’Cuckoo’, and yet more direct, “I’ll think it through whilst the fists fly / And the skin tears from the knuckle” from retirement-baiting ’Think it Through’), this fourth LP is also possessed of an odds-and-ends kinda feel; soldered together by the singular circumstances of its recording, rather than any binding thematic intricacies.

But what does that matter to the casual newcomer, undaunted by overbearing expectations? S’no biggie - while a cynical argument might linger that the guy seems to wish/believe the key to every low self-esteemed lady’s immortal happiness sits in his sweaty Brentwood palm, there are surely few who’d put the guy’s poetic way with an ’our song’-making turn of phrase to the sword. Nonetheless there is, sadly, a nagging sense that for this particular record’s swelteringly lofty highs (self-explanatory platonic love song ’It’s Easy to Hang With You’ being another), Hayman’s insistence on recording the album he says he “wanted to hear,” after the awful affair of being beaten to a whimpering pulp, has knocked a lick of its wry fire out.

But in the main The Ship’s Piano does the man’s old trick like magic: if he is not a touter of wordy bells-and-whistles, Hayman is regardless a master of simultaneously writing powerfully and underwhelmingly. And if he’s not yet unanimously considered the greatest cardigan-stylee speccy-sporting dweeby loser type songwriter-man of recent decades, he’s surely on his miserable, merry way.