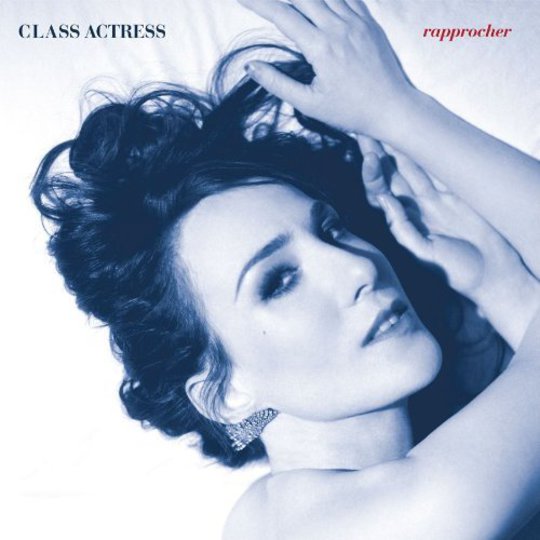 In her guise as the frontwoman of Class Actress, Elizabeth Harper appears to be going great guns to cultivate a public persona. This is acceptable behaviour, as Class Actress make painstakingly stylised analogue synth-pop with dramatic lyrics about failed or tempestuous relationships, and this is a sphere where a fantasy world can fuel great work. However, you have to really like Rapprocher, their debut album, for it to come off; if you find these 11 songs shallow and unedifying, chances are you’ll have a similarly adverse reaction to press photos of Harper in suspenders and interview quotes like 'My undergarments are usually more expensive than my jewellery. But that’s mostly because I tend to leave them on bedside tables.' A lot of folks ain’t too hot at recognising jokes, I suppose, likewise incredible pulsating rainy-day-on-a-fantasy-island emotional club smashes.

In truth, I have no way of knowing how much of Harper’s efforts to play up the ‘heartbroken aesthete dripping tears and Ketel One onto a poetry anthology’ side of things is rooted in reality. What we can work with in the meantime: she lives in Brooklyn, having grown up in LA. She released a solo album on Angular Records under her own name in 2005; listening back, it sounds a bit like The Sundays. Class Actress was born after she enlisted Mark Richardson to write and produce everything, with Scott Rosenthal also on board. The trio released an EP last year on the bassist from Grizzly Bear’s label, which rocked much the same moves as this album but with a tinnier, more impoverished sound. Harper’s notable activities of late include being part of Girl Crisis, who videotape themselves covering karaoke standards and upload them to YouTube, and appearing with Freddie Gibbs on an entirely baffling version of The xx’s ‘VCR’. This album makes all of that feel like Harper was just biding time until the unveiling of her true calling.

Considering it was recorded in the vocalist’s apartment, Rapprocher sounds huge: deep bass pulses that sometimes take songs (‘Love Me Like You Used To’, ‘Missed’) closer to early Eighties black electro than ‘icy’ side-parted synth action. A logical point of connection might be the productions Arthur Baker and Shep Pettibone turned in for Madonna and the Pet Shop Boys, guiding both acts onto dancefloors on which they might not have otherwise passed muster. Richardson’s keyboard parts often approximate the narcotic squeal of the old funk and disco records that later got splashed all over Nineties G-funk cuts – ‘Prove Me Wrong’ being a sterling example.

Really, though, this just goes to prove what you can do with a stack of vintage analogue gear and three or four decades of music powered by the same. Class Actress’ reference points, aside from those already mentioned, are predominantly European: The Human League, Depeche Mode and Soft Cell; Italo disco classics, especially when the likes of ‘Weekend’ and ‘Hangin’ On’ bring the ecstatic synth riffs in; more contemporaneously, Goldfrapp, The Knife and Wierd Records minimal wave rehashers like Automelodi (who aren’t European, but might as well be). ‘Limousine’, while an essentially strong song, may be the one case of a style being bitten too obviously – rerecorded with male vox, it could slot onto either of the first two Junior Boys albums, and the chorus sounds a heck of a lot like Massive Attack’s ‘Be Thankful For What You’ve Got’.

Harper herself doesn’t appear to be gifted as a singer or lyricist, but the history of synth-pop has very few frontpeople who could be described thus – maybe none at all. What’s important is that it works with the music, in all its cable-fizzing propulsive splendour. The juxtaposition of the verse and the chorus on ‘Weekend’ (“I pace the room every time you leave / I fall apart from because you’re all I need” versus “Bring it on, bring on the weekend!” belted out in a higher register) is textbook manipulative pop. If there’s one song on Rapprocher you can imagine a broke and desperate Class Actress flogging to, say, Girls Aloud, it’s this one.

Although the sonic relationship between CA and other notables in the modern charts – Lady Gaga, Robyn, Nicola Roberts – is fairly obvious, it’s also tangential. If this album becomes a breakout success (a big if, given it’s being released by a recovering IDM label), Harper will doubtless ‘become’ Class Actress in the layman’s eyes, in the same way that Elly Jackson and La Roux are interchangeable to most. Richardson’s productions are nowhere near as clipped and digital as those of Ben Langmaid, though, or pretty much anything else that gets onto daytime radio. As such, it’s hard not to imagine Rapprocher being a dual praise magnet/success repellent, crushed on by the same people as popjustice.com white elephants like Annie, Little Boots and Sally Shapiro. Seriously, though, this is a fantastically arranged and conceptually exquisite record, and as much as it feels like anathema to say that a contemporary pop highpoint has sprouted below the surface, in the case of Class Actress it’s true.