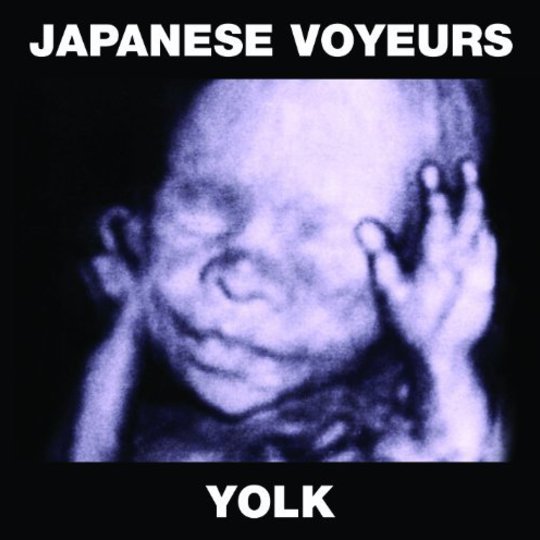 It feels a personal defeat to be reduced to filling my own reviews with the same, tired buzzword comparatives as every other review on the net for this record, but there’s no avoiding the use of the word ‘grunge’ when you talk about Yolk - debut full length from long-time touring machine Japanese Voyeurs. I suspect that a fair proportion of mouse cursors have darted to the top right of the screen already in flight from that word, but shake off your festering reservations about a genre which ‘died’ 15 years ago, and you’ll find that this record has plenty to recommend itself aside from being any sort of lifeless retread.

Undoubtedly, the scuzzy riffs and pounding rhythms often sound like an alternate version of early Nirvana (listening to the guitar lines on songs like ‘Blush’ can make you want to go back to Bleach and check it isn’t an outright homage,) and they make no attempt to cover their tracks or hide their obvious influences. It’s an admirable quality in itself, that a band can embrace the music they love without paying any regard to what’s zeitgiesty or cool in the hipster taste making universe. But what’s even more interesting is how Japanese Voyeurs never quite sound as if they’re actively channelling the past for the sake of it. This is grunge, sure, but I’d be reluctant to label it grunge revival. Unlike so many current acts who mine the past purely to package nostalgia, Japanese Voyeurs make music which sounds like exactly what it is: a dark, menacing and energetic explosion of the sort of music which they really love, now.

So there’s a likable sincerity to the band, and to their music, which manages to sidestep the accusation of this record being a drab flogging of a two-decade old horse, but then we turn to the next divisive component of this band: Romily Alice. Her singular vocal style is going to repel as many fans as it attracts; snarling and whining in a high-pitched girlish tone. Within about six seconds of her opening her mouth during the opening track ‘You’re So Cool,’ you’re likely to have made up your mind definitively: either this honey-drenched, fag-throated hybrid is the linchpin to your whole enjoyment of Yolk, or it's your predominant reason for turning it off almost immediately.

Me, I find Romily’s voice to be not only arresting, but outright impressive. Her skill in both searing a hole in your ear, such as in the buzzsaw chorus to heaviest cut ‘Milk Teeth,’ as well as to guide the band through a sugary pop melody, like the more skate-punky ‘Cry Baby,’ is made all the more impressive when she displays an ability to get her throat around this range within the space of a single verse or even a single line. Romily adds a real dynamism to these tracks, turning what could have been fairly textbook grunge-punk blueprints into far more expressive beasts altogether - all the while keeping the songs as the summery blasts of melodic hardcore which July weekends were made for.

As I’ve said already, Yolk is going to be a divisive record, for more than one reason. Plenty of people aren’t going to buy into the band's unapologetic evocation of a genre which make so many eyes roll, and just as many people are going to dismiss Romily’s vocal performance as needlessly affected and a little too try-hard. However, if like me you come down on the other side of the fence on these issues, then you might find yourself with a real taste for Yolk. Combining outright ferocity with smatterings of vocal flair and summery hooks, Japanese Voyeurs have provided a vivid musical accompaniment to the sweaty months of summer.