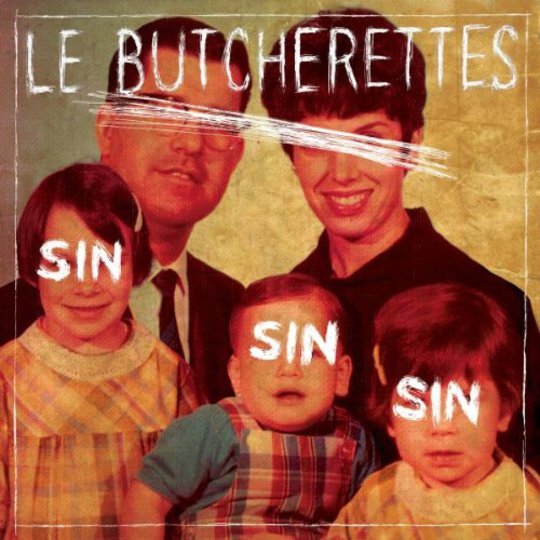 Le Butcherettes' live shows sound phenomenal. Featuring fake blood and decapitated pigs heads, this Mexican three-piece clearly excel in provoking a reaction from their audiences. It is for this controversy courting success that they’ve been invited on tour with the Yeah Yeah Yeahs, The Dead Weather and The Walkmen. Why then does their debut album, Sin Sin Sin, come off so tamely in comparison?

“In my mouth, in my thigh, in my rib, in my backside, in the middle of my sleep, all you wanna fucking do is rip right through,” hollers front woman Teri Gender Bender with her sweet, venomous tongue on album opener ‘Tonight’. Actually, that’s about as shocking as the entire album gets, a perfunctory allusion to sex and violence. It might keep a Daily Express writer up all night in a cold sweat but anyone familiar with Bikini Kill or Bratmobile will have heard much more outrageous fare, albeit played with the same raucous energy. Sin Sin Sin is not helped in that comparison either by an extremely slick production job which brushes almost all rough edges off ‘Henry Don’t Got Love’ and ‘I’m Getting Sick Of You’. ‘The Leibniz Language’ sounds practically radio-ready which, given the track flits between a creaky synth line and barks of “Bruno was a classic”, is an achievement as futile as an Amy Winehouse comeback tour itinerary.

For a punk band, Le Butcherettes don’t half drag out their tracks either. ‘I’m Getting Sick Of You’ has no deep philosophical message to convey other than its titled message and still manages to drag on for a whole four minutes. Likewise, ‘The Actress Who Ate Rousseau’ is essentially the line "I’m hungry for more” repeated until tedium kicks in. The wholly instrumental ‘Riko’s Smooth Talking Mothers’ is more like it, cavorting between chopping guitars and crashing cymbals, it is a testament to the benefits of brevity.

When Gender Bender and her motley crew trim the fat off their tracks they tend to swell with the same passion one imagines their touring incarnation does. ‘Dress Off’ is a backs to the wall squall comprised of only a caustic drum beat and a barking vocal take, ‘New York’ holds an inscrutable swagger built from a clanging guitar rhythm which crescendos in glorious power chords and ‘Bang!’ rockets with all the force of its “You love me, you love me, you know you want to kill me” chorus line. These Le Butcherettes offerings pack the greatest punch when sparing in the smallest space possible.

It would be easy to lay in to the band for failing to live up to their provocative name but the overall impression of Sin Sin Sin is one of a collective not far off from hitting their stride. Most punk bands are a victim of their unrefined qualities but Le Butcherettes need to reign in their more palatable tendencies to make a great record. When their live shows feature Teri Gender Bender’s public urination, this is not likely to be a problem.