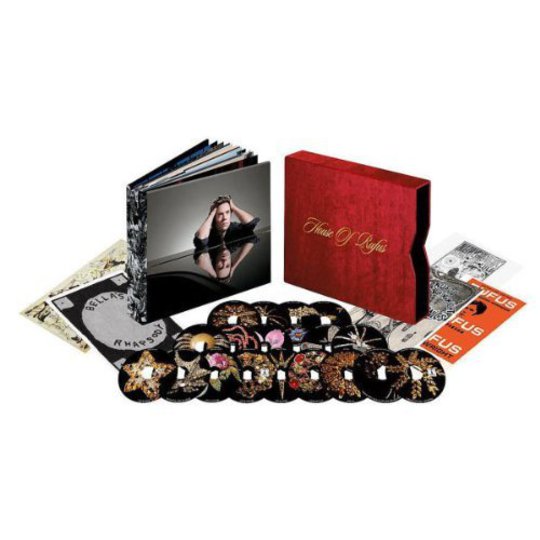 How on earth do you sum up a career like that of Rufus Wainwright? One that encompasses pop, folk, middle-aged housewives lusting after their art teachers, composing your own opera and reincarnating Judy Garland in your own image?! And that's not even the start of it. Wisely, then, Wainwright has decided that now the time has come, the answer to the dilemma of 'how to summarise my career to date' is: don't even try. Hence House of Rufus, with its six studio albums, two live albums, four CDs dedicated to rarities and non-album offerings, and six DVDs. I've probably missed the hidden bonus CD of Rufus making an album by imitating woodland sounds with his nose.

While the box set coincides with Wainwright's five-night residency at the Royal Opera House, its aim is really to be a blow by blow history of the artist and the man - both of whom are undeniably fascinating. With that aim in mind, this is very much a 'for the fans' set. When it comes to the six studio albums, my own favourites were always the Want double bill, and I'd forgotten how much 'Gay Messiah' made me laugh, or just how huge that chorus in the otherwise paranoid-as-fuck 'Go or Go Ahead' really is. One of the brilliant things about Wainwright is that anybody familiar with his work will have their own favourite albums; this provides a great excuse to go through the back catalogue and argue about them all.

Wainwright's unparalleled diversity as an artist, particularly within the additional material, does give rise to some surprising - but not entirely unwelcome - 'er, wot?' moments. Take Rufus at the Movies, the first track of which is his contribution to Eighties movie Tommy Tricker. Almost certainly the oldest work in the boxset - and easily the cheesiest - if it had been omitted nobody would be any the wiser. Yet its inclusion - admittedly as a curiosity probably likely to only be listened to once or twice - amongst the better-known covers that brought Wainwright to a wider audience serves to highlight that this really is an 'everything including the kitchen sink' set. And yes, 'Hallelujah' is here too.

Rufus Rarities, meanwhile, is a fairly standard offering of the authorised best offcuts, with 'In With The Ladies' and 'Ashes' being among my personal picks. Truth be told, though, we all know the most fun rarities are the ones we've had to dig out via toil, trouble and shady dealings with other fans. And the best ones are usually the ones that the artist has disowned in a strop as 'not representative of my true artistic self.' Nonetheless, the offerings here are of generally higher quality than the usual album rejects that artists tend to put out as B-sides and hidden tracks.

Elsewhere, Family and Friends is a testament to the faintly ludicrous number of contemporaries lining up to work with Wainwright. It'd be showing off, if Wainwright wasn't so inherently theatrical to begin with. From 'Casanova in Hell' with Pet Shop Boys to 'Down Where the Drunkards Roll' with dad Loudon, it's a pretty lovely index of the gazillion influences responsible for Rufus's output, whether they're a member of his family or not.

It's the last of the CDs, where we double back on Wainwright's career to the early demos that got him signed, that provides the most marked signs of a journey, especially when comparing the early versions of 'Foolish Love' to its album equivalent. Generally standard voice plus piano fodder, the demos are really about Rufus's beginnings in the pubs and clubs of Montreal, highlighting the fact that the performer was always there. And that's really the point of this entire set: even when you remove the family connections, the endless collaborations, the grandiose aspirations, this fellow was always the real deal. In its own way, it's the answer to the eternal fan squabble of 'you weren't there when he played to two people.' Well, you still weren't, but it's a nice way of making every fan feel like they could have been.

A more comprehensive collection of an artist's career to date, you'd be hard pushed to find. The songs are of universally high quality - surprisingly so for a collection like this. And it's always nice to have everything - or, at least, the vast majority of it - in one place. All that said, it's unashamedly for the hardcore, not least because of its eye-watering £150 price tag. Thing is, if you are a huge fan, odds are you already own an awful lot of this material. And if you're not a fan, well, this box set isn't going to convince you. But the sheer attention to detail sets this compilation apart, feeling more like an 'end of part 1' than anything else. Yes, it's a cash-in box set - but it's a Rufus cash-in box set, with enough on offer to keep the dedicated happy. And, if that price tag comes down, perhaps some more casual fans too.