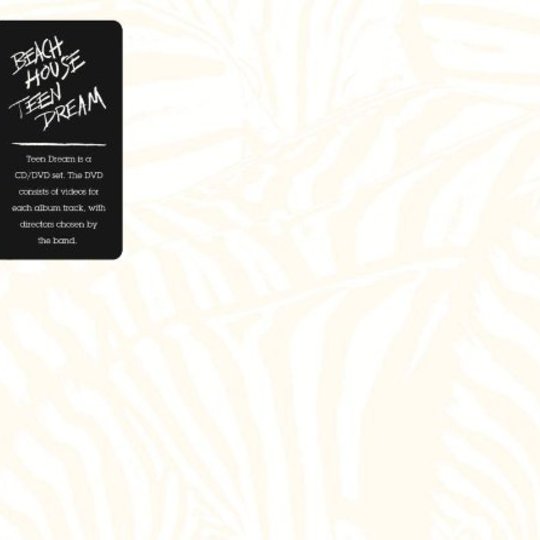 Back in the mid to late Nineties, one of the most egregious insults reserved for a record was to suggest it was the kind of thing that’d go down well at a dinner party. In retrospect this was a rather strange criticism, partly because it seemed to frequently be hurled at relatively avant garde trip-hop types (typically by journalists extolling the virtues of The Verve), partly because it came with the inference that, by contrast, house parties were presumably all wonderful punk rock musical meccas.

Fast forward some 15 years and it's fair to say we've changed.Nobody will hear a bad word said against Led Zeppelin, The X-Factor is enjoyed by all, regardless of actual musical taste, and the only song in the current charts is Journey’s ‘Don’t Stop Believin’ or covers thereof. So it’s hopefully no insult in 2010 to say that Beach House’s third set, Teen Dream, would be a fine accompaniment to some After Eight mints and that naughty second digestif.

Sedate of pace, warm and soulful of texture, gentle of volume, and with a slightly background-ish quality that’s frequently punctured by the magic of singer Victoria Legrand’s almost supernaturally improved larynx; Teen Dream is a comforting record, not a demanding one, and there’s no shame in that.

Indeed, at times that comfort is very literal: the first three minutes of closer ‘Take Care’ go by in a pleasantly beige harpsichord blur which sets up an outro dazzling as an unexpected shower of stars, layer of layer of Legrands declaring “I’ll take care of you, it’s true” with such rich, unvarnished humanity that you kind of want her to be your mum or something.

In terms of the journey that Legrand and partner in crime Alex Scally have made to get here, it’s a bit of a funny one. Superficially Teen Dream sounds very little like 2006’s detached, Will-o’-the-wisp enchanting 2006 debut. Beach House was a sparse, 4AD-ish dream pop record that doubtless attracted Bella Union boss Simon Raymonde on flattery grounds alone. Teen Dream retains something of that for sure, but Legrande’s thick, throaty, lived in new voice is now so dominant in the immeasurably smoothed mix that the likes of Glass Rock and Sharon Jones and the Dap Kings now seem equally pertinent reference points. Then again, listen to Beach House’s ‘Master of None’ and there’s clearly a Motown thing going on. It’s just that it sounds like it was recorded on a Dictaphone, in the middle of a fog bank, by two people not entirely sure what they were doing. Yet this added an otherworldliness that the far more accomplished, tangible Teen Dream lacks, and occasionally that’s a shame. Beach House have never been a very dynamic band, and without the haunted textures of their first record, near enough every song has a flat bit where you find yourself cooling your heels waiting for something to happen (in the case of ‘Better Times’ and ‘Walk in the Park’, that would be the entire song).

Still, one has to conclude it was basically worth it when Teen Dream is spattered with so many sublime, Legrand-led moments. Some of them are: the bit in ‘Silver Soul’, where the singer first announces just how much power and nuance now resides in her throat, letting out a shaped, steely sigh of “it’s a vision, complete illusion” that’ll shiver your spine to bony putty. There’s the lustrous bed of breathy “ha ha ha ha” vocals that runs throughout ‘Norway’, returning for a final time as Legrand passionately croons the title track over and over. There’s the bit where the minimal piano on ‘Used To Be’ suddenly erupts into a cherry blossom cascade of lush reverb, lustrous synth drone and glittering percussion. The sense of ineffable folk wisdom Legrand manages to infuse into the sultry, wordless “whoa, oh oh” chorus of ‘Real Love’.

So yeah, Teen Dream is kind of MOR, it would go down a treat at a dinner party, there are boring bits and the doleful DIY magic of the debut seems to have more or less run out. But it’s shot through with more than a handful of heartstoppingly wonderful moments, it vastly improves on the (now very transitory-sounding) Devotion, and heralds the arrival as Legrand as one of the finest singers in modern indie. In any case, if it's a shit party it won't be through fault of the music.