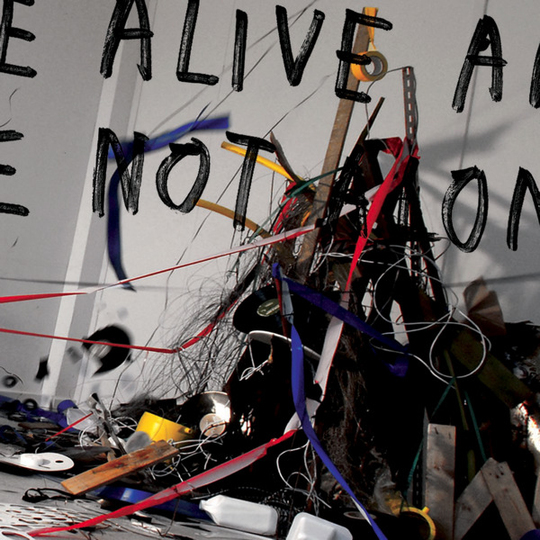 Starting an album with feedback and a brooding stumbling of drums before lurching into a rhythmic onslaught of grating (dis)chords is a rather good plan, isn't it? Well, I think so - and the opening of Popular Workshop's debut album, We're Alive and We're Not Alone, is a rather fine example of the technique.

You would, of course, be justified in pointing out that it's not exactly a new trick; and that quibble could, in all fairness, be applied to much about this album. The jerkily crashing guitars tempered with scratchily clean-sounding rising chords; the reverberating disco-tinted basslines lifting the whole and adding an extra layer of energy behind the already pretty vital tunes; the yelled vocals with occasional whoops and howls and extra-stylised pronunciation to add texture; the sharp and pointed production adding an extra layer of aggression... It's all a little bit post-punk, with a hint of darker Brit-pop; there's a definite hint of Josef K in there, and some Fall, and a bit of Ikara Colt...

In short, you've probably heard most of the ingredients before; but it seems a tad churlish to complain about a certain lack of originality when said ingredients are this well put together. The jumps between different levels of sound are placed exactly where they should be, while still being sufficiently extreme or laced with oddity to maintain a surprising air. Those vocal acrobatics are timed just right to lift the sound; the wails of noise and feedback add just the right amount of depth to the sound; the rhythmic thuds and bounding basslines are played with the conviction necessary to allow the industrial forcefulness not to sound clunky or overdone. And the odd deviation from template - the alien siren wailings or piano played with an out-of-control randomness - fits the genre well enough to complement it while still adding just enough variation to keep things interesting.

Some songs, of course, work better than others. Funkier basslines are one of PopShop's strong points, and the less jerky, more guitar-focused songs sometimes tend to fall down as there's not enough momentum in what you're hearing to sweep you along and let you forget that it all sounds a tad... well... familiar. But on many of the higher speed songs with more life and momentum, the sound is so forcefully gleeful as it pours out of the speakers, that the old tricks come across as fresh and new again and it's a pleasure to listen to it and be reminded of exactly what's so fine about quirky post-punk indie jerkiness.