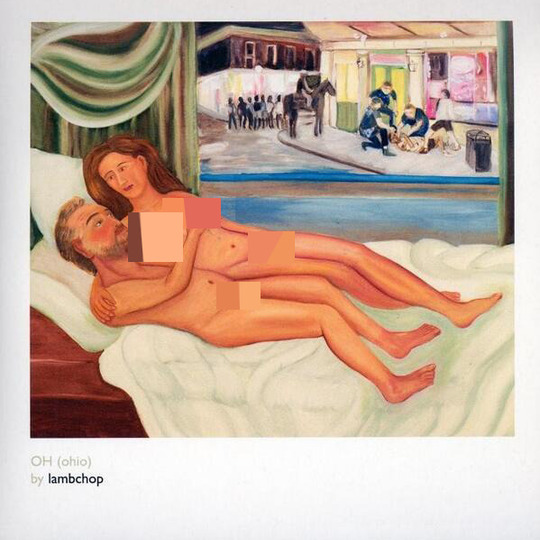 For those unswayed by Lambchop's previous nine albums, it's unlikely that number ten will be the one that refreshes the parts previous releases couldn't reach. While Kurt Wagner's periodically swelling and shrinking Nashville outfit has tended to pride itself on experimentalism of one sort or another, 2006's Damaged and now OH (Ohio) have seen them adopt a musical holding pattern. As a result these last two albums stick closer to the 'typical' Lambchop sound than was ever the case before.

Perhaps due to its downbeat, sometimes diffident nature, it's easy to forget both how influential and unusual that sound - country, rock, folk, jazz and 1980s indie combining to ambient, often trancelike effect - has been. It's also why OH (ohio), like many Lambchop albums, is a work that requires repeated listenings to unlock. If it won't ever prove as deeply engaging as its immediate predecessor (Damaged is, to these ears at least, one of the 'Chop's finest), its satisfying consistency is gloriously interrupted by a handful of memorable moments that arise, typically for this most subtle of bands, seemingly from nowhere.

One of these is to be found towards the end of 'I'm Thinking Of A Number (Between 1 And 2)', a woozy ballad that builds up a devastating emotional charge simply through repetition and understated electronic effects. 'A Hold Of You' cranks these up while still displaying a masterful restraint, its distorted bleeps sounding a little like ailing car horns accompanying the strangled power of the central lyrical refrain.

If the best of OH (ohio)'s songs are slow to reveal their innermost depths, Wagner's vocals are also similarly oblique. On a purely aural level, his voice varies from a Glen Campbell-esque country croon to sounding like an elderly man muttering to himself as he tries to remember where he left the car keys. Even though it remains tricky to hear what he might be saying at certain points, this hardly counts as a detracting influence when his voice, the spider at the centre of the music's intricately woven web, is as much an additional instrument as it is a provider of narrative.

OH (ohio) has its playful moments - such as the upbeat breeziness of 'National Talk Like A Pirate Day' and 'Sharing a Gibson With Martin Luther King Jr.' - but as was the case with Damaged (which was chiefly concerned with the life-threatening illness Wagner endured before its composition), mortality, the messy glories of love and the choice between hope and nihilism remain key themes. As interesting as Wagner's lyrics tend to be, though (when you can discern what he's actually saying from so deep down in the mix, that is), what's most interesting on OH (ohio) in terms of the mood they convey is when the funereal mournfulness of 'Popeye' gives way to a funk-influenced instrumental coda. Again, the effect alters after repeated listens, and something that first feels like an absolute break with the song's prevailing mood comes to appear more as a continuation of the song's arguments by other, non-vocal means.

Elsewhere, the flecks of shoegaze guitar frilling the edges of 'Please Rise' are a fine reminder that while hailing from Nashville, the capital of tradition when it comes to rock and roll in its various forms, Lambchop have always been a musically diverse, internationalist proposition at once embracing and reaching beyond straight-up Americana. That's a fact underlined by the simple beauty of closer 'I Believe In You', a cover of erstwhile mainstream country giant Don Williams' original. Its restrained combination of new and old, tradition and innovation, sums up the strengths of OH (ohio), an album which isn't another Lambchop masterpiece, but rather a fine addition to an extraordinary body of work.