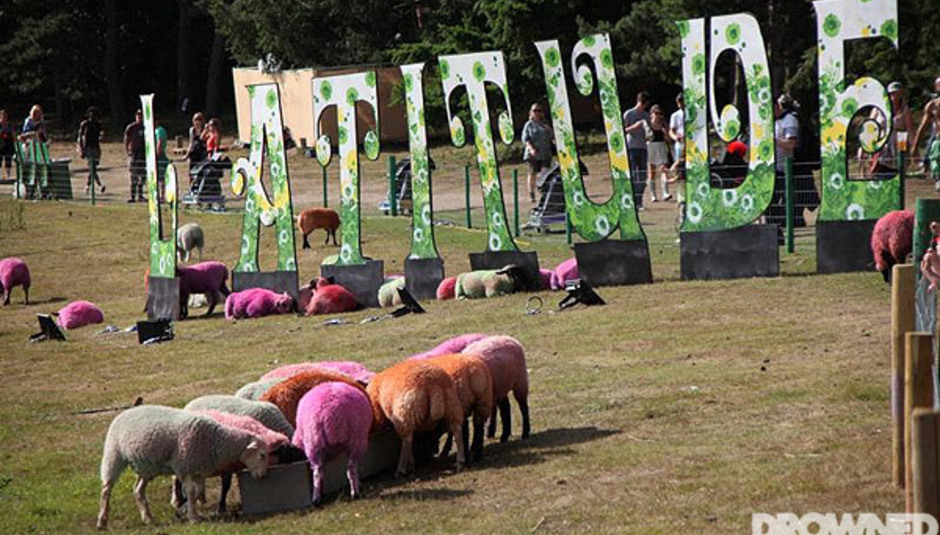 Drowned In Sound are media partners at this year's Latitude festival, bringing you interviews, sessions and daily updates from the site. Here, Dom Gourlay relives his highs and lows from Friday's bill.

Lloyd Cole
The Word Arena, 1pm
Having spent four hours on the road from not-so-sunny Nottingham, my first duty of the day after pitching the tent and unpacking the wellies was to relive the golden days of my youth. Or something like that. Despite having to compete with Cold Specks incestuous noise drifting over from the Lake Stage, his set was a delightful mixture of old and new material that buoyed the sizeable crowd. Assisted by his son Will on guitar, 'Weeping Wine' and 'Perfect Skin' were particular highlights of a set that didn't only roll back the years, but also taught the new breed of singer/songwriters a thing or two.

Destroyer
The Word Arena, 2:50pm
Daniel Bejar might not resemble your typical indie demigod, but as frontman and multi-instrumentalist for his Destroyer project he's a captivating presence. Backed by a seven-strong band, his set concocted images of Cat Stevens moonlighting with The Flaming Lips, i.e. heavenly. Heavily drawing on material from last year's Kaputt long player, the title track in particular raising temperatures as the audience join in with the "chasing girls like chasing cocaine" in reverential unison.

The War On Drugs
The Word Arena, 3:50pm
Making a rare UK appearance here, Philadelphia's The War On Drugs proved a soothing mid-afternoon alternative to avoiding the rain. Straddling the psych-rock and alt-country borderline while never really sounding like either, 'Your Love Is Calling My Name' and 'Black Water Falls' delivering a pastoral ambience over Henham Park's muddy veneer. Someone behind me remarks if Arcade Fire made gospel shoegaze rather than studious chamber pop it would sound like this. I couldn't put it any better myself.

The Antlers
The Word Arena, 4:55pm
DiS loves The Antlers, and with good reason as their last two near-flawless long players ably demonstrate. Earlier in the day we'd sat down for a brief chat with keyboard player Darby Cicci where he told us about the band's future plans. He also revealed what was in today's set but even with the element of surprise extinguished, it did nothing to dampen the spirits when the likes of 'Two' and 'Parentheses' arrive in all their glorious wisdom. New song 'Drift Dive' off the forthcoming Undersea EP suggests the creative well is far from dry just yet, and while this is the only new song aired in a Burst Apart heavy set, its nothing short of a revelation. A rousing 'Putting The Dog To Sleep' closes the show, and for many possibly steals it. Band of the day by far, if not the entire weekend. Yes, that good.

Dexys
The Word Arena, 6:05pm
Kevin Rowland's latest incarnation of Dexys might have disgarded the Midnight Runners tag, but there's no faulting his showmanship. Performing what feels like a theatrical adaption of the band's back catalogue, he's in fine voice regaling classics both old and new to an audience of a similarly diverse demographic. Sadly we don't get 'Geno' but a near ten minutes long version of 'Come On Eileen' kind of makes up for it, even if the middle class clientele and paunchy overweight dads dancing fervently makes it resemble a wedding reception. Of the Royal variety of course...

Lana Del Rey
The Word Arena, 7:30pm
This year's great white hype she may be, yet for forty-five minutes she held the packed Word Arena crowd in the palm of her hand. Despite previous criticisms of her live performances, tonight she displayed an engaging charm and unfased demeanour that delighted all those present. Opening with album favourite 'Blue Jeans', the as-yet unreleased 'Body Electric' suggests the next record could be somewhat darker than its predecessor, her velvet croon a plausible yin to Chris Isaak's dusky yang. The biggest cheers are reserved for 'Born To Die' and 'Video Games', the latter preceded by a front row meet and greet culminating in Ms Del Rey sparking up a cigarette and flaunting the smoking ban in erroneous style. Those still unconvinced really had to be there. Sensational.

White Lies
The Word Arena, 10pm
Possibly the least cool band on the bill, and faced with the unenviable task of having to go head to head with Bon Iver, White Lies actually pull it off with stylish aplomb. Love them or hate them - although judging by the sparse crowd it seems most would rather just ignore them - it takes precisely eleven minutes and three songs for the realisation to kick in that they're actually an excellent singles band. 'To Lose My Life', 'Death' and 'Farewell To The Fairground' might not be flavour of the month with uber trendy hipsters, but here in this setting they create a perfect atmosphere to bring the first day of Latitude to a close.