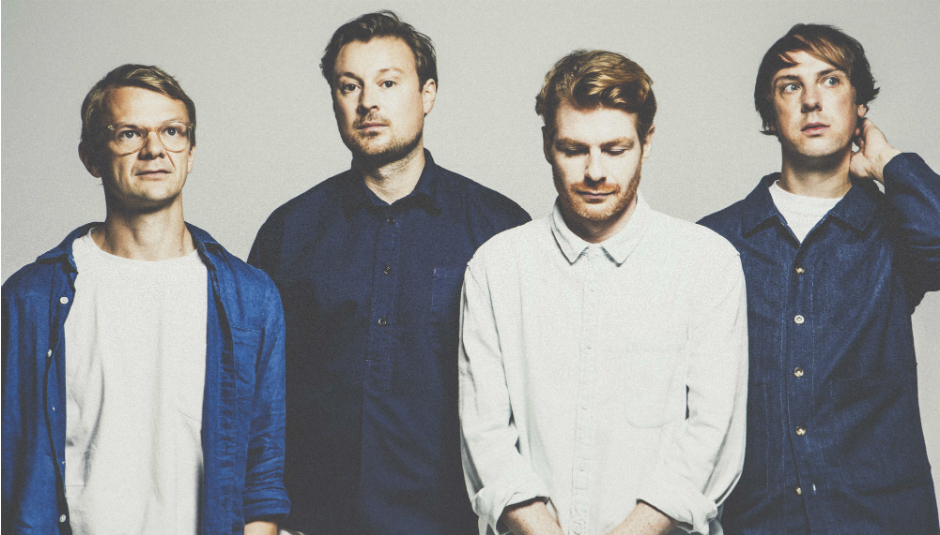 Django Django recently released their third studio album, Marble Skies, their most concise and mature statement to date. The London-based quartet, now as well versed in fatherhood as they are in independent music, have carved their own niche in the ever-growing rock face of new music and have just completed a sell-out European tour.

As they prepare for a summer full of live dates on both sides of the Atlantic, we spoke to drummer and producer Dave Maclean and keyboard/synth player Tommy Grace to chat about their problem with being described as art pop, being told how to use a sample by a prog legend, having Elton John as a fan, and their upcoming EP of new material.

DiS: I think you’re a good representative of this decade in guitar bands, if you even see yourself that way. Gone are the days of indie landfill, now guitars are by no means the lead in bands like yours. Do you think that’s fair?

Dave Maclean: I never thought of us as a guitar band, I think we just happened to have guitars. I never really knew what guitar music was. I grew up listening to a lot of 60s music and everything from funk to pop to psychedelic had guitars in it of some kind. You always have these peaks and troughs of kids picking up guitars and then ditching them, but it’s just another instrument for us. Also, I’m not that aware of what other people are doing, weirdly. We get lumped in with other bands, and half the time I haven’t heard their music. We’re big fans of Hot Chip, Caribou, and other bands that have influences outside of just strumming guitars.

It’s interesting that you never saw yourself as a guitar band.

Yeah, there definitely was a time about ten years ago that was full of generic, repetitive indie bands. Bands like yourself seem to have taken attention away from them.

TG: I guess we’ve always just seen ourselves as outliers and not part of any scene. We don’t really give it that much thought.

DM: I think we exist in a bit of a bubble. When we started out there were a lot of bands coming and going, and I was still listening to 90s jungle, hardcore, and techno music.

Were you all into different things before the band started?

TG: In terms of music, there are more shared interests than there are differences, but there are of course differences. Dave’s definitely more in tune with dance music and stuff.

DM: Yeah I was DJing a lot, didn’t think I’d be a drummer, really. That’s just the way it happened. I didn’t really want to be a DJ either, I just fell between the gaps of dance music producer, DJ, and wanting to write songs. It was always about making the music more for me. DJing excited me more almost than playing live, because you’ve got a bag of tricks and you can change it up every night.

DM: Maybe because I’m at the back, hitting cymbals! These guys up the front get to be at the front and shuffle.

TG: Yeah I do like it. There are really high highs. And we’re pretty consistent now live too.

Is there any area of music that you feel you haven’t managed to weave into the mix yet?

I read that the new album came about without Dave in the room, with the rest of you jamming together?

TG: Yeah, we spent about two weeks in the studio with Anna [Prior, from Metronomy], who’s really great and happy to just play and play and play and not really question what she’s playing, in a way that I know Dave would. It gave us time to work on rhythm sections. We’ve never worked that way, we’re not really a jamming band. I was really surprised how well it flowed and clicked. We just got an engineer to press record and created an absolute shitload of ideas. Two third of the album is based on these ideas that we came up with. And we sent it up to Dave.

And did you re-record everything?

TG: We used a lot of the originals. It’s a bit of a Frankenstein, I guess.

So did Anna end up on the album?

TG: No, just on ‘Marble Skies’, the title track.

DM: She did the beat for ‘Tic Tac Toe’ but I replayed it. There’s an EP coming out soon, and I chopped up her drums on one of the songs.

An EP of new songs?

TG: I guess we must have had about twenty tracks to select from for this album, which was a luxury. With the last album, we just put everything on it. This time we wanted to be more concise. So there was quite a lot left over, so the ones that were more complete, we’re going to put on an EP to be released later in the year, maybe after the summer.

There are more collaborations on this album than before. Rebecca from Slow Club, now going by the name Self Esteem, sings on ‘Surface to Air’. Have you known her for a while?

DM: Yeah, for years. I produced her solo stuff, so it was an easy thing to get her in. The top line of that song sounded like she should sing it. I really love how it turned out with her on it, I think it’s a really strong pop record, and it’s nice to broaden your horizons and do something unexpected.

TG: Yeah, we didn’t sit in the room and have a writing session with him! Dave came to me with a tiny piano loop and asked if I could do something with it. So I learned how to play it and then added a bridge and a chorus section. Once we’d got it all done, we sent it off to Jan and asked if it was ok, because we needed to split the royalties. And he said, “Oh yeah, it’s great, I really like what you’ve done, but you’re playing it all wrong!” So I tried playing it his way but we had to go back to him and say we quite liked the way we had it first time! He was alright in the end.

You mentioned Anna Prior from Metronomy. I’m sure you’re not going to like this, but you both often get described as ‘art pop’…

DM: I hate that. Art pop and art rock, they don’t make any sense. I mean, we went to art school but it’s kind of irrelevant. So did The Beatles and a million other bands.

Would there be another phrase you’d be happier with?

DM: You just don’t need them!

TG: I wish there was.

DM: People get obsessed with this, it’s happened for as long as I remember. If a band doesn’t fit into a pigeon hole, they’ll create one.

TG: I can understand way back with print media, if you’re trying to describe what a band is like, it would be difficult for the reader to listen to it, so it made sense. But now, you can just give it a listen straight away.

DM: Art pop winds me up the most. It reminds me of people using the word “music” in a context where it’s as if it’s a tie with a piano on it. “Look, it’s music! With musical notes!” How base can you be. Everybody who’s making music in an artist, from the record sleeve to the stage show to the craft of making a song. This thing of being an “arty” band, it’s very frustrating. Especially when you’ve been to art school and worked as an artist, it’s like dumbing it down in a way. I think it came about in the 90s. In the 80s you had just a splurge of mad shit everywhere, completely undefinable, from The Cure to Depeche Mode to white guys making funk records to black guys making psych-rock records. Things got tightened up and dumbed down a lot more in the 90s and it became firm: this is this and that is that. I’m glad it’s dissolving now, it’s much more creative for everyone involved.

I don’t want to ask you too much about the lyrics, because I get the sense they’re not supposed to be read into too much in the first place.

Do you write them together?

DM: Most of the time now, yeah. On the first album it was mostly just me and Vinnie, but these days it’s much more of a four-way thing. We’ll have a theme and we’ll all know what it is and so we can all chip in.

The most obvious one to me was ‘Beam Me Up’. That seemed to address all the several dozen elephants in the room at the moment.

DM: Yeah, everything is shit, someone take me away to another planet. There’s also a lot of talk of time moving forward and leaving things behind on the album, especially on ‘Further’ and ‘Real Gone’. But then again, sometimes I’ll write something in the morning and by lunchtime, I can’t remember what I was on about.

And just finally, you’ve found a fan in Elton John, who has played you multiple times on his Beats 1 radio show. Is the love mutual?

DM: Yeah definitely. ‘Benny And The Jets’ is one of my favourites. I used to play the Biz Markie version of that song quite a lot. It got released on an acetate, I think the Beastie Boys put it out. Iggy Pop played us on his show too, that’s not bad is it.

Marble Skies is out now via Because Music. For more information about Django Django, please visit their official website.

"You don’t need to be political in or...