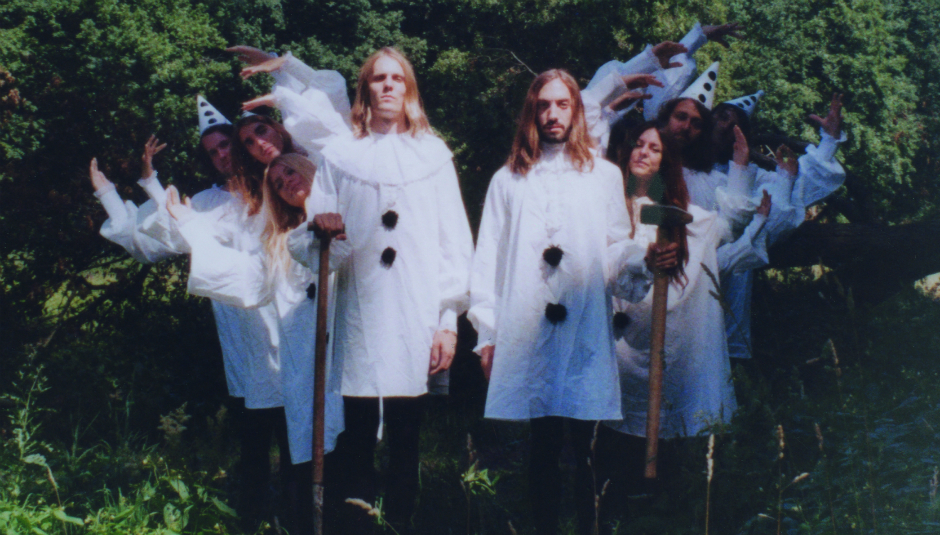 What if you took the riffs from the Black Keys, mixed together with some Can, Tangerine Dream, and poured it through the gutters of Berlin, straining it through the finely webbed garments of Urban Outfitters into the toxic, regrettable, crack-like shine of NME, stapled on a set of finely groomed beards and handsome looks, and told it to go sing on Glastonbury’s Other Stage? You’d get something like Odd Couple, the German rock duo that pump out Jack White-like choruses in German and English, crank out upside-down synth sounds, and monstrous guitar nose.

This is the orchestration of childhood friends Tammo Dehn and Jascha Kreft whose latest album Yada Yada sounds like Queens of the Stone Age without the hardcore drugs and rock n’ roll misdemeanours. And that’s not such a bad thing. DiS caught up with the band last year, enamoured by the previous LP Flügge – a record about seeking independence, and then missing being dependent at the same time – to discuss the band’s energy, mirth, and German weirdness; a sound Josh Homme would only ever dream of achieving. That is if he wasn’t too busy mucking around with Mark Ronson.

The German act is seemingly on the brink of great things. Independent with a cult following, they’ve played slots at Roskilde, Berlin’s Desert Fest, along with a string of European headline shows. Their latest LP was released on Cargo, and is abuzz with niche rock craftsmanship. Originally from a small German town in Ostfriesland, the duo came to Berlin several years ago, ending up living together and creating a little rock nest in the European home of electronics.

Odd Future are stylistically the epitome of psyche-rock-light (let’s face it, they’re not King Gizzard). But speaking to the duo about their music, Tammo and Jascha start off by denying having any knowledge about there being a German psych-rock scene, or having themselves attached to it. Which, with the likes of themselves, Sons of Thyme, Orcales, and Oum Shatt all creating waves in the community, it’s difficult to take this answer at face value. But then again, interviewing German acts can be like this. No matter how adventurous the music is, an almost autistic view of the world can come in tow. These rock heebees, for all of their colour and flare, wild appearance, and rock music, provide a challenging nuance when it comes to describing their music. Challenging or just humble.

Tammo and Jascho actually operate within a community of like-minded musicians, who share roles in various bands. A Berlin-style, Desert-Sessions type landscape if you will. The duo both play in stoner-rock outfit Sons of Thyme and lend their skills to studio-buddies Klaus Johann Grobe, whilst also contributing to the output of Cult Hands, who in turn perform in the Odd Couple touring outfit. It’s like a big, Berlin-psych-circus. “I wouldn’t consider us a psych-rock band,” states Jascha. I press him on the issue further, especially as all the press releases, and magazines, describe the band as psych-rock. “I guess some songs have a ‘psych-rock-sound’ but in general I don’t think that this genre-description fits us. Call it how you want. For me this genre-stuff is something that I don’t even want to think about.”

Influenced by Can from an early age, Odd Couple are now already on the second LP. Their debut, the independently released It’s A Pleasure To Meet You, embodied the act’s grungier, dirt-rock sonic aesthetics. The new LP plays on the expressiveness of Flügge but with more Can, the presence of synths, effects, and analogue distortion ever louder in their music. “Using older technology is more of an aesthetic decision than nostalgia,” explains Jascha. “We like analogue, mechanic things.”

Flügge kicks off with ‘Haste Strom, Haste Licht’, a sing-along anthemic rock-belter that plays into the notion of ‘being connected and disconnected at the same time.’ It’s a resonance that plays throughout the record, the #firstworldproblem pains of being a millennial. But pains they still are. Odd Couple are a modern band for a modern generation, independent musicians singing about a lack of independence. ‘Gone Solid’ is a song that on the face of things is about shaving off your beard, but as Tammo explains, is actually about “the moment you take off your veil and the person in front you realizes who you really are.” The album’s title, Flügge translates as the readiness for flight, or to leave the nest. And although these themes play throughout the record, sonically these German rock figureheads have already taken flight, taking inspiration as they go. “Figure out what you want and do what you want,” says Tammo. “I wouldn’t say that I have reached this, though.” There’s still time

Yada Yada is a one-up on everything they’ve done before. Touring throughout Europe, including an appearance at London’s epic Old Blue Last, the band have finally taken off, leaving their nest behind with seven-minute songs and a new band member (shouldn’t that be Odd Trio then chaps?). There are more journeys into garage-rock, psych-trauma, and hits that make the sweat bleed out of small-venue-walls. Just don’t expect any exciting interview banter.

Yada Yada is out now via Cargo records. For more information about Odd Couple, including forthcoming tour dates, please visit their BandCamp page.