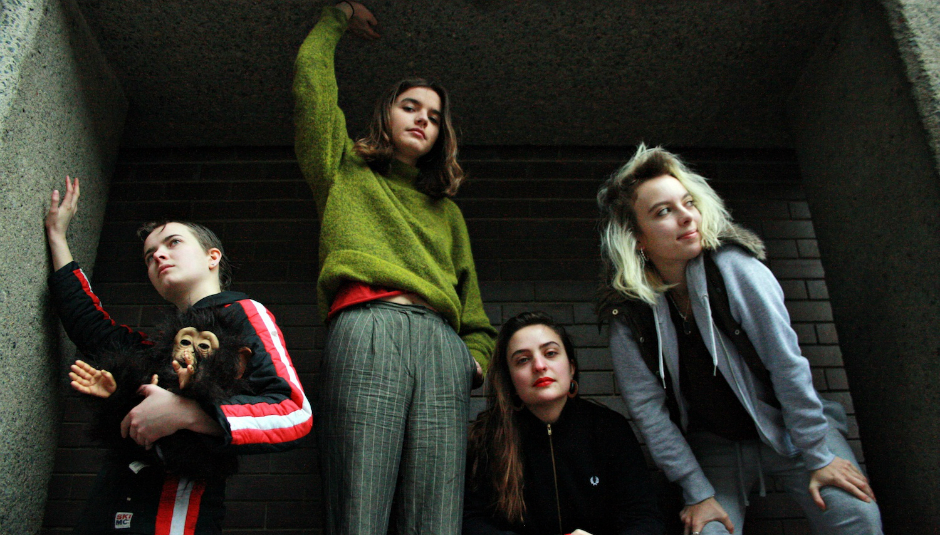 "You don’t need to be political in order to make a statement as a band": DiS Meets Goat Girl

"You don’t need to be political in order to make a statement as a band": DiS Meets Goat Girl

The South London four-piece Goat Girl has been quietly on the rise for a few years now, re-writing the rule book with their defiant, fiery lyrics and DIY sound. DiS spoke to the group’s singer, Lottie, about music getting more political, Black Mirror, and the frustrations of being defined as an “all female” band.

DiS: What’s the concept of your new album, and how much previous material is included?

Lottie 'Clottie Cream': We’ve released two now from the recorded album, which are different to each other, but they’re our more poppy-sounding ones. The album as a whole moves through different genres and sounds. We had this way that we approached it with our tracklisting, so that each song flows into another, and it has a continuity to it, which is important to us. It moves through different sounds as well, it’s kind of like a whole world that’s grown over a very long period of time since we were quite young, so it’s strange that it’s coming out now after all this time of having it anyway. I’m so excited for people to actually hear it. I think it’s quite different to how we play live, it’s more experimental and electronic-sounding.

Is commercial success important to you? What is the main thing you want to achieve by releasing this album?

It’s not a career thing – we’re not expecting to suddenly “make it” – and I don’t think that’s necessarily important to us. It’s more for people to hear us in a different light to how they experience us live, that in itself is important and I want to be able to move people.

Would you describe Goat Girl as a political band?

It’s important to be a responsible songwriter, in terms of just being socially aware, that’s definitely what we touch on with our lyrics. But we’re not specifically political, it’s more like the politics of how we work together as a group, and that’s something that’s important to us. We’re performing together, it becomes almost quite ritualistic, it’s a groundwork of how people relate to each other. But we also have songs that are very political, like ‘Burn The Stake’, which samples from a time when we went to a protest and we heard this chant where people were saying “Build bonfires, put Tories on top”, and we included that in our song. I think our approach is in a humorous light as well, as it’s such a ridiculous situation that we’re in in the current social climate that you have to find the funny parts of it as well.

Do you think other artists should be talking about politics more?

You don’t necessarily need to be political in order to make a statement as a band. It’s important to use your platform wisely, and strive to create conversations that people aren’t having. Artists are very good at that, at realising the importance of what to talk about. It’s just about being a responsible human being and noticing what’s happening around you, especially in a place like London I feel like it’s very hard to avoid.

Has growing up in London influenced your music?

It’s just the matter of London having changed so much throughout growing up, and things like the three stages of gentrification and how it hits. With places that we live, people move there, it’s cheap to live, then you get something interesting going, then companies find out about it, commodify it and sell it to businessmen, and everything explodes into complete devolution, and that definitely influences our work as it’s what we’ve grown up around. It’s hard to avoid and a lot of people are quite unaware of it or naïve to it. You notice it more and more all the time, the wealth gap and how sickening it is and homelessness on the rise. There are a lot of people who try and avoid it and not see it, but putting it in people’s faces, that’s what music’s really good for.

How did Goat Girl form?

I’ve known Ellie and Naima since I was about 15, and we met through a mutual love of similar music and tastes. We were all creating solo stuff at the time, and thought we should all just put it together. At first, it was quite acoustic and folky, then we got more serious about it and decided that we wanted it to become some kind of substance of work, and that’s when it moved towards being amplified. Then we found Rosy, our drummer, at the Windmill in Brixton when we were about 19. So we’ve been all together for about three years now.

Do you think being part of a band with only women has been a good thing or do you see it as a neutral point?

I don’t think you should strive to create an all-female band, that’s not what we intentionally did, it’s just because we love working together and we’re all really good friends; at the end of the day, that’s what you need over everything. That relationship with each other when you know what each other is thinking and this almost telepathic way of working, where one of us comes up with a song and everybody instantly kind of gets it. That’s the kind of connection you need to strive for to build a band, and gender isn’t necessarily important to that. Maybe it is in a way as we’re all female, maybe there’s a certain energy that we have working together because of that, but it’s not something we intentionally went for to have an all-female band.

That in itself is strange, that people see us as a “female band” – not just a band – that you have to have the gender associated with it. It’s something that just doesn’t exist for guys. It becomes a selling point, which is when I have a problem with it. It’s good to use your gender to inspire people, to show that everyone can do it and it’s an open opportunity, but I don’t think people should necessarily acknowledge that it’s just because we’re females.

When did you get your record deal?

We were signed on Brexit, the same day. It was a really bittersweet day, I didn’t know how to feel. I was really happy but really sad, like life is going to be shit but also great. It was a weird one.

Harder to know when people say social media could have been manipulated to influence the vote, it’s a bit like that episode of Black Mirror where they use bees as secret surveillance.

It does feel like we are just in Black Mirror, like Charlie Brooker constantly predicts the future. In a weird way, when he did the pig episode, how did he get that so on point? He’s some kind of whistleblower or something. Did you see that episode where everyone has a score and people have to rate each other?

Yes! I loved that one.

It’s weird the things that do exist, even things like Uber where you rate your driver, and they rate you and you have to keep up your good rating. It’s so weird that we judge people from that rather than actually being a human.

Going back to getting signed, how did that come about?

We had this whole long process of loads of different labels coming down to our rehearsal studio and watching us practice, which was really weird because it was in quite a small room and we just had them sat on a chair right in front of us. I didn’t really know where to look! We were lucky that we have a really good manager who knows a few people who he got down to watch us, then Rough Trade ended up liking us. I also love the fact that it’s mostly run by women – the office is 60 or 70% women – which is something that we wanted to keep with, in a way. It felt like a family unit; you know everyone and what they’re doing for you, and you have that close contact. It felt very safe.

Your album is out really soon, do you have a busy schedule coming up?

We’re touring right now – we kind of started this weekend and we’re back next week to do in-stores, then we have our album party at the Windmill. That’s more about celebrating than about it being our gig; we might just play first so we get to watch everyone else. After that, the tour continues around England and Ireland, and then we’re supporting Parquet Courts in the U.S. in June, which I’m really excited about. I’m so excited to hear us in a different context, I guess. I feel that we’ve been boxed into the indie rock genre just because we play guitars, and I don’t think it’s completely fair. We transcend that genre a little bit with our music.

Goat girl is out now via Rought Trade. For more information about Goat Girl, please visit their official website.