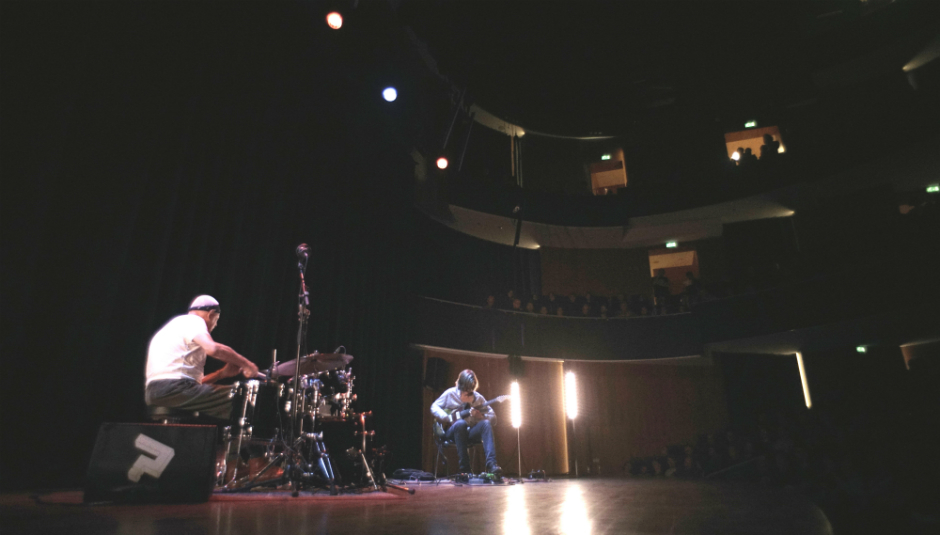 A hush falls over the packed pews inside the neo-Romanesque Antoniuskerk as Karima el Fillali and Jamil al Asadi take to the stage. Al Asadi’s fingers start a slow, measured dance over his qanûn), a fiendishly intricate, complicated instrument, building up rhythms and weaving melodies while El Fillali’s voice rings out, strong and pure, a spiritual call that stirs the soul. The duo are performing tarab, a merger between music and emotional transformation that’s best translated as “musical ecstasy”; songs written by the great composers of the Arab world to have an outward and profound effect on those who listen. And as the sounds meander and soar through the grand church, as voice and instrument dance around each other, the feeling grows that we’re in the presence of something unusually precious, a secret communion in celebration of humanity.

It’s a fitting start to Utrecht’s Le Guess Who?, a festival whose entire existence seems, more than ever, dedicated to musical ecstasy in all its forms and giving a platform to the worthy and the wonderful. To this end, a number of concurrent events and concerts such as Le Mini Who? and the Lombok Festival – a one-day satellite event designed to celebrate the diversity of the predominantly Turkish and Moroccan neighbourhood of the same name – sit alongside the main bill. El Fillali and Al Asadi form part of the latter and are the focus for an afternoon press trip, specifically designed to introduce visiting journalists to the richness of the area and the festival’s desire to celebrate artists from all over the globe who push at musical boundaries and sit outside the confines of most genre definitions.

One of the most eclectic and diverse lineups of any festival anywhere is achieved not only by the organisers’ refusal to countenance the idea of tradition headliners – “We try to present more obscure genres in the same way as you would present more popular artists…no one is a headliner as we are not the ones to judge which artists are more popular,” founder Bob van Heur told us back in 2015 – but by inviting some of the performers to actually curate parts of the schedule. Last year saw four artists curate one night each; this time, seven do the selecting – James Holden, Shabazz Palaces, Grouper, Han Bennick, Jerusalem In My Heart, Basilica Soundscape, and Perfume Genius – their choices spread over four days and 18 venues dotted around the quaint medieval town centre. 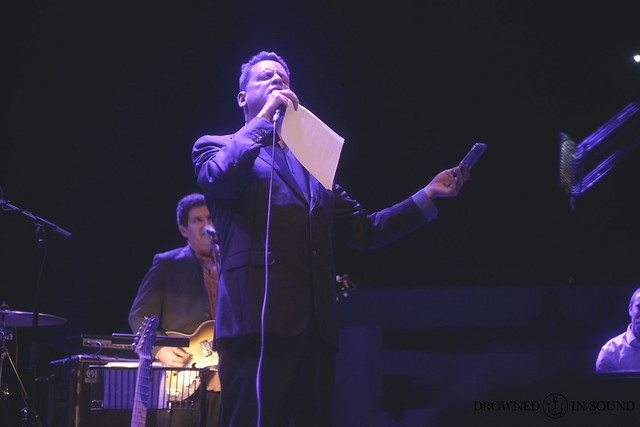 Most of the action is centered around TivoliVredenburg, a huge contemporary music complex located next to the train station. There are six rooms, ranging from the 2000 capacity Ronda to the tiny Cloud Nine, with space for just 175 people, along with numerous bars, merch stalls, a photography exhibition, and a food court. It’s an impressive setting not just for its size and scale, but how easy it is to get around; there are very few queues or bottlenecks, and it feels far more intimate than it should. That sense of closeness is carried over to many of the performances, artists drawing the crowd in and shrinking the space, even in the biggest venues. Sun Kil Moon draws a hushed reverence on Thursday night in the spacious, seated Grote Zaal during a typically rambling, languid set. “How long have we got left, 25 minutes? Only time for two more then,” he says before ‘The Possum’ and ‘Dogs’, the latter featuring Steve Shelley on drums. His hour-and-a-half yields only nine songs, but we do get ‘Butch Lullaby’, performed live for the very first time, along with a couple of covers featuring a revolving cast of friends and collaborators.

Two nights later Kevin Morby turns the same room into a dusty, dusky sanctuary, his warm melodies reflected in the red light that frequently bathes the stage. The airy charm of ‘Dorothy’ and ‘Crybaby’ sound loose and carefree, but it’s when he slows things down to a crawl that he really shines; ‘City Music’ and ‘Cut Me Down’ are magnificent, as is a spectral ‘Destroyer’. Typically, #AllTheFeelz plaudits are usually reserved for those who’re shaping particularly desolate source material or pare their music right down, but Morby manages it while leading a full band through neat, nuanced interplay.

Of course, Le Guess Who? has a few acts that fall into the former category as well, and has the perfect venue for them; the sparse, austere Jacobikerk. Cate Le Bon mesmerizes with a piano-only set on the Saturday that’s more playful than you would imagine, but it’s Mount Eerie who brings the full, emotional weight of the surroundings to bear. ‘Seaweed’ comes early in his set, opening with the crushing: “Our daughter is one-and-a-half / You have been dead eleven days”. It reduces many to floods of tears, the rest following soon after. It’s uncomfortable in the extreme to watch Phil Elverum reveal such heartache for entertainment, as if his grief is too raw for public consumption; even he looks overcome at one stage. He’s given an extended standing ovation that seems to celebrate his strength at getting through the hour as much as the beauty of his music, and it’s hard to imagine a more profound set in such a setting; it is close to perfection, the symbolism weighing heavy in the air as we trudge back out into the cold. 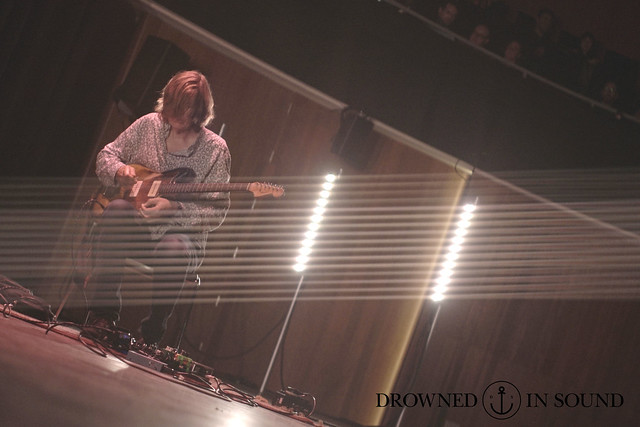 When people think of festivals, they usually think of celebration and beery revellery, but this is also where Le Guess Who? excels. Jazz icon Pharoah Sanders is given a prime Saturday night slot in Grote Zaal, and while there’s nothing particularly tragic about his music, it’s poignant to watch him slowly shuffle between the microphone and the seat set aside for him a few metres behind the rest of his band. It’s a similar story on Sunday with Linton Kwesi Johnson, the dub poet who delivers a timely spoken word performance touching on oppression, inequality, racism and police brutality. He intersperses his work with anecdotes from his time as a firebrand orator, and listening to his words – some of them written in the late 70s and early 80s – it’s striking how relevant they still sound; Sonny’s Lettah for example, or Di Great Insohreckshan could well have been penned about contemporary events. Even more impressive is the rapt attention the great man receives, everyone listening with a solemn concentration.

Every year there are one or two “exclusives”, artists or sets that you simply won’t see, or can’t hear, anywhere else. Two years ago it was Turkish folk legend Selda, while last year they gave us Brazilian Samba empress Elza Soares. 2017 sees three unique events; “The Ecstatic Music of Alice Coltrane Turiyasangitananda Performed by the Sai Anantam Ashram Singers”, Alanis Obomsawin performing Bush Lady in its entirety, and a rare European performance by reclusive Canadian auteur Mary Margaret O’Hara. All three performances grace the last night and are possessed of a stately poise, particularly O’Hara’s feverish, haunted songs. Queues (rightly) form for each, people straining at the door to catch a glimpse – and hear a snippet – of the magic unfolding within.

Such musical eclecticism is not for everyone, however, and Le Guess Who? walks the line between the accessible and the avant-garde better than most. There’s no indie big hitter this year, but there’s plenty for the more casual music fan to enjoy. The skewered pop of John Maus, the delicate folk of Weyes Blood, and Tune-Yard’s kaleidoscopic approach to indie-pop all charm and delight, while Liars deliver a typically brash, pulverizing set in De Helling. Detroit rockers Protomartyr are given the Ronda to showcase their dense, gnashing songs and the band respond with one of the best sets of the festival. Stood stock still centre stage in an ill-fitting suit, singer Joe Casey looks like an angry used car salesman spitting unpalatable truths, his lyrical dexterity a counterpoint to his deep scowl and the rhythmic racket served by his bandmates. 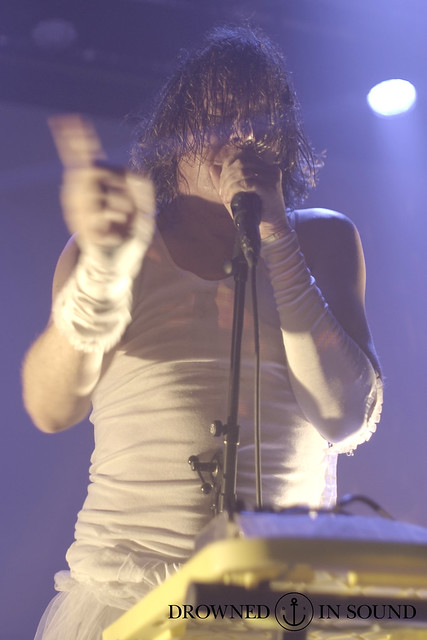 Those who prefer heaviness in the music itself, as opposed to the lyrical content, are also well served. Pissed Jeans’ angry sludge-punk is as coiled and potent as ever, the band serving up aggression and edge in short, sharp blasts. Moon Duo go the opposite way, letting their psychedelic jams unfurl and grow, building in intensity; at times it sounds like they’re trying to tear a hole in the sonic cosmos. And what both bands do with guitars, Ben Frost does with electronics; his furious, brutalizing sounds feel oppressive, some tracks breaking down into a howling, seething mess. His set is accompanied by stunning, disorientating live visuals from Marcel Webber, heightening the sense of being immersed in some futuristic dystopia; “Tripping balls” tweeted synth producer Colin Benders, an apt description for the full-on aural assault.

Unusually for such a large festival, four of the weekend’s slots are marked with a simple “?”, the idea being to introduce an element of surprise and intrigue. Rumours swirl as to who they might be; Destroyer is one name that crops up, St. Vincent another. Even the press is kept in the dark, the identity of the four a closely guarded secret. The downside to this is choosing to forgo one of the slots only to be told later that it was a Gruff Rhys acoustic show in a church. Suitably chastened, we make sure to catch the others; Princess Nokia runs through a darker, more sombre set than usual late on Sunday while none other than The Residents tear up the Ronda on the Saturday.

While there’s no doubting their musicianship, their show is somewhat conceptual; one might even go so far as saying there’s not much for the casual fan. A curious thing happens; a few songs in, the room appears dangerously full, a flurry of texts and tweets drawing people to see a legendary band. A few songs later, however, and the room seems half full, people drifting off with a bemused look on their faces. At times, the band seem to be willfully obtuse, almost daring people to make it through their hour-long set.

But then this is Le Guess Who? where the pushing of boundaries is to be savoured and celebrated. As they continue down their chosen path, the festival continues to carve out its own niche in a crowded marketplace – an event that celebrates music in all its forms, giving a platform based solely on merit and trusting their audience to use their brains as much as their ears. Where else would you get The Residents rubbing shoulders with pipa and guzheng music expert Liu Fang, or Dutch jazz legend Han Bennink staging a forty-five-minute improvisational masterclass with noise rocker Thurston Moore? We’re lucky to have such an event, and can only hope that change is not something on their agenda.

Le Guess Who? 2018 will take place in Utecht, the Netherlands, from the 8-11 November. For more information about the festival, including early bird tickets and passes, please visit their official website.