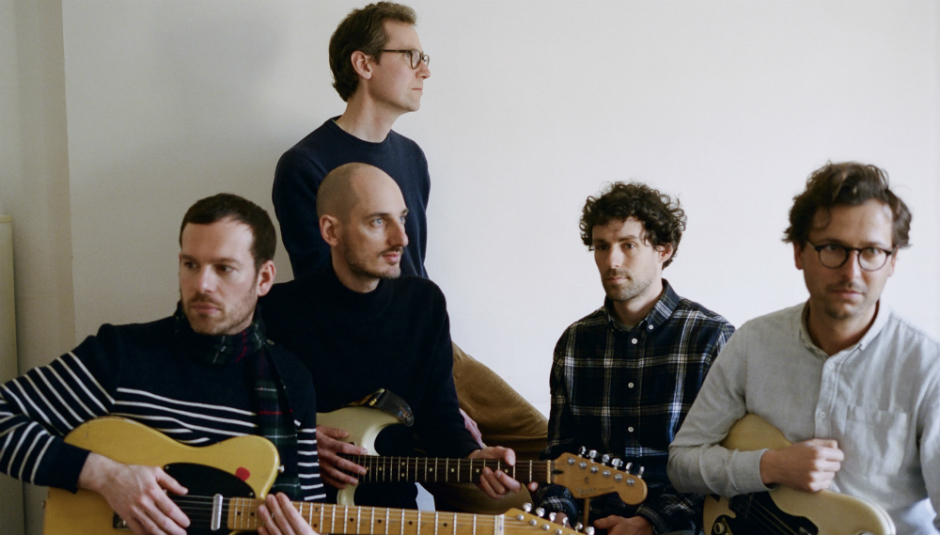 Amsterdam-based outfit Naive Set are the type of band who thrive on the concept of "winging it". Comprised of a bunch of thirty-something nice guys, they are refreshingly over themselves. QED: near the end of the video for ‘So Far So Gone’ (the first in which they appear themselves), we find frontman Mikey Casalaina and guitarist Matthias Kreutzer looking nonplussed as the camera fumbles and realigns in and out of focus. Some bands would rather leave scratch takes like that on the cutting room floor. But Naive Set are far too grounded and content for that sort of pretense, especially whilst penning zingers like this: "First comes the verse / Before the chorus comes / That is, if it ever comes / I guess if it never comes / There always will be another song".

With a quietly impressive output of three albums in four years, the five-piece, led by the American-born Casalaina, churn out brilliant tune after brilliant tune, unburdened by the prospect of success or validation. There’s always a homespun quality to their woozy and harmonic jangle pop songs, looking at bands like The Modern Lovers, Silver Jews, The Beatles, and The Wrens as notable touchstones.

Casalaina, a New Jersey native who settled in Philly after graduating from Rutgers University, actually took two guitar lessons from The Wrens-guitarist Charles Bissell when he still lived in the US. “It’s been fourteen years since their last record, and the one before that was like seven years,” he weighs in. “But now those dudes are in their mid to late forties and I already was a young fanboy back then. The idea of having a job, a family and a band, those guys made it cool already. So it doesn’t feel so weird for me to find myself in that same situation.”. He didn’t exactly get the cliché student/teacher pass-the-torch exchange though: despite being awestruck, during the second lesson, he failed to execute all the scales Bissell told him to learn. It ended as awkwardly as it began.

Nevertheless, haphazardness has its own set of virtues. Naive Set appear to be very much ‘in’ on their own joke. Tunes like ‘One Two Three Eight’ and ‘Like That’ masquerade the rollicking swagger of The Velvet Underground and Orange Juice, only to be underpinned by Casalaina’s wry and self-deprecating wit. ‘Dieter Rams’s Wife’ – featuring the hilariously deadpan vocals of German-born Kreutzer – is a swooning track about having a crush on the wife of a famous industrialist (whose work allegedly inspired a lot of Apple designs).

Naive Set’s 2014 debut Reclining Nude – released on Groningen’s Subroutine Records – establish their offbeat charm in elemental fashion. ‘Carpet’ and ‘Hover Hands’ sound like a band just happy to be here, giddy to get out and play. Just a year later, Naive Set unleashed sophomore LP Dragon. Instead of hiring a studio and engineer, the group opted to write and record the songs themselves in a rural farmhouse. Having an abundance of time naturally imbued a softer, more Arcadian vibe to the band’s overall sound. It also opened up Casalaina’s wordplay to more reflective, melancholy territories. The gorgeous existential balladry of ‘Rabbits’ and the wistful West Coast sheen of ‘Up Beach’ reinforce an innate sense of levity and sincerity to Naive Set. Casalaina: “We don’t want to make an album with empty bullshit, but we also don’t want to announce our magnum opus, pretend to have it all figured out and everything, like, ‘This is what happens after you die’.”

With a goofy grin eternally plastered on his slim, hollow-cheeked face, Casalaina is an affable presence. In an Amsterdam café, just around the corner of DIY-venue Nieuwe Anita (where bandmate Arie van Vliet is set to play with his own band Lewsberg), he is joined by drummer Jan-Pieter Van Weel. In his own way, Van Weel is emblematic to Naive Set’s freewheeling ways: he couldn’t even play drums when he was asked to join the band, instead adopting his own wacky refinement of the Maureen Tucker-doctrine. Instead of merely standing, though, he hops on an imaginary treadmill to his own rudimentary – but deceptively intricate – pulse.

Give or take, Naive Set’s more low-key approach to live shows doesn’t exactly conform to the notions of sound and showmanship Dutch audiences generally value. Casalaina: “It’s weird, there’s an element of me that I can’t do on stage, this showman-persona. But for some reason, it never worked with music. When I play music it always feels fake and pretentious. I could be a game show host if I wanted to. But if I want to be a live musician, it’s a bit tacky to try and be ironic and cool.”

He tells stories of how he used to do his fair share of clowning around back in high school and college. “One of my teachers played Constantine the Great on the weekends,” he recalls. “He started a club and a couple of my friends joined in. I was always the comedy guy, doing the sleight of hand stuff, I wasn’t really good at the actual magic. I juggled, I performed card tricks. It was more like anti-comedy, with this whole build-up, only to put a secret mental thing on full display; ‘disappearing tricks’ with vacuum cleaners deliberately sticking behind the curtain. But still taking a bow in the end.”

With Casalaina’s own reservations in mind to apply that “showman” side of him on stage, in a way, Naive Set’s music finds grace in defeatism (“I curate my own misadventures”, Casalaina sings on ‘DNA’). This mentality prompted them to gravitate towards like-minded bands, playing shows in the past with Eerie Wanda, Nap Eyes, and the now defunct Ultimate Painting. Though recorded in swift fashion, the new album deviates from the band’s tendency to keep songs below a neat three-minute mark. Thanks to the opaque nature of the eight-track recordings, there’s a spectral quality to the overall sound. Van Weel: “We went in with the idea of recording just a handful of tracks. But in-between recording those, more material gradually manifested out of improvisation.”

Casalaina adds: “We had the nuggets of four songs, and but then with ‘Don’t Sip Your Tea At Me’ we really had a jam on our hands. That’s a good feeling, when you immediately write, record and capture a song that’s still so fresh in your mind. I remember waking up two or three in the morning, going to the bathroom to work on the lyrics, before recording it the next morning. That’s really nice about that kind of process. Your time is limited, you can’t get into this endless toil of questioning and overdubbing things.” One of the few things overdubbed are Casalaina’s vocals, in pure John Lennon fashion: “It beefs up the sound and cuts some of the clarity.”

Depicting a candid glimpse into the humdrum motions of life – between the silly goofs, painstaking conundrums and deeper revelations –, it only made more sense to put Naive Set in a recording situation where they basically had to hit the ground running. Even in moments when Casalaina reflects back in a song, things always appear to move forward. On ‘Green & Blue’, he briefly looks through the eyes of his infant child, a young life still in awe by “strange proportions” of a familiar space. "Born with no mistakes / No misfortunes", and then reassuring himself, "When the waves break through / I recede into you / In your sea of simplified life".

Naive Set is out now via Subroutine Records. For more information about Naive Set, please visit their official website.

A Heavenly Weekend In Hebden Bridge 2...