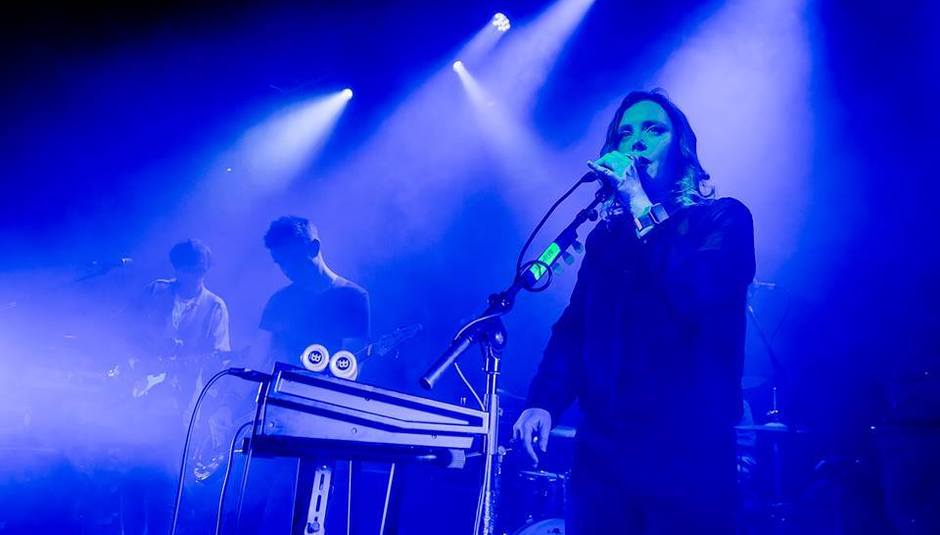 As 2017 draws to a close, it's time to reflect on what's been another great year in the shoegaze and psychedelic world. While a lot of focus was placed on the Mary Chain's, Slowdive's and Ride's respective comeback albums not to mention the return of The Black Angels, the underground has thrown up dozens of gems this year as well. While we're not going to list them all here - you'll have to read the column for that - it would be fair to say the scene is still as vibrant as ever. And with new music emerging from The Brian Jonestown Massacre in recent weeks and albums muted next year from Pinkshinyultrablast and My Bloody Valentine among others, who's to say 2018 won't be an even better one.

Anyway, so long until next year. Here are 30 of our favourites from the past twelve months.

Stockholm's Dead Vibrations have been kicking up a storm for the past couple of years since 2015's excellent debut EP Reflections and now they've just gone and announced the release of their first self-titled long player. Out on 26th January through Fuzz Club Records, here's the lead single 'Drain'.

One of this year's most satisfying comebacks saw the return of Nottingham's Amusement Parks On Fire. Having wowed audiences up and down the land last month in support of recent single 'Our Goal To Realise' they've assured us at Some Velvet Mixtape there's more to come next year with a new album in the pipeline.

Cardiff four-piece Wylderness are a new name to us, but if first single '72 And Sunny' is anything to go by they're definitely ones to watch out for in the future. Their as-yet-untitled debut album - produced by former Test Icicle Rory Attwell - is due for release in the early part of 2018 and looks set to be one of year's finest.

Active on and off for the best part of three decades, Secret Shine returned this year with their most accomplished collection of songs in years with There Is Only Now. Released on Saint Marie Records, it's a breathtaking return to form that suggests they're far from being a spent force just yet.

This Boston duo play noisy post-punk with an early 90s feel that makes us yearn for bands like Smashing Orange and the Drop Nineteens. Their album Smell Smoke comes out in February and if lead single 'Acetone' is anything to go by, it should be a good one.

When The Sun Hits

Nottingham's finest shoegaze supergroup of sorts have been honing their sounds for a while now. This year finally saw them put out their first EP Immersed Within Your Eyes, and as lead track 'The Last Light' demonstrates, is every bit as incredible as one would expect from a band featuring past and present members of Six By Seven, Model Morning, and Spotlight Kid respectively.

We've been fans of Venice four-piece New Candys for a while now and they've just put out their third and arguably best LP to date Bleeding Magenta. Mixing brooding psychedelia with post-punk stylings, the record captures the full intensity of their live show with devastating results.

Italy's other favourite sons. If 2015's debut Neither Virtue Nor Anger set the standard for things to come, this year's follow-up Grace raised the bar even higher. Taking inspiration from the likes of Skywave and the Sisters Of Mercy, it represents another exceptional addition to Tiziano Veronese and Marco Barzetti's increasingly distinguished catalogue.

Noiserock duo Routine Death originate from Gothenburg and Texas respectively having initially got together at the tail end of 2015. Comparisons to Japandroids, No Age, and A Place To Bury Strangers aren't wide of the mark which is fine by us. Here's current single 'Life Inside A Vacuum' off forthcoming debut LP Parallel Universes which is scheduled for release next spring.

Harriette Pilbeam comes from Brisbane and records under the name Hatchie. While it's still early doors in her recording career first single 'Sure' is a mighty fine launchpad that reminds us of Lush or School Of Seven Bells at their finest.

Tombstones In Their Eyes

LA four-piece Tombstones In Their Eyes have put out a couple of great releases this year, most recently in the shape of 'Shutting Down/Take Me Home', a double A-side seven inch on Send Me Your Head Records. Prior to that, August's release Fear was one of the collections of the summer and here's 'Always There' taken from the aforementioned EP.

Toronto's Beliefs have just finished a short tour of the UK in support of third long player Habitat, which came out earlier this year. Loud and abrasive yet exquisitely dreamy in places. It's a fine body of work that deserves to be heard with the volume turned up as high as it can go.

It's been a prolific year for Stephen Lawrie having released two albums in 2017. The second of those Stone Tape came out last month on Italian label Yard Press and is a much more stripped back affair than its predecessor As Light Return. Here's 'The Desert In Your Heart', the lead single from the album.

Innsbruck duo Molly wowed UK festival-goers at The Great Escape and Focus Wales earlier this summer. Their glacial dream rock has drawn comparisons with bands like Jeniferever and Sigur Ros and live favourite 'Glimpse', the title track from their new EP is one of the most breathtakingly epic pieces of music we've heard all year.

Misty Coast is the side project of The Megaphonic Thrift's Linn Frøkedal and Richard Myklebust and their self-titled debut is another of this year's finest long players.

It's been a good year for Sicilian outfit Clustersun. Long awaited second album Surfacing To Breathe finally emerged this summer to a wave of critical acclaim after 2014's promising debut Out Of Your Ego. Here's 'Lonely Moon', the second single to be taken from the album.

London four-piece Honey Lung remind us of that time when grunge first crossed over with the dreamier side of psychedelia. Recent single 'Stuttering Mind' carries echoes of Midway Still and The Edsel Auctioneer, making it one of 2018's finest pieces of reverb-laden slacker pop.

Toronto based four-piece Iris returned this year with a new line-up having initially broke up in 2015. Founder member Scott Downes claims the current incarnation is better than they ever were and if their recent self-titled comeback EP is anything to go by, we'll find it difficult to argue.

Melbourne trio Lowtide have never been ones to rush into anything until it's near damn perfect. Take their self-titled debut for example, released in 2014 five years after the band's formation. It provided an eminent launchpad for their wares and in August the long-awaited first single ('Alibi') off its forthcoming follow-up emerged.

Fazerdaze is the solo project of Amelia Murray and this year saw the release of her critically acclaimed debut Morningside for Flying Nun Records. While it's difficult to pick a standout moment from an album that's been on the stereo pretty much the entire year, we're gonna go for 'Lucky Girl', the lead single released off the record earlier this year.

South Korean four-piece Say Sue Me have been creating exquisite slabs of reverb-drenched wooziness since forming in 2012. Based in Busan, they've found themselves compared to The Raveonettes and The Jesus & Mary Chain among others, which is just as well because current single 'Good For Some Reason' - one side of a split seven inch with Japanese outfit Otoboke Beaver - is one of the finest pieces of sweet and sour noise pop not to bare either Reid brother's name on it.

Originally from Australia but now based in London. Tempesst are the brainchild of brothers Toma and Andy Banjanin. Having since extended the line-up to a five-piece, their new EP Adult Wonderland provides a welcome diversion from the usual sonic assault reserved for this column. Instead, this takes a dreamier, folkier journey down a similar path to The Flaming Lips or MGMT. Check out 'Feel Better' from the EP.

Anyone that's seen Fever Dream recently will know that they've grown into a ferocious live act. What's more, they've also put out one of 2017's most incisive collections in the shape of Squid, the follow-up to 2015's debut Moyamoya.

Athens four-piece Acid Baby Jesus have been a regular name on the psych-rock circuit for almost a decade having formed in 2009. Signed to Fuzz Club Records, they've since put out three albums - the most recent of which Lilac Days came out in September.

Christian Eldefors is Nonn, and his self-titled long player was one of this year's most impressive debuts. Based in Stockholm, the record fuses post-punk structures which an array of sounds and ideas garnered from what appears to be an extensive musical palette.

Sound And Fury hail from Chengdu in China and 'Honey Knows' is the first single to be taken from their debut LP Sprout, which came out last month.

Brooklyn five-piece Gingerlys put out their debut LP Jumprope last year and with a new bunch of songs all ready to go, released the self-titled follow up last month. This is 'Turtledoves', the alluring lead single off the album.

It's been a relatively quiet year for Doncaster's 93MillionMilesFromThe Sun. By their standards at any rate. They recently played their first gig of 2017 last month yet still managed to put out another impressive collection of songs in the shape of _Victory Is Ours, a four-track EP released in September that captures the band at their most effervescent.

It's been a fantastic 2017 for Slowdive. Having put out Some Velvet Mixtape's album of the year in the process it wouldn't seem right to not include one of the choice cuts off their self-titled fourth record so here's 'Don't Know Why' in all its euphoric glory.

Californian songwriter Manuel Joseph Walker has been releasing music as Foliage since 2014. Debut album Truths came out the following year while Silence, his most recent collection of songs emerged in July. This is 'Dare', the first single taken from the record.