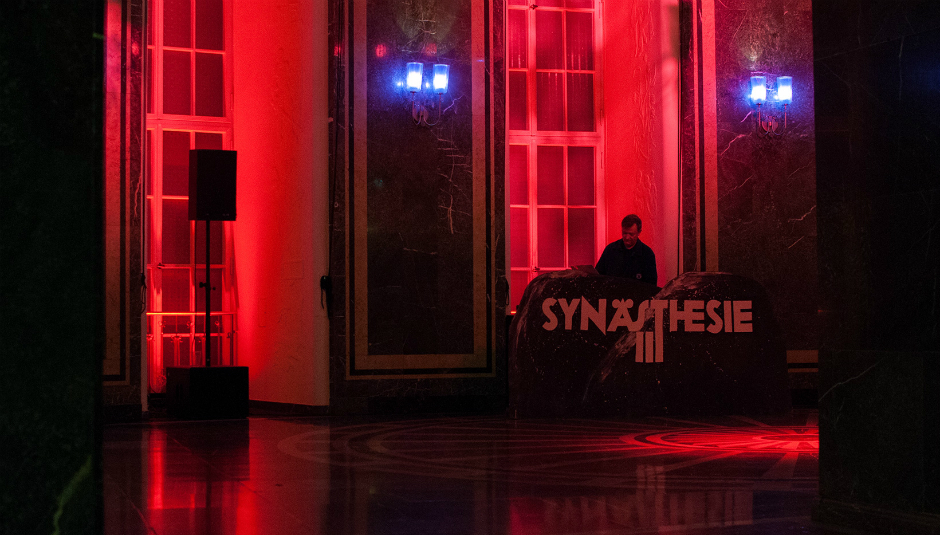 Festival names are often arbitrarily arrived at; a mere nominal glue to hold the whole enterprise together. Others perfectly conjure the very DNA of what they strive to achieve. Held in conjunction with the city's underground institution par excellence, 8MM Bar, Berlin’s Synästhesie falls comfortably into the latter camp. Distilling the everyday fantasia of the neurological condition in question – that is, blurring the lines between one’s senses – it proves a real triumph via a carefully-curated bill of some of the finest cosmically-inclined acts around.

But first a little celebratory soiree. The briskest of strolls from the main venue the following evening, 8MM on Schönhauser Allee is the very definition of a happening little haven on Saturday night. Overflowing with heads from all over, the much-loved dive bar is playing host to two acts – Berlin’s very own dark alternative country five-piece Gunman & the Holy Ghost and New Zealand trio Aporia – featured on its new compilation celebrating 15 years of doubling up as a label. Where the former band sets the tone, masterfully blending lap steel doom with a heart-stung desert twang on the likes of the ‘Jesus Why Can’t I Walk With You’, Aporia ups the ante via their beat-driven tropical meditations and floaty ex-pat tales. Throw in some supreme visuals, a wax marathon from DJ Snøffeltøffs and the smiling eyes of strangers and 6am creeps up all too quickly.

All things considered, it’s a godsend that the main event kicks off the following day from 7pm; just enough time for a quick shower, a Club Mate and the chance to check in with new faces and old friends alike. But no matter in which company you first catch glimpse of it, the almost intimidating stature of Volksbühne draws a muted sea of wows before gracing the Instagram feeds of many of tonight’s attendees. Inside, a vast, adorned hallway and snaking marble stairwells roll out like a bygone interior vista; passing Joe Dilworth and Brian Jonestown Massacre’s Anton Newcombe spinning cosmic gems in the Sternfoyer on the first floor, it becomes clear that while many festival promoters can only dream of availing of such an imposing playground for their event, Synästhesie is an experience that likely warrants it tenfold. Time will tell.

With the fuzzed-out garage-punk of fellow Berliners Balagan laying claim to the crimson hideaway that is the Roter Salon upstairs, Krautrock collective Camera are nothing short of a revelation in tonight’s main, seated theatre venue, the Grobe Haus. Having switched slots with Tangerine Dream at the eleventh hour, the band’s forward-moving, masterfully improvisational strain of Krautrock unravels via a slow mushroom cloud of Michael Drummer’s Motorik pulse, warped sitar textures, sax, and more. Better still, initially soundtracking slow-motion scenes of L.A. congestion at dusk, the music segues perfectly with live footage of tonight’s crowd, featuring slowly-panned close-ups of anonymous hands and static bodies. Whether or not it’s a trick of the mind, witnessing this instant stream of small, intimate moments soundtracked in such a manner makes for an at times profoundly absorbing trip. You could have your pick of any act, past or present, but few would capture the essence of Synästhesie as impressively as this expanded ode to ‘Hallogallo’ does tonight.

Such is the snaking magnitude of Volksbühne that quickly locating the Roter Salon proves a little tricky afterwards. Then again, that is part and parcel of the charm of getting sidetracked in such a venue. Once located, just past overflowing red robes and a few dancing bodies, Istanbul-based band Jakuzi’s Turkish-language, Future Islands-evoking brand of synth-pop (featuring quite possibly the only half-time in Synästhesie history) makes for a brief but enjoyable flipside to tonight’s more psychedelic-leaning arcs of sound & vision.

But time is precious, and back over in the Grobe Haus, the current guise of one of the most iconic names in German contemporary music – Tangerine Dream – are taking to the stage. Fifty years on from forming in West Berlin by the late, great Edgar Froese, multi-instrumentalist Thorsten Quaeschning, violinist Hoshiko Yamane and electronic wizard Ulrich Schnauss mine an hour of minimalist ambient Kosmiche that, bar a few ephemeral flickers of brilliance, feels a little at odds with the power and panache that once made the outfit such a ground-breaking proposition with Froese at the helm. Still, as the piercing applause at the finish-up very comfortably attests to, tonight’s crowd aren’t fussed on the particulars: for them, it seems that Quaeschning, Yamane and Schnauss merit the honour of continuing the good name Tangerine Dream.

Back at the Roter Salon, via the sound of 13th Floor Elevators at the Sternfoyer, fast-rising Manchester five-piece PINS take to the stage and immediately apologize for keeping the heaving room waiting. They’re a mere five minutes late, but such a remark sums up the Faith Vern–fronted band’s ever-growing momentum right now. Blasting through the likes of opener 'Trouble' and the swaggering electro-punk of 'Bad Thing', it’s a convincing blitz from the band, confirming their arrival as an act who continue to forge great things via baleful post-punk, girl-gang hooks and a slick, earworming sensibility.

But it’s nearing the end and some compromises must be made: with The Horrors billed as this year’s headliners, the Grobe Haus is the place to be. Emerging via a salvo of strobe lights and the insistent, Numan-esque surge of 'Hologram', Faris Badwan and co. deliver a triumphant set that reveals that The Horrors’ recent renaissance via V fully translates to a live setting. Indeed, hands down one of the finest bands in the world capable of filtering the vast beam of influence through the prism of their own vision, highlights including the CAN-conjuring Kraut bombast of ‘Sea Within A Sea’, the burrowing pop of ‘Press Enter To Exit’, and Caribou-like closer ‘Something To Remember Me By’ lays bare the sheer multiplicity of the English band’s twelve-year, five-album career to date. Sealing the deal, somewhere between the wonderfully immersive lighting set-up, the huge plumes of dry ice and the Grobe Haus’ widescreen PA system, the fabric of synesthesia – and thus what Synästhesie sets out to deliver – comes into sharp focus. While each of tonight’s acts embodies some element of the overriding aesthetic, The Horrors (just like Camera) outshine themselves.

Nipping back to 8MM for the afterparty, featuring a DJ set from none other than PINS, it’s impossible to resist the idea that Synästhesie III was anything but an outright success. Mirroring 8MM’s pure ideology of loyally supporting rock'n'roll – especially when at odds with more dominant trends in other genres and much bigger venues in the city – it’s a singular festival that proves that being niche is never, ever a bad thing, as long as the right heads are steering the ship.