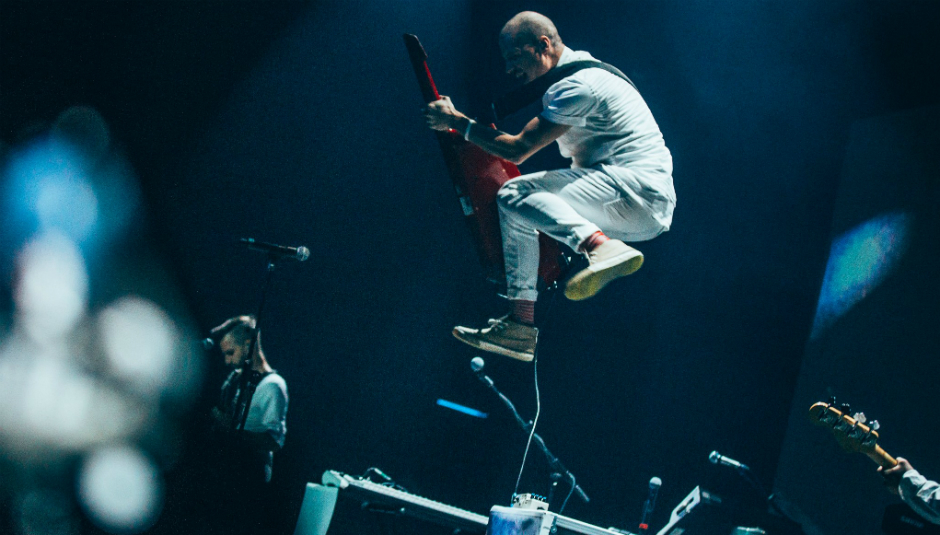 "I'm interested in the area where truth and fiction get blurry": DiS Meets Mutemath

"I'm interested in the area where truth and fiction get blurry": DiS Meets Mutemath

Mutemath might be a name which is unfamiliar to you. You should change that immediately. Stop what you're doing this instant and find the quickest route to listening to – better still, owning – their new album Play Dead, their fifth. Your ears are in for a right treat. What's even better, if you've never heard of the band before clicking on this interview with the band's lead singer and mainstay Paul Meany, is that you're about to find that you've stumbled across one of the most wildly creative and potent bands in the world. Listen through all of their albums. With headphones. Let them sink in and truly take root. This is a band to become enthralled with, not one to merely give a single or two's chance to impress. And then there's their live show, helpfully documented on various live releases over the last decade or more.

2017 has been a year of huge change for Mutemath. Two long-time members, Roy Mitchell-Cardenas and Darren King have moved on, the latter very shortly before a recent tour which took in an exultant debut show for a new lineup and the new material at Islington Academy 2. To mark the show and the release of the new album, DiS sat down with Meany to talk about the new line-up, lyrical inspiration, and their career so far.

DiS: It was great to see you twice in London in the last twelve months, having had to wait nine years since the time before that. If I were being facetious I’d ask what took you so long! How have you found your recent trips to our side of the pond?

Lovely. Sorry about the whole nine-year thing. I've missed you.

The Islington show was spellbinding, all the more since it was the first with the new quartet following recent lineup changes. How have those been to handle?

I couldn't have asked for a better group of guys to craft the new Mutemath show with. I've known all these guys for a while. When I called Jonathan to join, he was working in a kitchen, and Hutch was a paramedic. It's been amazing to take an opportunity to play music with old friends and share this experience with them. We're having a great time.

Your new record, Play Dead, seemed to have a shorter genesis than your previous records. Was that a conscious decision?

Yes, but a lot of these songs were already in the oven. We just had to find ways to finish them. Most of these songs had started during the period we were writing and recording Vitals, but we were separating ideas by categories of minimal and indulgent. We saved the indulgent ideas for later, which would become Play Dead . Both musically and lyrically, it seems to draw together all the shades and themes of Mutemath. It feels to me that if there was one record that truly encapsulates all of this band, it could be this one. Was the songwriting on this record a group effort?

This was the first record we've done as a band that didn't include any outside collaborators. I think for the first time in the 12 years that we've been recording as a band, we finally believed we knew how to best make a Mutemath album and trusted each other through the process.

What do you hope to achieve with the album?

To feel like we finally cracked the code on this strange thing we've been calling Mutemath all these years.

What’s your favourite track on it?

‘Achilies Heel’ seems something of a manifesto song, surprisingly direct and full of the language of spirituality, faith, and doubt. It feels a brave track to include here. Did it feel like a risk?

No. It felt like a necessity. I'm usually most interested lyrically in the area where truth and fiction get blurry. Religion, faith, spirituality; whatever you call it, is kind of built on that. What's substance or placebo and does it even matter? I think because I grew up in such an extreme corner of it, it really embedded itself into my psyche, for better or worse. There's not a Mutemath album that goes by where I can't help but take a shot at it.

‘Stroll On’ and ‘War’, too, seem to be particularly yearning for a better future. Do you feel like you’re becoming lyrically more vulnerable and bolder too as time goes on?

I don't know about that, but I've stopped second-guessing myself as much as I used to.

Looking back on your career, what are some of your favourite moments so far?

When I think back to the beginning to how clueless we were and just did what we knew and it started working, there was some fun memories attached. Just making a crazy ass music video for our first single with our video blog guy on the road and then it works and we're suddenly at the Grammy's was pretty amazing.

As you’ve achieved greater notoriety over the years, have you found it a challenge to maintain the core intimacy and energy of what makes your live show, particularly, so special?

I've realized our show just is what it is. I don't see a difference in those factors.

After every album so far, you’ve released a companion piece, or so it’s seemed, either a live document or a re-imagination album like last year’s Changes. Can we expect another live record from Mutemath anytime soon?

No plans as of now.

From the outside, Mutemath seems as full of life, vitality, and hope as ever. What do you think the future holds for you guys?

I think this year has taught me to stop wasting energy making predictions. I just want to do what I can to enjoy this moment that no one could've ever predicted.

Play Dead is out now via Caroline. For more information about the band, including forthcoming tour dates, please visit their official website.

The Present Stops For The Past To Spe...