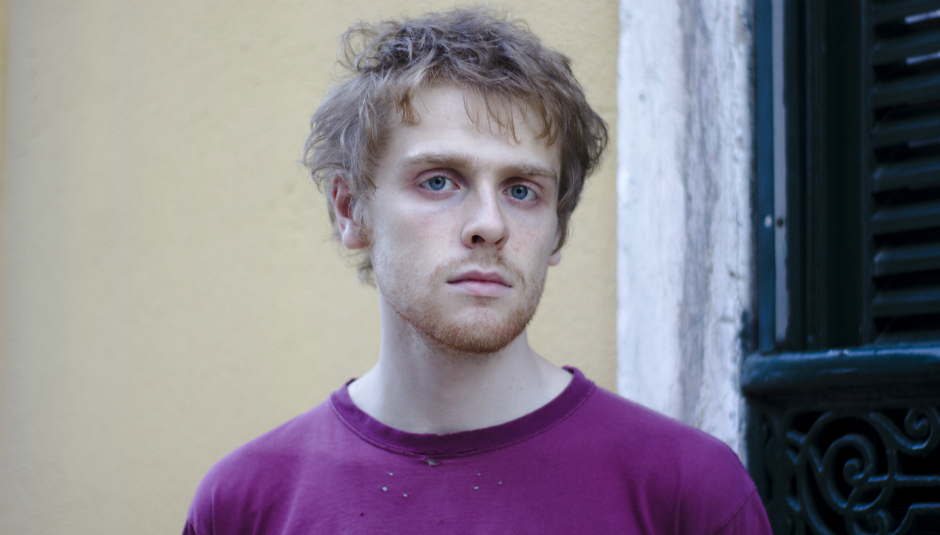 The Present Stops For The Past To Speak: DiS Meets Kiran Leonard

The Present Stops For The Past To Speak: DiS Meets Kiran Leonard

Kiran Leonard is not one to stay still. At the soundcheck for the first of two shows at St. Pancras Old Church tonight, he zooms between the little stage and the green room, alternately belting sections of his songs down the mic, hammering on the church’s venerable upright piano, and hunched over his guitar, fingers skittering over the frets while his accompanying string trio make their final adjustments. Such is his energy tonight that I’m slightly worried I won’t be able to intercept him for an interview, but when we do settle down to talk, he is becalmed, enthusing about the venue, and excited (crucially not over-excited) for tonight’s show – which promises to be remarkable.

It’s a very different setting to where I first met Kiran, on a particularly boisterous night at The Lexington last April, just before a frantic, loud, mind-bogglingly twisty show, during which a full band jolted and skronked through songs from the just-released Grapefruit and debut album Bowler Hat Soup. Those two records announced the arrival of an extraordinarily gifted, restlessly inventive songwriter – one prepared to merrily feed the entire canon of recorded music into a mincer and make uncanny shapes out of the resultant pulp. Here was a young man unfussed by a ‘signature sound’, and determined to look forward at every opportunity.

As in life, so in music. Post-Grapefruit, Leonard quickly recorded Monarchs Of The Crescent Pail, an intimate series of acoustic guitar experiments, whose mournful centerpiece ‘Cracked Globe’ was played on four upright, detuned guitars, arranged to be strummed, harp-like, with both arms. Monarchs receives an exclusive release on cassette tonight, alongside the main event: a new, and again, very different record. In fact, it’s quite unlike anything else you’ll hear this year.

Derevaun Seraun finds Leonard on quieter, more austere terms, but his ideas are as thrillingly eclectic as ever: a 30-minute movement for string trio and piano, the album guides the listener through works by James Joyce, Albert Camus, Henry Miller, Clarice Lispector, and Manuel Bandeira. It’s a significant stylistic shift from Leonard’s first two records (works which favoured a kitchen-sink approach), but he explains that this was partly a necessary concession. “I don’t really consider Derevaun to be in the same lineage as the first two. For this one, I was commissioned to write something a few years ago by Manchester Central Library, which was undergoing some renovation work at the time, to be performed when it reopened. It’s simply about five different authors that I like. The limited instrumentation was necessary, really – it’s designed to be played all the way through in one go. I really liked working that way.” Is Derevaun more of a detour than a side-project, then? “Exactly. The next record will be more in the spirit of Bowler Hat Soup and Grapefruit.”

How did it feel being commissioned to write, rather than waiting for inspiration to strike? “It was really cool – the first time I’ve done something like this, apart from, like, at school. In a way, it wasn’t that limited – I could have written about whatever I liked, really. But it was nice to work within certain restrictions; for example, I had to reduce the number of instruments I wrote it for as there was only a limited budget. The only other specification was ‘writing on the theme of libraries’. Obviously writing about literature was a given, but I also wanted to make it about the accessibility of libraries. One thing I think is really important about libraries is the way they transcend class with regard to literature; one of the things I tried to do with this record was write about the enjoyment of literature in a very instinctive way.”

It certainly feels instinctive. Opening track ‘Could She Still Draw Back?’ gets to the heart of James Joyce’s ‘Eveline’ (from A Portrait Of The Artist As A Young Man) so directly, and with such acute emotional skill, that it seems amazing no-one has used it as the subject of a song before. And indeed, the song achieves what Leonard refers to as Joyce’s “instant accessibility”; the version of Joyce we read first before we are overwhelmed by the mountain of attendant academic flim-flam. “Joyce has this reputation as a writer you really have to work to understand – you know, you need to know about Irish Home Rule and speak fluent Latin, or you’re not worthy. But that’s not true – what makes Joyce really good is his expression of things in an instinctive way. There are bits of Portrait of the Artist that you might not understand – in fact, the phrase ‘derevaun seraun’ is a good example of this. Academically it’s been turned over a lot, but at the end of the day it doesn’t matter: when you hear that phrase, in the context of the senile old woman who says it, it has a phonetic quality which is immediate and despairing.”

I suggest this approach might be considered counter-intuitive for someone currently taking an English Literature degree. “Don’t get me wrong – I do think that [analytical] approach is informative – it gives you a lot of interesting things to think about, but it shouldn’t be the be all and end all… It sounds a bit of a cliché, but I’d rather think about how something made me feel than keep looking for signifiers everywhere.”

And what of the album’s extraordinary, winding lead track, ‘Living With Your Ailments’, inspired by Albert Camus’ philosophical rejection of suicide, The Myth of Sisyphus? “It’s one of the most important books I’ve ever read – it genuinely changed my life. It’s something I’ll return to again and again. I won’t really say much more than that; it’s just fucking amazing.” In fact, his feelings about Sisyphus are made clear in ‘Living With Your Ailments’ lyrics: “I cannot believe my luck, I cannot believe it still / There is a happiness beyond meaning / I don't have to take my life for ontology / I can just be mortal, godless and free”. Again, the attitude of the original piece is summed up in the music: bold; open-hearted; unburdened.

We go on to discuss Clarice Lispector (“her work is an absolute crystallisation of what I’ve been talking about”) and Manuel Bandeira (“very colloquial, very stark, writing poetry for the average person”). But is there a connection between the five writers he chose for the project? “No. It’s a bit paradoxical but the only overarching concept I wanted was the avoidance of an overarching concept! That sounds a bit pretentious… the bottom line is, musicians aren’t often very good at talking about books, and I wanted to do it in a way that wasn’t, like, Instagramming the front cover of The Great Gatsby… to avoid making it too performative, and I really hope it hasn’t come across like that. I wanted to write something very simplistic, that at the same time wasn’t a simple transcription of what happens in the books. It’s more about me just saying why I like these books in as direct a way as I can.”

While Derevaun Seraun could hardly be described as simplistic, it contains more direct, hummable moments than a baroque concept album about experimental literature has any right to. And tonight, in St. Pancras’s cave-like surroundings, they are brought to life. It’s such a gripping sequence that the suite of guitar-led tracks that close out the set almost come as a relief/release – that is, until Leonard unleashes his traditional set-closer, a high-wire demolition of the soul standard ‘Actions Speak Louder Than Words’. It brings the audience to their feet; he gives them a shy wave and bounds offstage.

By the end of our conversation, Kiran’s thoughts have again turned to the future; the next thing. Can he see himself returning to work in this format again? “I don’t think so, really. My new record, Western Culture, which will come out next year, has a bit of that, but the influences are definitely more musical. I’ve been listening to a lot of Captain Beefheart recently – one of the things I really like about Beefheart is that a lot of it is impressionistic and doesn’t always make sense. It’s like poetry for its own sake. I’m really proud of the tracks on Derevaun because I was able to compact a lot of information into them, but at the same time I think that has its limitations.” That may be the case, but the usual limitations somehow don’t seem to apply to Kiran Leonard. For one so preoccupied with looking forward, with this project, he has done an admirable job of letting the past speak for itself.

Derevaun Seraun is out now via Moshi Moshi. For more information about Leonard, please click here.

This Will Be The Last Time: DiS Meets...