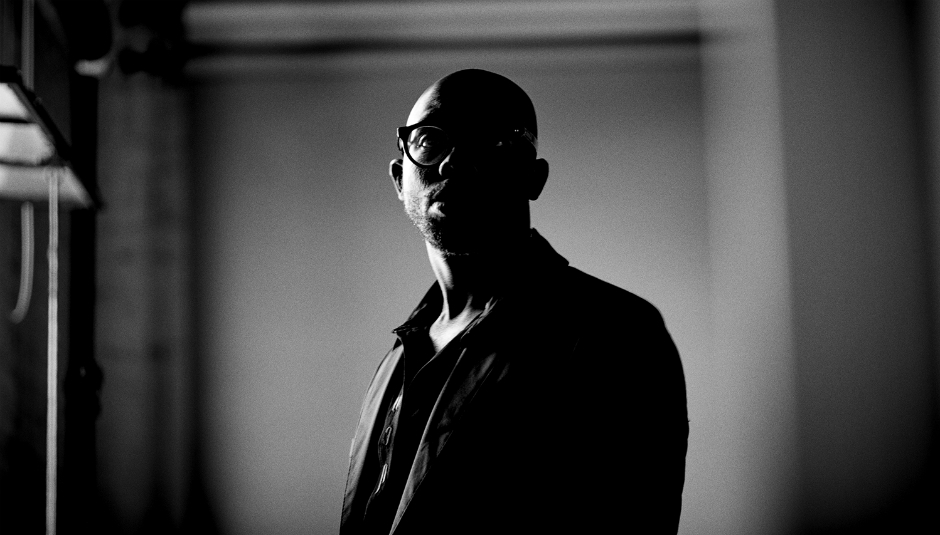 “It’s fascinating, being human and being alive,” Obaro Ejimiwe muses. “There’s so much to say about that and I feel it’s endless in terms of what you can say.” Trying to navigate and make sense of the human condition is something Ejimiwe has been doing in some form under his moniker Ghostpoet ever since his Mercury Prize-nominated debut Peanut Butter Blues & Melancholy Jam in 2011. There, he pondered about drunken nights and the realities of being skint and alone. By his last, third record, Shedding Skin, he was mixing laments over lost love with sensitive looks at homelessness and domestic violence.

But just two short years later, the world seems to have shifted on its axis even more, 2016 alone proving to be a hurricane of political and social chaos. A sense of malaise seems to hang in the air, a feeling that hasn’t passed Ejimiwe by. It’s that ambiguous, amorphous sensation of general unease that’s helped to shape his new album. “It made sense to, as always, just write in a way that captures the times and tries to capture the emotions connected to these times,” he says. Even the title of the record, Dark Days + Canapés, overtly references bleakness while also pointing to better times. At least for some. “For me, a lot of stuff in my life I like to counterbalance,” Ejimiwe explains. “With Dark Days + Canapés, the dark days reflect the dark moments we’re living in, whereas canapés is the opposite, depending on your social standing.”

It’s a phrase that sums up the disparity between the Haves and Have Nots, a little nod to some of the tension that lies within. It’s a strain that’s simply made stronger by continuing down the guitar-driven path Ghostpoet first started travelling down with his last album. “On Shedding Skin I finally thought I’d got to a point where it made sense, and it was working out how to develop that,” Ejimiwe says of this fuller sound. Some of the step forward stemmed from the influence of producer Leo Abrahams - known for his work with Brian Eno, Jon Hopkins and Wild Beasts - who “helped develop the sound that I was aiming for.” Ejimiwe took a slight step back from production (“not too much, a couple of steps back!”) and the landscape of Dark Days + Canapés started taking shape. Ejimiwe describes his vision for each of his albums in distinctive terms: “Every track was to be part of a world, but at the same time it was important that each track had its own thing going on.”

“It’s almost like you’re entering a room and all the pieces of furniture in that room make sense,” he expands. “You can go into any other room in the house and they’ll have a particular air about them. Each album is about creating that room, that sonic world, a body of work that works together as an album. That’s always the ambition.” If Dark Days + Canapés was a room, it may be one where the curtains are drawn, the lights few and dim, perhaps with a television stuck firmly in the endless cycle of rolling news. That’s because it’s a record characterised by blackened refrains of weeping chords and downbeat synths, a tapestry of harsh and soft tones that becomes haunting and all-enveloping. Even in its slightly sparser and most melancholy moments it feels dynamic, emboldened by the likes of the drowned-out sonar sounds on ‘We’re Dominoes’ or the hysterical laughing on ‘Freakshow.’

But what also makes Dark Days + Canapés a different world to Shedding Skin is the comparably few collaborations that pepper the record; at least, ones you can hear in the foreground. Listen hard enough and you might be able to hear the likes of Charlotte Hatherley, but it’s only singer-songwriter EERA and Massive Attack’s Daddy G who are easy to spot. “Maybe my initial feeling would have been to bring them to the foreground, but Leo helped me see it from a different perspective,” Ejimiwe explains.

It’s not only the guests that are placed deeper into the mix, either; Ghostpoet himself often finds his vocals level with the music that surrounds him. On the likes of ‘Trouble + Me,’ where Ejimiwe’s words on the disquiet that modern life can generate are veiled in mysterious, vague terms, pushing the vocals back only heightens the ambiguity. For him, this was a logical step. “It made sense to give both sides prominence and a more even experience,” he says. He wants his music to be relatable, “even if English isn’t your first language,” aiming for a particular feeling, if not the words, to expand beyond borders. “If you can’t get it lyrically I want it to feel it musically in some shape or form,” he explains.

Feeling something, getting some form of response to his work, is something Ejimiwe is passionate about. Wanting to provoke a reaction, no matter how small, seems even more important when the contemporary world can provide so much information at any one time that even the most horrific of events can begin to seem oddly mundane and every day. “You can see a lot of the news and social media and become immune to this stuff,” he says. “Every day now there’s some kind of bomb or terrorist plot foiled and you can just become desensitised to it.” Considering much of the ambiguity that surrounds his work though, Ejimiwe is hardly trying to preach a particular perspective in his work. Instead, it’s more about encouraging independent thought. “It’s not me trying to put across an opinion,” he says, “but I just want to shed a light on a subject we’re all aware of.”

That doesn’t mean there aren’t forthright moments on Dark Days + Canapés though. Indeed, its lead single ‘Immigrant Boogie’ is possibly one of the most direct tracks that Ejimiwe has released. It sees him relating the story of a man attempting to find a better life with his family, told from a first-person perspective. Along the way though, things take a catastrophic turn. The man is cast overboard and, unable to swim, begins to ponder on the potential future fate of his wife and children. Ejimiwe’s words aren’t veiled, weaving a story told with strikingly plain and unadorned words, and that makes it even easier for the listener to place themselves in the immigrant’s shoes.

“I wanted it to be direct because it’s close to my heart, something we’re all aware of,” he explains. “I wanted to put myself in the shoes of someone who was trying to leave an area of conflict to find a better life for themselves.” But ‘Immigrant Boogie’ is also a tale of humanity, its directness just a new way of portraying the type of tale Ejimiwe has been weaving since the first Ghostpoet album. His interest in the topic only grows stronger as time passes too. “I’m getting a bit older, and I’m trying to make sense of what it is to be human and the human condition,” he says. “It’s been something I’ve tried to make sense of, and I’ll continue to do so.”

It’s unsurprising then that other tracks on the album examine different aspects of humanity in intriguing and engaging ways. ‘Karoshi’ explores two different sides of human nature in tandem, mixing the global and the personal into one rhetorical question: “And we’re / Fighting for what?” “Like, what is the point of these wars and conflicts that we seem to be constantly embroiled in as humans?” Ejimiwe ponders, addressing one side of ‘Karoshi.’ “Partly as well, the title comes from the Japanese phenomenon of being worked to death, as a rough translation. It’s questioning that as well,” he says. “These blood and sweat that we shed on a regular basis for jobs, that we don’t particularly want to do. What’s the point? To buy a bigger TV? Or constantly collect things to seek a form of happiness? It’s stuff like this that’s been on my mind.”

Both ‘Karoshi’ and ‘Immigrant Boogie’ hint at the lingering spectre of death in different ways, and that’s unsurprising considering that with life comes the inevitability of eventually dying. And so ‘Live>Leave’ directly addresses mortality, but in a way that’s existential but deeply relatable. “It’s horrible talking about it in terms of ‘doom and gloom’,” Ejimiwe says, chuckling at the dark thought, “but you’re here one minute, you’re gone the next.” It’s strange then that it’s a song that almost didn’t even make it on to the album. “With some songs, the demos had an essence and I like to keep that essence intact in the final version,” Ejimiwe explains, “but with that one, it just wasn’t working at all. We made it work just in the nick of time really!”

It’s only a good thing that ‘Live>Leave’ eventually made it on to the record because it doesn’t simply wallow in the “doom and gloom” that Ejimiwe describes. Instead, it’s a much more nuanced look into mortality, one which encompasses the ideas of transience and acceptance. “I feel talking about it through song doesn’t quite normalise it, but does help relieve the mental pressure,” Ejimiwe says. “I felt like I needed to write this, and then I can move on and just enjoy the moments I have on this earth, the time I have with friends and family, to be as creative and positive as possible.”

Even though his own “mental pressure” has been partially alleviated by the experience of writing a track like ‘Live>Leave’ though, he accepts that grappling with mortality is a deeply individual experience. “For some people, it can be quite destructive and chaotic, where for others it’s about having a deep breath and carrying on with life,” he says. “It’s difficult, depending on your life experiences and what you’re going through, I’m not saying it’s easy, but that’s my philosophy in life.” Still, he laughs at the fact that the accepting nature of ‘Live>Leave’ is a rare ray of light in the dark of the album overall. “It’s one of the few moments of hope! Hey ho, that’s me!”

He might chuckle at the fact that Dark Days + Canapés is often a bleak look into current times, but it’s more than simply doom and gloom. It’s also an album about humanity, about capturing an often amorphous feeling of dread through music and words. Though he often speaks from a first-person perspective, it’s also embedded with a deep sense of empathy for others. “A lot of people are feeling uneasy about the future and what it holds, and they’re not able to articulate that,” Ejimiwe states. Through a combination of direct and ambiguous language, he’s managed to capture that disquiet in a way that’s strangely comforting. Is there one key point that the listener can take away from Dark Days + Canapés? Ejimiwe says it best: “I guess, if anything, feeling like they’re not alone in this general unease.”

Dark Days + Canapés is out now via PIAS. For more information about Ghostpoet, including upcoming tour dates, please visit his official website.