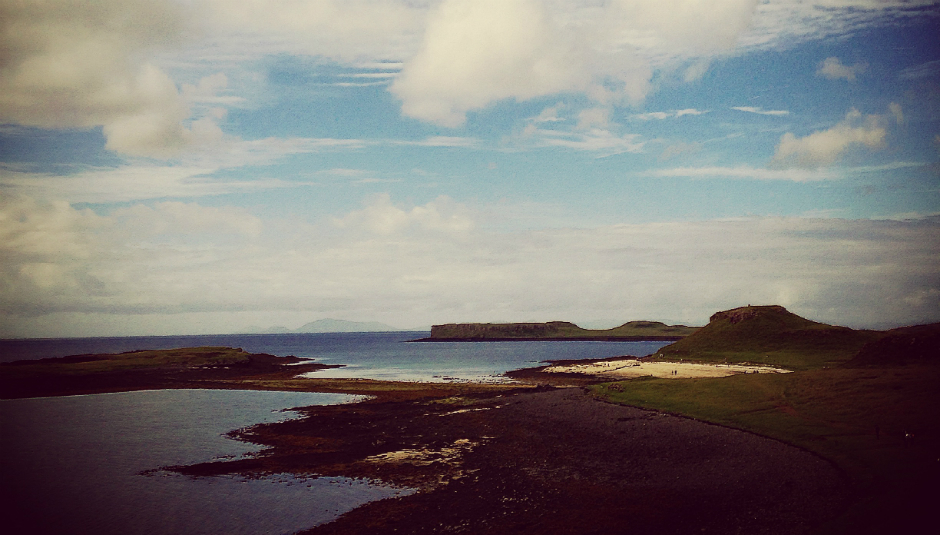 In August 2017, two of the most progressive and highly regarded new Scottish acts will present their unique brand of lyrical landscape pop at SOUNDING at the Edinburgh Fringe.

Sets by Modern Studies and Lomond Campbell will be accompanied by intricate arrangements played by renowned ten-piece string section The Pumpkinseeds, with brass and voices, in what promises to be a spectacle of contemporary indie talent.

SOUNDING will take place over three nights – 20-22 August 2017 – during the Edinburgh Fringe, in the beautiful Stockbridge Church, a Georgian building with stunning acoustics. The show will feature special projections, an exclusive publication and downloads given out free to ticket holders, and a bar run by The Glad Cafe.

We asked Lomond Campbell to give us some background on the project's genesis, and how the Scottish highlands inspired his work.

The narrow-headed ant is specific to Rannoch Moor in the Scottish Highlands. You don't find it anywhere else in the world. Narrow Headed Ant sounds like the title of a lost Captain Beefheart song. I first discovered Beefheart as a teenager when I watched a documentary about him on the BBC. Off-kilter rhythms seemingly at odds with wiry, dueling guitars jostling under his lurid voice, sitting proud in the mix like a mountain inflamed proper…this was a new sound for me. In the documentary he mostly appeared to be hanging about in the desert, which somehow suggested that’s how you got access to the higher enlightenment needed to make such complex pop.

I think that Beefheart documentary was the catalyst for an ongoing fascination with music that somehow makes you visualize the landscape it was created in. All through the years the image of loners creating oddball, outsider music in vast, unpopulated expanses kept returning to me.

I can’t listen to Bruce Haack’s wonky, proto electronica without picturing him tinkering away on hand built electronics in the isolation of the Rocky Mountains. Equally, I can’t listen to the trademark tape-saturated, analogue sound of Twosim by Boards of Canada without imagining them hiding in folds of the Scottish Borders surrounded by banks of old TVs transmitting dystopian imagery on a loop…you know, a bit like the old McEwans lager advert from the 80s. I doubt they had TV banks in their studio but nonetheless, you can almost feel the hum of a hundred sinister cathode ray tubes on those recordings. Skip Spence’s album Oar is soaked with the supernatural fog of Ken Kesey’s book One Flew Over The Cockoo’s Nest. You can virtually smell the corridors of the mental institute in his songs. Music released on the Takoma Record label is another one that conjures up a particular landscape. The landscape invoked by the music of John Fahey, Robbie Basho, Leo Kottke and Max Ochs is the kind you’d see in old Westerns - those sculptural and figurative rock formations of the arid desert badlands. I guess that’s fairly apt as the label was run out of California, which has many such vistas in the Mojave & Colorado deserts. You can imagine these obsessive, reclusive & misunderstood guitar players hiding away from it all in a dusty desert shack.

Back to the home of the narrow-headed ant. The infamous Highland Clearances left the Scottish highlands one of the most sparsely populated places in Europe, so driving through Rannoch Moor (outside of the tourist season) often does feel like you’re driving through a desert, albeit a wet one. I started to assimilate knowledge of the Scottish highlands gradually over the course of many trips, but fairly early on it struck me that this landscape was an ethereal, craggy, outlandish and alien environment somewhat at odds with the commonplace effervescent descriptors used to tempt tourists in. “Breathtaking, jaw-dropping, stunning”…….aye maybe, but it’s also quite sinister in many ways. If you head out to Ardnamurchan lighthouse you could trick yourself into thinking you’re in a scene from an Andrei Tarkovsky movie. Driving through Glen Coe at night is like floating through deep space, and walking amongst the enormous sand dunes at Camusdarach is an equally sci-fi experience. The highlands of Scotland are eerie and, truth be told, I find the whole place a bit disquieting.

A few years ago I got turfed out of my rented Edinburgh flat because the landlord wanted to move in. I had some money for the first time in my life because I’d fallen in with a whisky company who commissioned me to make some music and art for them. In a state of chaos and spooked at the thought of my impending homelessness, I set my sights for the highlands and I panic-bought a wrecked old school. It sounds a bit far-fetched, but it really was a panic-buy. I found this remote, rural school – wrote a half-hearted letter to the local council with a cheeky offer on it and told them I wanted to turn it into a studio rather than knock it down. They accepted & the sale went through rapidly without allowing me much of a chance to reconsider my options. Oh well. All of a sudden I found myself living in a leaky old school with no running water, electricity, or heating and some seriously spooky kid’s paintings on the wall. The place looked like it had been abandoned hastily because of some catastrophic Chernobyl-esque disaster. Cold, wet, dirty, creepy & impractical …. I started to wonder if the local council was just waiting for a chump like me to come along.

Not long after moving in I set up my recording equipment making sure it wasn’t going to get ruined by the leaky roof and began recording. I’d been messing about with some Takoma Records inspired acoustic guitar pieces while I waited for the electricity to be turned on in the school. They had morphed into songs, sparse and eerie like my new Highland environment and the lyrics charted my move north and described the landscape around me. I recorded each song in three takes. I remember having to do three takes as there was a tractor going back and forth outside.

The recordings came out pretty good; weird, lengthy and probably not very commercial but there was something in them so I sent them to cellist Pete Harvey and suggested he try some string arrangements. A few months later he sent me his arrangements and they were both stark & opulent at the same time. They were bonnie but it was a fading, melancholic beauty….a bit greying and autumnal I guess. Perfect. We worked on it some more and eventually recorded Black River Promise in two days in a 500-year-old castle in the highlands, with a 10-piece string ensemble.

Sounding from Made in Scotland on Vimeo.

For the sleeve I used a weird, green tinged photograph of the view from my dilapidated school over the loch. There’s a sawmill behind the trees over there billowing out smoke. For me, it sums up that slightly unnerving feeling brought on by the Highland landscapes that surround me. I hope that same landscape has been imprinted on the music too. It had a low-key release last year on Triassic Tusk Records and it’s due for a worldwide re-release on Heavenly Recordings in November. I’m kind of surprised by that because as I made those initial recordings, with that tractor shuttling back and forth, I didn’t think I was even going to let anyone hear it. From the 20 to the 22 August I’ll be playing the album in its entirety with the full 10-piece string ensemble in Stockbridge Church, Edinburgh. Modern Studies will be playing an ambitious live version of their new album too. I’m going to project videos of the landscapes that surround my decrepit school building. I might even throw some microscopic footage of the narrow-headed ant in there too.

SOUNDING will take place over three nights – 20-22 August 2017 – during the Edinburgh Fringe, in Stockbridge Church. The show will feature special projections, an exclusive publication and downloads given out free to ticket holders, and a bar run by The Glad Cafe. Tickets are on general sale at £12 through the Fringe Box Office..