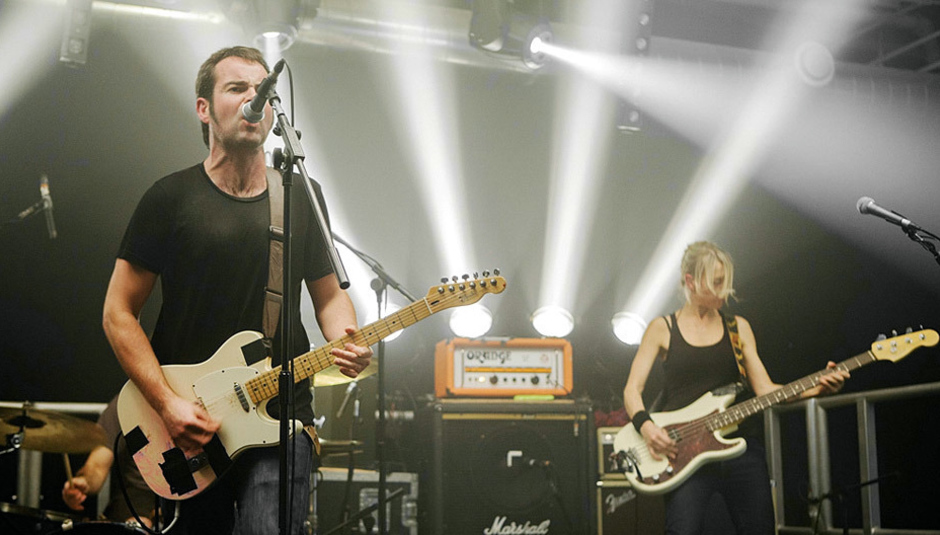 There are literally hundreds of gigs taking place across the UK during Independent Venue Week, and here are just a few that we hope to attend.

There’s Dead! who recently signed to Infectious (who released Muse, Garbage, Alt-J, etc) headlining and The Orcas opening, but it’s our editor’s favourite new discovery of 2016 that we’re most excited to see: False Advertising. These angular, grungy (post-emo?), Mancunians are led by force of nature Jen Hingley who’s not only their lead guitarist and singer but also spends the bulk of the show drumming too. Yes, that’s as thrilling to watch as it sounds.

Yes, it it may be massive but it’s still an independent venue. The Charlatans’ man is this year’s IVW ambassador and he’ll be playing a special show in the Elgar Room with support from Tears and The Pheromoans. Think of it as the Ambassador's reception, if you will.

Not content with throwing a party at one of the countries most prestigous venues, Tim Burgess has also organised a special IVW tour, which you can see rolling into a town near you (hopefully!)

6 Music’s drive-time show will be zooming around the UK all week next week meeting various venue owners, politicians and musicians on his travels. Find out where Steve Lamacq will be and go shake that man by the hand for introducing you to half of your record collection.

We're taking the show on the road for #IVW17, and we're looking for music loving locals to join us. Drop an email to lamacq.6music@bbc.co.uk pic.twitter.com/0peIsJ8yCU

The @BBClamacqshow is hitting the road for #IVW17 – find out which venues @BBC6Music will be visiting this year: https://t.co/oMOIa09vuA pic.twitter.com/YIHV6QBWDS

Lammo isn’t the only music championing BBC radio presenter doing his bit to support Independent Venues, Dr Huw will be hosting a night at The Social in London. This is Huw’s regular night celebrating the very best new music.

You don’t see your favourite radio jockeys out of the studio and three turn up at once. The delightful John Kennedy is putting on a big ol’ alldayer for Independent Venue Week at London’s newest venue (owned by one of Mumford & Sons, fact fans!).

Is the Brudenell the best venue in the UK? A lot of people seem to think so. There’s also a rumour that Girl Band are the best live band in the UK. This seems like a perfect way to celebrate IVW then.

THE BIG MOON AT BRIXTON WINDMILL

Think this one might already be sold out. Look out for the dog on the roof if you’re going.

We are very excited to be returning to the site of our first ever show, the Windmill next week for #IVW17 Tickets on sale TOMORROW 10am. pic.twitter.com/q7NW2k0Wl9

...ALSO AT THE WINDMILL

With support from Juanita Stein from Howling Bells, double-header takes place over two nights (Sat 28th and Sun 29th January) at the now legendary Trades Club, which just might be the best venue in the UK.

Sam Duckworth aka Get Cape. Wear Cape. Fly, is now making music as Recreations, and he’s taking his band on a IVW tour.

Following the 10/10 from DiS last year, it’s fair to say we’re excited about seeing this Dutch lady in a small commuter town, at the somewhat legendary Esquires with an exciting local support.

Go for the cosy live shows. Stay for the drams and delicious vegan food.

St Andrew's Day Venue Spotlight – Glasgow's @thehugandpint have a show for every night of of #IVW17: https://t.co/xbfT1dJ8kC pic.twitter.com/BfP8FlfHmc

This lot do mystic psych-prog rather splendidly.

Flamingods take to our stage on the 26th January for Independent Venue Week!

Check out this epic live... https://t.co/UnQgebdZlZ

No DiS article is complete without mentioning FotL.