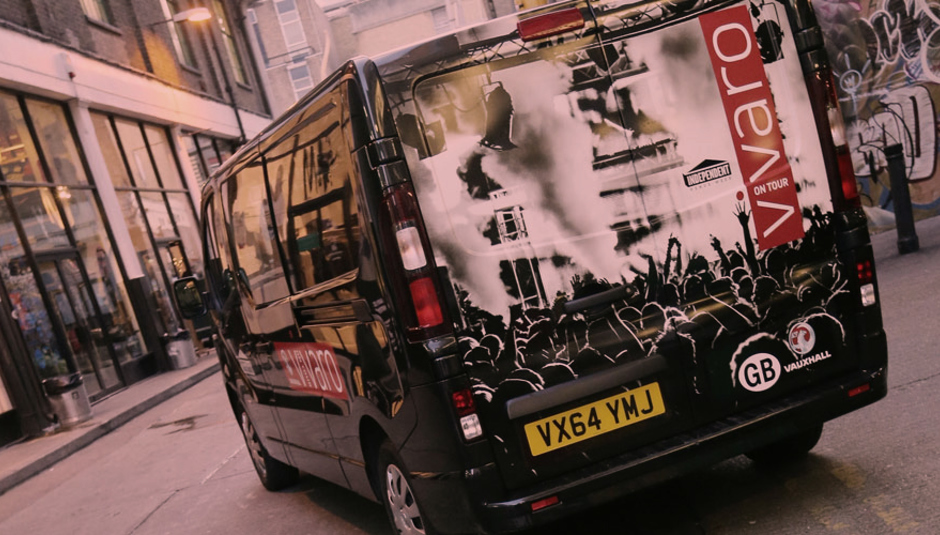 “It’s a cliché that travel broadens the mind… touring bends it!” declares former Elvis Costello And The Attractions bassist Bruce Thomas in his autobiography The Big Wheel. Full of tales of tourbus pettiness and cautionary warnings about the brain-mashing dangers of sitting on the front seat while driving down endless roads, Thomas’ book is swapped by musicians the world over as they compare notes on the perils of touring. Of course there are plenty of positives, but for every great gig or perfect road trip, there are drummers left behind at service stations and long, torturous journeys between shows.

big thanks @TheBarrowlands for having us with @PIXIES. insane venue!! now we drive to @o2academynewc...#vivaroontour thanks @vauxhall pic.twitter.com/KxzcCBCv60

"Vivaro On Tour has saved British acts an estimated £30,000 in van hire fees."

Aware of the downsides of touring, Vauxhall decided we wanted to do our bit to help. We particularly wanted to aid the new acts on the verge of being inducted into a life of loading in and out and motorway service station meals. We have a strong history of supporting emerging UK talent through endeavours like the Vauxhall Fashion Scout, our apprentice and graduate schemes plus projects with schools close to our Ellesmere Port and Luton plants, so helping out aspiring musicians seemed obvious.

Last year we teamed-up with Independent Venue Week to launch Vivaro On Tour, an initiative which supports up-and-coming UK musicians by providing them with a free Vauxhall Vivaro van to tour in. We recognised that it’s not always financially possible for emerging artists to get out on the road – the cost of van rental and fuel alone often means tours make a loss – so Vivaro On Tour aims to take the financial pressure off artists by offering them use of a practical, Brit-built Vivaro to get them around.

Independent Venue Week was the natural partner for us to get our vans out and about to support the British music scene. Not only do we share the same values when it comes to backing in British talent, but their close relationship with the country’s venues helps to ensure that talent is heading in the right direction.

Since we put our Vivaro on the road a wide range of acts – plus all their kit – have climbed onboard, clocking up over 100,000 miles right across as they’ve criss-crossed Europe. Frankie & The Heartstrings (pictured), Yak, Get Inuit, Sunset Sons and Slaves are among the bands that have made use of the van, and in the process we’ve saved British acts an estimated £30,000 in hire fees – plus we always hand the Vivaro over with a full tank.

But 2016 was just the beginning for “Vivaro On Tour”. Over Christmas we gave the first van a full service to prepare it for another year on the road, while we’ve also kitted out a second, brand new Vivaro with the all mod cons a touring musician needs.

So if you’re an act who needs help to hit the road we’d like to invite you to tour with Vivaro – or if you’re a fan and know of a new talent who you think would benefit from some wheels, please forward the following on to them.

To apply, simply email vivaroontour@vauxhall.co.uk with details of your tour – dates, locations, etc – plus a link to your website and we will do our best to accommodate requests. Plus keep an eye our for the Vivaros on the road during Independent Venue Week 2017, because Vauxhall will be doing its bit to make sure Britain’s best venues will be filled with its best talents.

Related read: What's it really like to tour around the UK's independent venues?

Got Cape: Sam Duckworth on Chronicles...