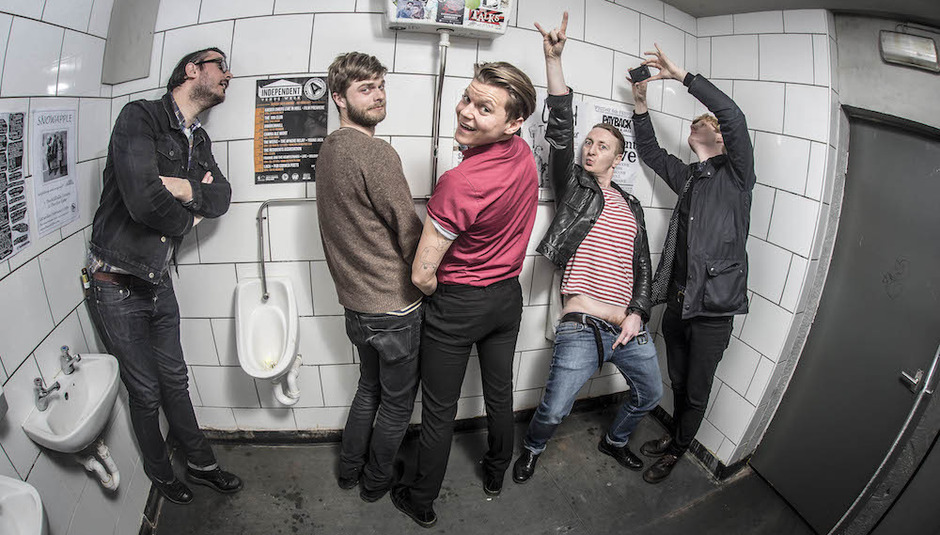 For Independent Venue Week, indie-pop kings Frankie and the Heartstrings toured the UK. This is Dave Harper (@pearlharper) from the band's report on the state of the nation's "toilet tour" circuit...

I don’t know how many tours we have done. A lot. The only thing they all have in common is the coffee we need but cannot afford, and unexplained bruising.

This tour was in support of Independent Venue Week. It's not like we could say no is it? We fucking run one.

Now, obviously we felt the need to court our evangelical, self-righteous independent bastion status - it's easy when you’ve got the minerals. I mean, the closest I ever came to a trust fund was when my mate Dave asked me to keep a tenner for him when he was wankered. Personally, I wanted to look other venue owners in the eye and hopefully see another bloody-minded damaged bastard looking back at me.

Let’s face it: The UK's multitude of brand-branded Academies wouldn’t touch us with a (appropriately branded) shitty stick. So we play independent venues. Because we have to. It’s just lucky that we love playing them, I suppose.

First night and we are at Bedford Esquires. Can’t even remember meeting the owner here. Probably means he’s doing his job (see above). You could be mistaken for thinking that Bedford Esquires is where David Brent and Finchy go to pull a couple of middle-aged scorchers, but Esquires is very typical of what we find in every independent venue we visit. There's a mesh of assorted gaffer tape corpses everywhere, some reasonably well thought-out dressing room graffiti, a Henry Hoover, a Frankenstein PA, and an in house sound guy who knows the room far better than your sound guy that you didn’t need.

(Oh and by the way, if you have an ego chaperone in the form of a tour manager, sound guy or more likely an amalgamation of the two, then you'd better know that he’s getting paid considerably more than you are).

I should point out now that we are far from martyrs here. This tour was sponsored by Vauxhall. This meant a free van and an increased likelihood of getting somewhere close to your ‘rider requirements’. While we are talking about riders. Ours is a disgrace. You need water, beer and something to eat. You do not need a signed picture of Vicky Entwhistle. Although I am obligated to thank Sybil Bell from Independent Venue Week for that particular item.

F: UNBELIEVABLE SCENES! We've been asking for this on our rider for years BEDFORD HAS DELIVERED !!! #Entwisle pic.twitter.com/YGf3pGXvRA

We won't bore you with a blow by blow account, but aside from the aforementioned first night at Bedford Esquires (great standard of graffiti), our IVW tour took us to The Social in London (not sure concrete tables on the stage are a great idea), Boiler Room Guildford (there’s a Chinese takeaway in the venue), Gwydyhw in Cardiff (proper people), The Square, Harlow (man with kilt showing everyone his cock and balls), Hull Adelphi (the epitome of Independent, fucking love it there) and The Cookie in Leicester (Tim Minchin has played here. He’s a cunt).

We hear the term 'toilet tour’ a dozen times during the week. Do you realise how insulting that is to the PA guy? The owner? The fucking cleaner? That’s someone’s Mam you cunt.

Right now, the way we consume music just seems to be eating itself alive. Everyone is looking at someone else to make the move to make it all better. To wrap the blanket back around the music industry. Even as someone who makes a (partial) career as a musician (I know, I know) I can take a little satisfaction that the venues we played this week were functioning exactly the same way 10, 15, 20 years ago. These lone-wolf venues are forced to bottom feed while the branded sharks pick what they want from the all you can eat wankers buffet...

These venues trundle on, and they are important. Imagine your local independent venue just being erased and then imagine the memories that die with it. The time you saw [insert band name] at [insert Independent Venue name] and now they’re playing the Tampax Megaplex or whatever. Independent venues are your bragging rights in your town or city. Unlike other venues they have a symbiotic relationship with bands. They need us and we need them.

F: Someone gave us a @vauxhall for @IVW_UK here is a hilarious insight into our lives http://t.co/q1arsHSqy1