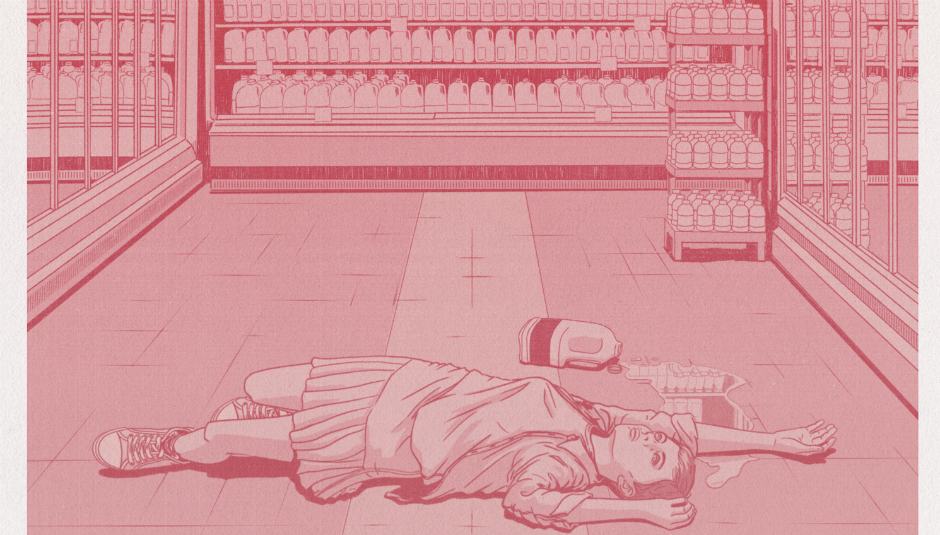 Us vs Them Curated By Los Campesinos!

Us vs Them Curated By Los Campesinos!

“What country did Michael Mifsud play for?” There aren’t many gigs that kick-off with a frighteningly obtuse football quiz, so kudos to the Us vs Them all-dayer at Leeds’ Brudenell Social Club for making an immaculate start in approaching things differently. (Oh, and it’s Malta, like you didn’t already know.) First announced at the tail end of the summer, summarily selling out, the event was the first in a series that’s based on a simple premise: fill a great venue – in this case the jewel in the crown of the north, and maybe the whole country – and give the headliners free rein to curate the bill.

The simplest ideas are often the best, and Los Campesinos! prove to be inspired inaugural collaborators. Their established knack for picking excellent touring buddies easily upscales for the day, and they even claimed to have surpassed their own expectations with an outstanding bill of established and upcoming alternative and indie rock. Their idiosyncratic charms in alliance with the quality space makes for essentially a mini festival at a bargain price, one that should go on to dovetail nicely with the venue’s other semi-regular Gold Sounds events.

Punters in LC!FC jerseys peruse vegan snacks as they session the IPA. Door staff are super friendly. Bands mill about the idiosyncratic venue – an ex-WMC that’s been repurposed with care by manager Nathan Clarke to retain all of its easy sense of community – seemingly impervious to pre-performance jitters. The regulation smell of weed wafts across the car park, adding extra tang to the excellent pizza from the food van. Someone brings a King Charles Spaniel in, and even it remains remarkably unflustered (although, that said, it had just wandered through the car park). The Brude also has that most authentic of gig facilities: a toilet that's running independently of whether it's actually been flushed or not. It’s the real deal.

But it’s the obviously the performances for which people clock in. Slow Club ease out a stripped-down set early doors, adopting the lax atmosphere as Rebecca Taylor asks for prompts as to how long they’re meant to play. Weddings don’t even announce who they are during their set, presumably to pass over having picked a name that’s virtually un-Googleable (seriously, try it; “Weddings” is no good, “Weddings band” even worse). They meet their football quotient via a guitarist who looks remarkably like a younger Mauricio Pochettino with a penchant for plaid, and an overly caffeinated drummer provides the vim and vigour for their lissom, chiming indie.

Manchester’s Hot Shorts deal in an immensely and immediately likeable abrasive sludge, with tongue firmly in cheek. Their contribution to the impending festive season comes in the dubious form of a couple of minutes of wall-to-wall distortion and strangled vocals. Brilliantly, it’s called ‘Sex Christmas’. A man near me regularly punches the wall in time, so taken is he with the churning, boisterous noise (or with the idea of a sex Christmas).

I could chunter on about how great DiS Neptune Award winners Martha are until I’m blue in the face, but I’ve a word count here. The vegan indie pop mavericks conspired to accidentally leave their merch back at home in Durham, so anyone foolish enough not to have bought this year’s blinding Blisters In The Pit Of My Heart had to wait for their wax. Still, if anything, it sharpens minds to the moment as the band live up to their already excellent reputation. They hare through their set of bittersweet songs that somehow both bemoan and celebrate everyday travails and big-ticket issues: boring jobs, isolation, awkwardness, loss. They’re a thrilling live unit, yet it’s as if excellence wasn’t the aim – it's just a happy by-product of their interpersonal chemistry and vision; they're the rare act where the odd flub even help stock their already abundant charms. Hearts swell, pints are necked, lyrics are screamed. Their set is one long highlight, yet again.

The bridge between Martha and Hookworms is, of course, the latter’s MJ, the talented producer behind Blisters… as well as records from a host of esoteric indie-leaning acts. His band inadvertently provide the only hint of frayed nerves on the day as technical glitches, explained via the classic medium of a scrawled note on a pizza box lid, mean they can’t unveil material from their new record as planned. Still, few bands have the luxury of being able to fall back into a set of inspired, face-melting psych scuzz, though it’s obviously a shame they’re denied the fullness of their intended range.

The day’s only other real pity is that more people aren’t drawn to the Games Room for Brighton’s Fear Of Men - many choosing instead to stake out positions for LC!’s headline slot, but those wise enough to watch are treated to a riveting set of propulsive post-punk meets indie. Guitarist Daniel Falvey seemingly plays about three notes all evening, instead wrenching swathes of noise by flailing his instrument around as Jess Weiss coils beguiling melodies around the squall. ‘Islands’ has a dark bite, embodying their dream-pop that’s shot through with compelling unease and disquiet. Two albums in and a deserved leap to wider public consciousness must lie just round the corner.

That some forego such a set only underlines the esteemed position that indie rock heroes Los Campesinos! occupy with their committed fan base. Having played barely a handful of dates this year, instead leading normal lives before the business of readying the feverishly anticipated new record Sick Scenes that’s due at the end of February, the air is crackling with expectation as they emerge. Most bands would be forgiven for easing into such an occasion with familiar material, but LC!, careen headlong into the new.

‘Renato Dall’Ara (2008)’proves a pugnacious opener. Not only is LC!’s knack for a title is still potent, but their lyrical bite is also going strong – a PCSO is delightfully described as “a part time grass and a full time asshole”, and there’s a knowing lager/Interpol song title pun. It paves the road for ‘I Broke Up In Amarante’, the first single from LP six. It goes down like a classic, prompting abandon, with the band relishing all its rawness that mirrors the desperation of a lyric about negotiating a summer breakdown and crushing hangovers in a deathless Portuguese town. The performance and the resulting sauna-like temperatures render the term “warm up” moot. It’s also an unfettered treat to hear another new song like ‘Slow, Slow Death’, which achieves the feat of showcasing a line about having a beau’s initials in a heart tattoo without it sounding remotely cloying. Despite a gaggle of sweaty souls using its midtempo sway for a beer and bladder break, it’s destined to be a fan favourite: this one will be slurred and shouted in just a few months’ time.

But that’s your lot – three newies, all aired before halfway. The temptation doubtless would’ve been to debut more, either through a keenness to impress with minty-fresh exclusivity or to road-test material that’s the reason for an approaching US tour. But for a band that have carefully refined their sound, and built up a cult fanbase in the meantime, an evening like tonight – topping a day they’ve overseen – means more now because it’s about others.

It just shows how maturity is actually now LC’s watchword. Harnessing it tonight, it’s in many ways a final victory for a band unfairly lumbered with the millstone tag of twee, cardigan-wearing scenesters from the off – a bit of emo fluff from a scraggle of weirdos playing in the SU bar and not worthy of proper consideration. Going the hard yards, musically and lyrically, may have opened the door to a band obsession with death and aging, as on previous LP No Blues, but the past being foremost in their minds draws them together. Navigating their back catalogue for a career-spanning treat of a set that delights the crowd, this reach takes selflessness and a retrospective maturity and wraps it around a classic, punchdrunk urgency, touching on all their previous LPs.

There’s the headswim of ‘What Death Leaves Behind’ – by some distance the best indie rock song containing the word “tautology” – while the all-conquering ‘Avocado, Baby’ from their recent sunnier, more rounded musicality, helps build momentum pre-encore. The callisthenic thrum of ‘By Your Hand’ houses a playfully extended snooker-sex metaphor, while the classic line “But you could never kiss a Tory boy without wanting to cut off your tongue again” from the rabbit-punch of ‘The Sea Is A Good Place To Think About The Future’ is roared back at the band. Reaching further, ‘We Are Beautiful, We Are Doomed’, ‘Miserabilia’ and ‘You! Me! Dancing!’ prompt near delirium.

Tonight, maturity and urgency combine: LC!’s set is still heavy on concussive thrills, and is ramshackle in all the right places. It feels like we’re all bound together in a shared escape, like we’re taking to the waves on a raft lashed together with twine. There’s a no frills, everyman bolshiness here that’s the hallmark of staunch British indie harking back to halcyon Britpop days, but unlike many of their contemporaries, and most bands to have created blog buzz since blogs were even a thing, LC! more than equal this with the nuanced and subtle; there’s humour, playfulness, lyrical sophistication and – above all – genuine warmth. The crowd revel in the set of honed, poised material – there’s the libertine escape of a drunken Saturday, but tonight is also part goal celebration, part catharsis, part group therapy session, part hug. It’s also staggering that, despite the flux of members over the last 10 years and their current geographical spread, this is spirited up by a band that’s technically under-rehearsed and not yet in touring shape. But there are no missteps, and no hint of any. At times tonight they feel invincible. To borrow from the football argot they cherish, tonight Los Campesinos! score screamer after screamer.

Drowned in Sound Staff Favourites of ...