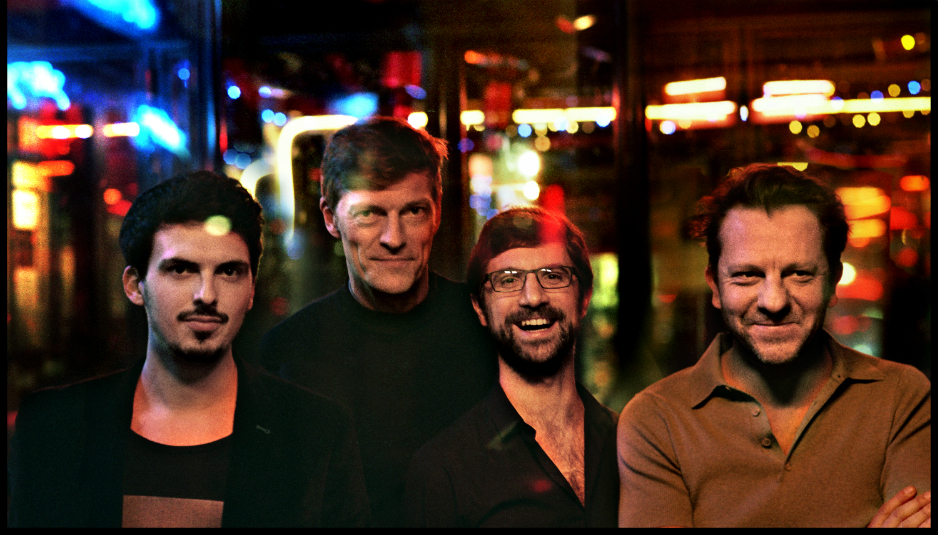 Woah there! To watch Tom Barman whirl and prowl across a stage is to watch the consummate front man at work. Better known for his work with indie legends dEUS, he's also one-half of dance duo Magnus and, for the last two years, singer and mischief maker for TaxiWars, his latest project and one that indulges his deep love for jazz.

But this is no chin-stroking, ego-stoking exercise in precision or tired old tropes. Oh no. For Barman, alongside saxophonist Robin Verheyen, double bassist Nicolas Thys, and drummer Antoinne Pierre - esteemed jazz musicians all - has come up with something far more indebted to punk and rock sensibility than anything resembling Jazz Club. From the smouldering to the groove-laden, the frenetic to the sultry, the quartet are carving out a niche on their own terms, and most definitely sniffing on their own turf.

Tom Barman: The band only had to play this song for a couple of bars for me to know exactly what to do with it. This was gonna have a Stooges-like energy, a drum and bass feel and nasty lyrics. The title was inspired by an actual fever: physical and emotional. After four Gauloises cigarettes the words were down on my iPad. I sang it straight away and felt much better!

TB: Another great Verheyen-groove, leaving plenty of room for me to just do my thing. This song is a good indicator for future TaxiWars material.

TB: Robin is a fantastic composer, but sometimes he writes too many pieces for one song. So he lets me cut and paste his compositions, make edits, and use only what I need. After chucking 70 percent out, we ended with just this sax melody. I sang it, the band played it, and that was that. Took 15 minutes in total.

TB: Nice dubby feel to it. And singing in French is always a breeze for me. It's so much easier to get away with stuff!

TB: With Robin, Nic, and Antoine playing this so beautifully, I really feel privileged to be part of this. My role in this song is to give a resting point. And to stop them from going on forever, haha!

Robin Verheyen: The idea of this song came to me on a plane from NYC to Brussels. 12 hours later we rehearsed the song with the band and found the vibe was a perfect match for the band. Tom then wrote beautiful lyrics that made this our most minimalist song ever.

RV: This song is based on a traditional blues, but gets a different feel because of the 5/4 time signature. The organ adds a little rock to the vibe, and it’s all about raw energy in this one. I initially hated the organ Tom added, but now have grown to love the vibe it brings to the tune.

RV: This was the hardest song to record. It sounds very straightforward but is in fact very complicated to play. We went for an all-out punk energy here and it has real trashy feel. After 15 takes I almost passed out…

RV: This song was inspired by our travels and the feeling of being on the road constantly. Like a train that just keeps on moving in this slow but steady pace.

RV: This is the most epic song on the record. African Rhythms come together with a rock feel. We had lots of fun adding piano and keyboards to this one. It has become one of our favourite live tunes. Tom uses the space beautifully which inspired me to really go for it in the solos.

Taxiwars' Fever is out now on Universal Music. For more information about the band, including upcoming tour dates, visit their official website.

The Friday Fangasm: America Eats Its ...