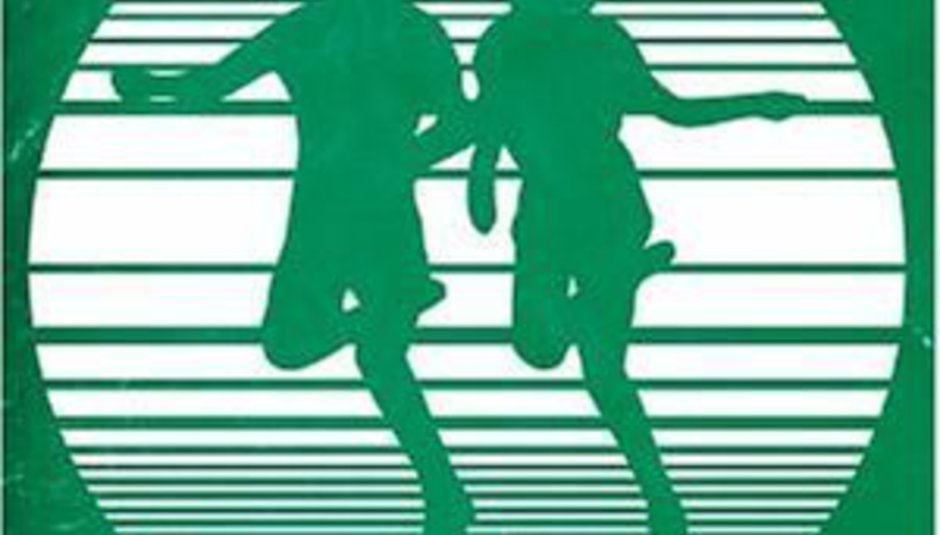 This summer the much-revered Rival Schools, whose United By Fate LP of 2001 (pictured) remains a favourite amongst DiS readers and staffers alike, are to perform live in the UK and at a number of European festivals, including the DiS-sponsored Hove Festival. The Walter Schreifels-led four-piece enjoyed a great degree of acclaim prior to their 2003 disbanding, and their return is likely to be seen as a precursor to the possibility of that fabled second album.

United By Fate, reviewed here, reached number 44 on Our 66 of 2006, a run-down of the best albums since 2000; while rightly regarded as a brilliant post-hardcore LP infused with pop sensibilities, the album landed at a time when its genre of choice was enjoying great popularity, particularly in the UK music press who were directing ears the way of Michigan, Milwaukee and Missouri for the sweet, sweet sounds of what can also be regarded as one stage of what we widely consider emo to be today. I.e.: emotional hardcore, lyrical honesty set to combustive riffs and hook-filled melodies, with just a tinge of melancholy creeping in.

While emo’s roots go way back to the mid-‘80s, and bands like Rites of Spring, Shudder To Think and Hoover – we’re not giving the genre the Math-Rock Family Tree treatment just yet – the period of 1997-2001 produced a number of albums that, alongside United By Fate, should be held aloft as perfect examples of their kind. Here, DiS takes a little look at a few other LPs that, really, any self-respecting fan of Rival Schools should also have on their shelves. Think of these releases as being representative of a Golden Age of emo… Milwaukee-based outfit The Promise Ring had already made an impact upon the indie fraternity with their debut album 30? Everywhere, but their second of a year later saw them cross over onto mainstream radars with MTV getting behind the album’s key single, ‘Why Did We Ever Meet?’. Immediately engaging, the album’s syrupy lyrical content, showcased on said single, led to the band being classed as an emo act, even if their jangled arrangements were an echo, of sorts, of ‘80s R.E.M. and their peers. Featuring a former member of Cap’N Jazz amongst their ranks – namely Davey vonBohlen, who’d originally started The Promise Ring as a side-project to the Kinsella brothers-featuring alt-rock outfit – the band ultimately laid the foundations for what is now considered emo, by mixing accessibility with a degree of sentimentality and originality in their sometimes cutesy and quirky wordplay. While further albums followed the release of Nothing Feels Good _– their final, _Wood/Water, the only one to not be released via Jade Tree – not one matched the engrossing content found on this sophomore effort, an album so vital to the development of a fluctuating-still movement that it lent its title to a book on the topic of emo, Nothing Feels Good: Punk Rock, Teenagers, and Emo, by Andy Greenwald.

Video: ‘Why Did We Ever Meet?’ Forming in Illinois in 1993, Braid were among the most productive post-hardcore/emo groups of this Golden Age period we’re focusing on, releasing seven long-players including 2000’s career-summarising live offering Lucky To Be Alive, which rather ironically contained new material. Debut Frankie Welfare Boy Age Five was a sprawling, inconsistent mess of muddled ideas and semi-realised potential, and its follow-up The Age Of Octeen failed to win over the critics entirely. Not so Frame And Canvas. Released in 1998, Braid’s third LP was a perfect blend of sing-along choruses and addictive guitar-pop motifs; ‘Killing a Camera’ was an obvious first-time standout, but opener ‘The New Nathan Detroits’ and ‘Milwaukee Sky Rocket’ quickly became live favourites, both making the Lucky To Be Alive tracklisting. After splitting in 1999, frontman Bob Nanna and drummer Damon Atkinson formed Hey Mercedes, whose Everynight Fire Works debut features below, and Braid briefly reformed in 2004 for a handful of shows in the States and Japan. No UK gigs happened though, and it’s unlikely they’ll tour again anytime soon. Something To Write Home About

Forming in 1995, The Get Up Kids’ second album Something To Write Home About completely eclipsed their 1997 debut Four Minute Mile (recorded with Shellac’s Bob Weston) in terms of critical praise and commercial rewards, becoming a must-have for fans of the blossoming emo scene. Admired by the likes of Weezer and Green Day – they opened for both on stateside tours, and also attracted sponsorship from Napster – The Get Up Kids soon outgrew their Kansas City roots to become a fixture on international festival bills, appearing at Reading in the UK among many others. Something To Write Home About not only opened new doors for its makers, but also established Vagrant as an independent label of fine pedigree; it would later go on to release albums by Alkaline Trio and Eels. Although never keen on the ‘emo’ tag, The Get Up Kids nevertheless acknowledged that Something To Write Home About was a record that fitted the mould quite wonderfully well, and its huge appeal must be regarded as a turning point for the genre: no doubt Fall Out Boy were taking notes. The band broke up for good in 2005 after also exploring a variety of side projects; like Braid, a live album, Live! @ The Granada Theater is their parting release. Everything You Ever Wanted To Know About Silence

Glassjaw’s explosive debut Everything You Ever Wanted To Know About Silence was a critical smash, muddling conventional east coast hardcore elements – the then-quintet hail from New York – with abrasive and tremendously emotive vocal performances from frontman Daryl Palumbo; they could, conceivably, have been massive had it not been for their singer’s persistent problems with Crohn’s disease, which prevented the band from touring much between this and its 2002 follow-up Worship & Tribute (indeed, they still struggle to fulfil live commitments). As it was the band enjoyed a substantial underground following (and continue to) but never truly crossed over, and their label allegedly did very little to alter that; a predominantly metal stable, Roadrunner had perhaps bitten off more than even they could chew with this beast of an album, and their promotion for it was average at best if tales are to be taken as gospel. Everything… was produced by nu-metal father figure Ross Robinson, who would work on the same year’s Relationship Of Command by At The Drive-In (review). Glassjaw’s as-yet-untitled third album is expected later this year. Although playing in rather more hardcore circles than the above-mentioned acts, there’s no doubt that Michigan’s Small Brown Bike, in hindsight, were an emo act worthy of acclaim to a Rival Schools level. Gruff of voice and crunching of riff though they were, attracting comparisons to Hot Water Music and Planes Mistaken For Stars (themselves an act worthy of investigation: fans of the heavy check out 2001’s Fuck With Fire, softer sorts aim for their self-titled EP on Deep Elm), the band’s vocals from brothers Mike and Ben Reed were rarely anything other than what’s traditionally considered emo: heart-on-sleeve outpourings, albeit set to some truly devastating arrangements. Slow build-ups lend Dead Reckoning, the quartet’s second studio album (and second to last, 2003’s The River Bed their final release), a real sense of drama, as songs like ‘The Vacuum’ and ‘My Own Disaster’ crank the tension considerably before inevitable release, a tone of true threat trespassing into the lyrics. The album’s closer, ‘I Will Bury You In Me’, remains a real string-tugger to this day, genuine emotion pouring from the speaker cones as the drums go ballistic. Small Brown Bike split in 2004, playing their last show at Chicago’s Fireside Bowl, but reformed briefly in 2007 for a few more gigs to support a friend who was suffering from leukemia. New Jersey act Thursday didn’t really know what they were getting into when signing with Victory for the release of their second album, Full Collapse. Their debut, Waiting, was handled by local label Eyeball – who also released early material by My Chemical Romance – but the band stepped their game up for its follow-up, which saw the band indulge themselves by incorporating newly turbulent time signatures and vocalist Geoff Rickly become something of a poster boy for emo and post-hardcore. Despite the greater distribution channels Victory provided the band, Thursday were unhappy with some of the ways their image was used in the promotion of Full Collapse – one story tells of the label wanting to make whoopee cushions branded with the band’s name. Also, the single ‘Understanding in a Car Crash’ was given a video made up of random live footage, without the band’s consent. (The second single, ‘Cross Out The Eyes’, had a ‘proper’ video – see below.) Relationship souring, Thursday terminated their contract with Victory by releasing the poor Five Stories Falling EP, essentially a live record with one new song on it, which the band encouraged fans to download rather than purchase the EP. Still touring today, Thursday’s profile may be a fraction of what it once was, but their Full Collapse album was one of the major releases of its kind at its time.

Video: ‘Cross Out The Eyes’ Bob Nanna’s post-Braid outfit’s debut album was a triumph of pop immediacy over indie-rock clichés, unafraid to bust out the sing-along moves but also retaining that underground edge that’s ensured that his previous group remain such a hugely revered band. Following a self-titled EP on Polyvinyl – home to Braid, of course – Hey Mercedes signed with Vagrant – home to The Get Up Kids, of course – for their album, Everynight Fire Works. From the first song, ‘The Frowning Of A Lifetime’, onwards, it’s clear that no quarter is being given in songwriting terms, the crisp production from J Robbins – himself a key mover and shaker of this period, as frontman of Burning Airlines, who fizzled out in 2002 after a pair of recommended records – lifting these compositions above the crowded market’s also-rans. Hard touring from the outset – in 2001 they played well over 100 shows – Hey Mercedes opened new ears to the emo scene, and to the likes of The Promise Ring, Jawbox, Texas Is The Reason, Jets To Brazil and more. While Everynight Fire Works was never a hit, despite favourable reviews and underground responses, its basic framework of insistent guitars and catchy melodies, together with those essentially soul-bearing lyrics, has undoubtedly been influential on today’s emo torchbearers.

Video: ‘The Frowning Of A Lifetime’ (live)

DiScuss: As the above is by no means exhaustive, what were your favourite post-hardcore/emo releases of the Rival Schools era? At The Drive-In aren't here because... well... because you should all have their records already. Space here for The Ataris, or The Movielife? Too pop for ya? Misery guts…