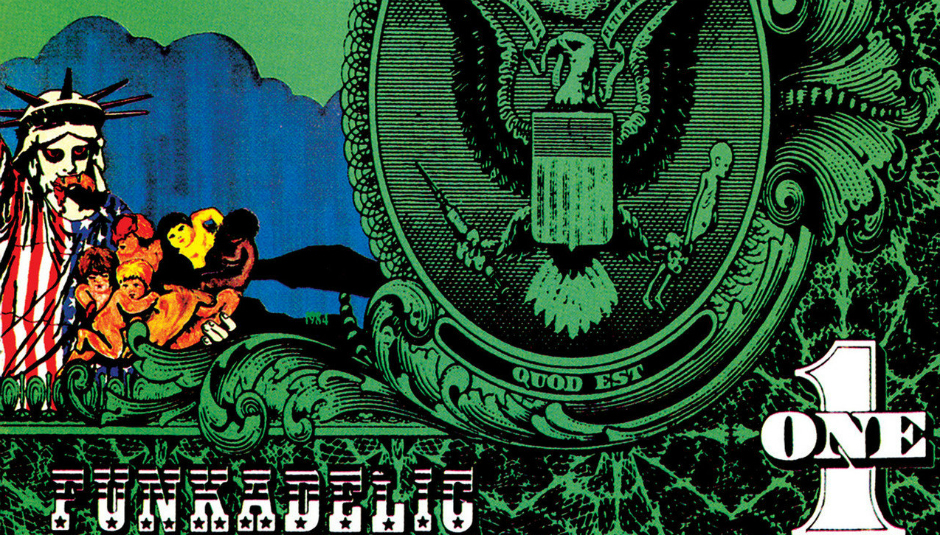 The Friday Fangasm: America Eats Its Young by Funkadelic

The Friday Fangasm: America Eats Its Young by Funkadelic

It was the early 70s. The Vietnam War was happening. And so was heroin. The drug was taking its hold on the inner city black neighborhoods, and it also took its hold on George Clinton’s close friends and bandmates. Eddie Hazel, Billy Nelson, Tiki Fulwood and Tawl Ross. All worn down because of the drug. Clinton started working on Funkadelic’s fourth album American Eats Its Young, replacing his old bandmates with a new group of funky musicians called the House Guests consisting of bassist Bootsy Collins, his older brother guitarist Catfish, Kash Waddy on drums, Chicken Gunnells on trumpet, and Robert McCullough on saxophone, a group that were notable for backing James Brown. Together, with Clinton and synth legend Bernie Worrell, this newly formed Funkadelic made one of the most politically charged and musically diverse albums of all time. The playful looseness of previous records replaced by more structured and focused arrangements, still wacky in their own right, but tighter and cleaner. Challenging the listener both musically and emotionally.

Clinton became serious. Like Marvin Gaye and Stevie Wonder, he was inspired by The Beatles and The Who and wanted to make a concept record about the black struggle. He cleaned up and got to work. “That album was really a test to see if I could do it straight after all that acid. All the ones before that I did on acid, and I wanted to see if I could make any kind of sense! The songs have got horrible names but they’re pretty straight. I did that album straight. I mean, as much as I could do it and prove to myself that I could control myself. The sixties was over, so I tried to regroup and see if I could write an album of songs that was chronological” he said in an article on The Quietus.

For two years Clinton travelled the world to record the album; Toronto, Detroit, London. The band would play for hours in the studio, then Clinton and Worrell would arrange the jams into songs. What came of this was a double album tied together by its musical experimentation and political message. Right off the rip, ‘You Hit The Nail On The Head’ kicks the door open with a heavy fusion funk jam that, right as you feel comfortable in its rhythm, takes a hair pin turn into a laid back, slinky ‘Sanford & Son’ groove. The first words are sung, and they set a tone for what’s to come; “Just because you win the fight don’t make you right / Just because you give don’t make you good.”

It's a strong statement sung in a whimsical way, but that’s Clinton’s genius; he’ll grab your attention, making you think that you’re in for a joke, then lay it to you straight. This continues throughout the record, but the subject matter is just as eclectic as the music. The song titles speak for themselves; ‘If You Don’t Like The Effects, Don’t Produce The Cause’, ‘Everybody Is Gonna Make It This Time’, ‘Wake Up’. All politically charged. But then there’s ‘We Hurt Too’, a lush orchestral ballad addressing male vulnerability. “Just because it is said that a man is not supposed to cry / Just because we conceal what we feel, we hurt deep down inside / Why don’t they realize that it’s just a disguise to hide the way we feel?” he sings. An appropriate message, not only to the black community, but to the world at large - it was this song that made AEIY seem so real to me. So fresh and, ultimately, just so sincere.

But it’s the music that really sold me. The orchestral arrangements in ‘We Hurt Too’, the pedal steel on ‘Biological Speculation’, the signature Funkadelic psychedelic rock on ‘Loose Booty’, and the title track. This smorgasbord of styles and ideas come together to create a chaotic masterpiece. “I took all the different things and threw the shit all together,” he told The Quietus. Some might find this confusing but, for me, it left me wanting more. Thinking: “What’s to come on the next song?” and, ultimately, it gave me the confidence to do the same with my music. I could relate to it and it all made sense. Mixing different musical styles seemed like the most appropriate way for Funkadelic to say what they had to say; the band seemed vulnerable on all fronts and it was charming.

Funkadelic’s music is cerebral. Each record is a thoughtful timepiece about the black struggle. What sets them apart, though, is their attitude. They’re having fun and won't let the hard times get them down. They are going to address the insecurities head on and throw a party in their honour. It’s okay to cry! Life sucks but that won't stop me from dancing! As a young black man, this is exactly the message I needed to hear. And as a young musician these experiments helped me understand one thing: Don’t be afraid of anything!