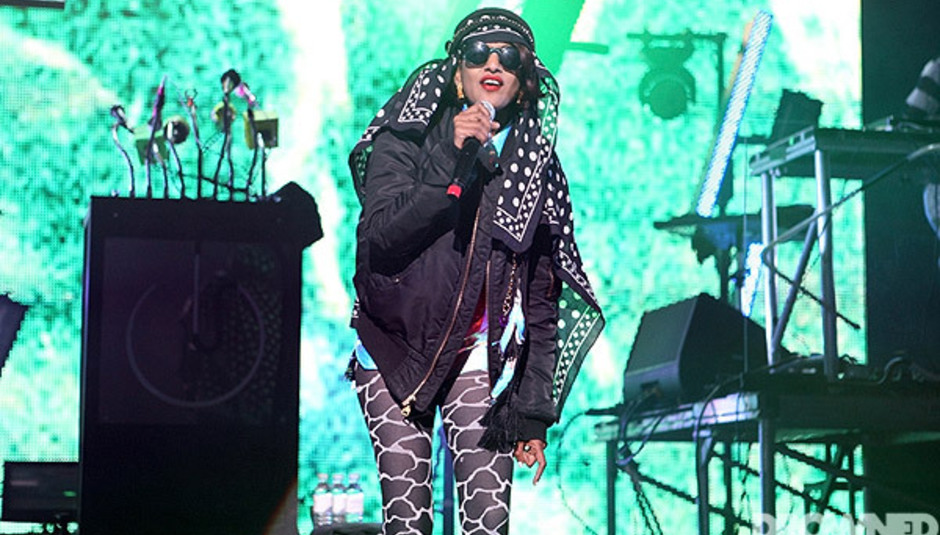 All’s well that ends well: it’s the maxim that, you can’t help but feel, best sums up M.I.A.’s whirlwind 2007. Back in 2006 the future was looking decidedly bleak for the follow-up to the London firebrand’s acclaimed debut Arular when a failed US Visa application scuppered a planned Timbaland collaboration which would have seen the Virginia mogul produce the record.

Actually, it turned out to be something of a blessing in disguise, M.I.A. opting instead to hotfoot it round the globe with underground DJ Switch, recording in India, Australia, Liberia, Trinidad, Japan and Jamaica in search of a wider-reaching sound.

Smart move: M.I.A.’s artistic merits stand and fall by her capacities as a sonic weaver of disparate cultural threads, and the seething mass of contradiction encountered on her travels helped produce Kala, which is essentially Arular with a busier-looking passport.

Naturally, it went down a treat…

How’ve you felt about the way Kala has been received critically?

It’s really hard for me to tell because I’ve been on tour in America and I think you get into a little bit of a goldfish bowl situation, where you don’t really know what’s going on outside. The fans in America have been really good... in the beginning I used to get criticised for my faults but at the moment it’s the only thing I’ve got going, you know it’s what people seem to like me for... and when I meet my fans they’re always going, ‘we like it ‘cos it’s so confusing and fucked-up and weird and you don’t have a hit ‘cos we know that it’s real.

Do you think it’s that people were more ready for an M.I.A. record this time around? Arular must have taken people unawares...

Well I think people have got me on a more human level now... I felt like when I started off in England I wanted to make something and be respected or accepted as an equal creative person and now I wanna make an album just because I have so much fan support. I did an interview last week in Montreal and I said that I was quitting music and the response to that on my MySpace has just been so crazy...

I’d heard something about that. Was it said in jest or do you think that’s a real possibility?

I meant it. Because when I did Arular I wanted to do something for myself, whereas the second time I did it ‘cos everyone said I’d fluked it and that somebody else made it for me or it was all these people behind what I did. So now I feel like I don’t have to prove myself, and I don’t wanna push an album in people’s faces just to be like ‘listen to me, I make music...

You had some success with your art before turning your hand to music – any idea what form a new project might take?

Well if there’s a vibe to what you’re about then you can recreate that in any medium. There’d be less compromises too. What pisses me off in music is that ultimately you do have to work within the format, y’know you go on MTV and they’ll ask if my video can be played between Beyoncé and Rihanna which pisses me off, then I go, ‘Fuck you, I don’t wanna go on MTV then’... now you can check it up on Youtube and on MySpace and you’re not so dependent on those formats but there is one all the same, you know...

I found it really fun in the beginning to enter the music industry just to shake the dust up a bit, but now I’m a part of it and sometimes it’s good to withdraw. It’s not that I’m giving up what I do, I’m just giving up a format. I could easily make music again, it’s just it has to be a different framework. People are open to having more thoughts and ideas now. Three years ago that was such a dead-end thing, there was no hope in hell for me to come out with this shit in London and have people give me any respect for trying something different.

Was it a conscious decision to ‘get out a bit’ while making the new album?

No, it was because of the Visa issues. I was in London and I had nowhere to live. I bought my mum this couch - my mum’s always been in a council house and we’ve always had second-hand couches so I got her this amazing big one ‘cos every time I go there I sleep on it. Then when I came back off tour my mum had given it away and she went back to a second-hand couch she’d bought from the church or something, I was really pissed off... (laughs) I just thought I’d already made Arular in London and I’m just couch surfing in loads of different people’s houses. I felt like it was no loss to do that anywhere, I could be couch surfing in Liberia to make the album.

It wasn’t a determined effort to stay ahead of the curve then?

Not really, I think the thing I’m really good at is survival, and when somebody takes away an opportunity or something...

Yeah... It’s like part of you wants to go to Hollywood and move to Beverly Hills and be a star and do the rags-to-riches story, but that wasn’t really on my cards. When they said you’re not gonna get the Visa to work with Timbaland, I’d waited on that moment for so long, but I wasn’t gonna sit around for them to ruin my life. It’s like there’s this mythical concept invented by George Bush about terrorism and how we need to beat Bin Laden and therefore I need to stay on the couch in Norwood until he figures it out?

This is the point to that whole refugee mentality, you find ways around shit. If America turned round and said you can’t come here to make money and work with our producers then we go well you know what, you’ve just wished upon yourself the worst thing, I’m gonna go and put African people, Muslim people on the record and that’s the scariest shit to you. You just amplify whatever it is they’re scared of, and that’s what I wanted to do.

Were you at all wary the album might end up coming off touristy and if so how did you counter that?

Well I mean I spent ten years in parts of the world like that, it’s not like I was reading it in fucking Rough Guide To Cambodia. I’ve just learnt the cultural language to be a part of western society but actually I come from their society, and both of them are equally important to me, there’s good things about both of them and I think if you approach anything with honesty... that really is my plot to mash it up and to custom make some sort of philosophy where you’re not constantly being torn apart; something that allows you to be lots of things at once. The words ‘torn apart’ shouldn’t even exist, everything should be embraced as part of who you are and what you do. If you learn to do that you can get happy without having to live in expensive houses.

You clearly thrive off a certain sense of contradiction in your work, which has in the past been accused of tending towards sloganeering. Is it less important to you to present some kind of coherent ideology than to convey a sense of immediacy?

Well I learnt that sloganeering over here, from the eighties when I came over to England. I was the image that was sloganised by Bob Geldof or whoever... [With Kala] I wanted to share with the rest of the world the idea that you can be poor and happy, I didn’t want to be crying and looking at everyone going (adopts spookily accurate American accent) ”oh my god this is so terrible, why does this happen?” because it’s bullshit, it’s happening ‘cos there’s so much corruption and there’s just these mad crazy politicians fucking it up.

You have to help the kids understand what they have is good enough to survive. It’s like with the Aborigine kids (on ‘Mango Pickle Down River’), they’re just talking about fishing, it’s not about how the Aborigine people are dying and there’s only a hundred thousand left in a country where there’s twenty million people, it’s just like, ‘This is what we do, and here’s our didgeridoo’.

Do you ever feel like you missed out in not having a more fixed cultural identity?

I think it’s a really weird place that I’m in and I’m constantly confused by it. On the other hand I’ve gone to America and I’m able to say things to Americans that no-one else can really say and they let me, they’ve given me so much leeway to be opinionated about them.

Has that surprised you at all?

It’s weird because when I came out people in England just judged me on whether I was grime or not, they were too busy going ‘is she like Lady Sov or Jentina’, but America just cut through all of that. England didn’t even think about my lyrics and the funny thing is, six months after I put out Sunshowers exactly what I wrote is what happened on the Underground here, and it was like ‘wow, even when that happens they’re still questioning whether I’m real or not’...

(But Britain is) more tolerant, it’s a multi-cultural society and we’re more open to shit... We can come out with an artist who is proud of where they’re from and can talk about those things or raise questions about terrorism where no-one else will stick their neck out, and we can do this just like we gave you a transsexual in the eighties who was singing reggae... it’s like, I’m not that fucking out-of-this world.

MIA is currently touring the UK with the following remaining dates: