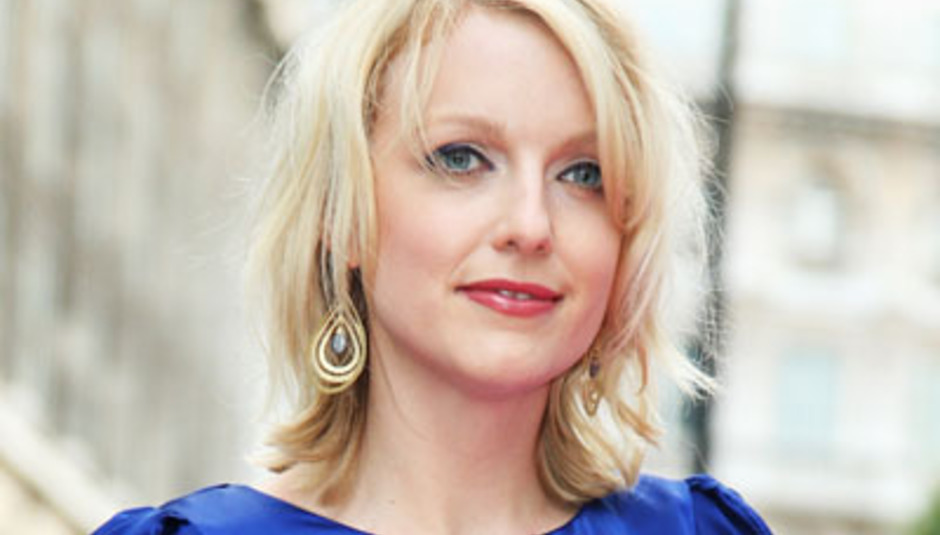 In the run-up to the second series of Orange UnsignedAct, DiS spoke to new judge, Lauren Laverne, and found her delightful as ever. It's a rare pleasure to interview someone who's an expert at talking up the music they love, and Ms. Laverne was as charming as John Peel, 8 years back. Still, she acknowledged that DiS readers (and she's one herself) might be hard to persuade to tune in. We talked Kenickie, being Punka, the greatness of Mogwai, and what a "baby Aidan Moffat" might be doing on the "X Factor for songwriters"...

DiS: Hi Lauren, I last spoke to you ten years ago at the Where It's At club – a friend & I heard you knew Mogwai, so we went over to babble about them, and then thought it would be polite to add that we liked Kenickie, too…!

LL: Mogwai are great – Young Team, especially – you still like them?

DiS: Oh, they've still got it… Seeing as how you're almost ubiquitous across different channels and media, how do people introduce themselves to you, these days?

LL: Well, hopefully I'm not ubiquitous…! Mainly people recognize me off the Culture Show, but a lot of the time people say 'What did I see you on?!' and then you have to explain that 'on telly, you can't actually see out…?' and it could have been any of a number of things.

DiS: [much laughter] You still get a fair number of Kenickie fans coming up to you?

DiS: Thinking of Kenickie's experience [of signing to EMI in 1995], things have changed for unsigned bands, and one aspect of that is the proliferation of programmes like [UnsignedAct]. How much is that affecting the situation, or perhaps helping bands?

LL: It's impossible to compare the times. The last decade has completely changed everything. You might as well say 'Oh, the 1780s – was there more indie music around then?' It's just such a different era. I kind of think that now, the way the internet is affecting music – it's too early to say. Everything's changed, so it's difficult to make a definitive statement…

…but I feel the great thing about it is everyone has their MySpace [page], so that you put your band up there, and then you exist. There's no such thing as [secretive voice] having to seek out a band, or having to wait two weeks for a record to come out… but I kind of think that the other side of it, the flipside of that is that there's so much music out there, it could be a bit bewildering, and it could be bit hard to stand out, really.

[NB – it's true Kenickie were the only good female-led guitar band on a major, but they did prompt a reckless signing spree that gave Melody Maker a chance to laugh at Fluffy for all of five minutes…]

Still, there are a lot of ways to filter the real talent, whether it's a TV-talent show, or a website like Drowned in Sound – and I certainly read Drowned in Sound to check out who's interesting, or what's the next big thing… d'you know what I mean? So, I think, across different media, you take from it what you want, and those things are always useful. [Unsigned Act is] giving you a new perspective, because there's this huge, massive wall of sound, and how do you pick from this morass of music? So, we need a new perspective, and there's your new perspective [offered by the show].

DiS: Given that the show's looking to give a deal to a band who are meant to be commercial, are "lo-fi songs [still] great"? [to quote a lyric from Kenickie's own 'Punka' single] What are the criteria you're looking for [as judges], and could a superficial trashiness count against a band?

LL: Virtuosity has no place in the music I love, and I really don't give a shit about that. Music is all about spirit. Any kind of art is, fundamentally. It's not football. It's not about proficiency. If you can play the best, you can prove that empirically. You score the goals, and that's maths. Maths and music have nothing to do with music… unless you're Kieran Hebden, in which case they can sometimes be good bedfellows. It's about spirit. Take Iggy Pop – can't play, can't sing, never wrote a song with more than 21 words in it – one of the greatest musical pioneers of the century.

DiS: Have you seen anyone acting like Iggy onstage? Does anyone break through the fourth wall, and seem genuinely dangerous and threatening?

I have been amazed. I have been amazed at how good the entries have been this year. Genuinely. People are actually good! [laughs] Like, and I will say – I was amazed and relieved, because some of them can be rubbish.

We've had everything though. We've had this guy who works in Tesco's in Glasgow, and he's like a baby Aidan Moffat… or a baby Malcolm Middleton, actually. You have everyone from him to the most… curvaceous, sexy, big band pin-up girl. There's a Canadian singer who grew up in a commune.

[NB – Lauren seems to be pushing DiS's post-rock buttons with all this talk of Arab Strap and hints about the next Hotel2Tango.]

DiS: Yeah, I was wondering whether you had any information about the demographic of the show?

You've got X Factor – it's very much, blockbuster [television], and it's music for people who don't like music.

We've got [the] 12 o'clock on Sunday [slot], and obviously that's more of a music-literate crowd. At the same time, there are other real pop-music fans.

DiS: Are there any particular ways it tries to break through the cynicism of people who think '"I don't want to watch [a programme] that's like 'something for people who don't like music'", as you put it.

LL: The template is like that… but it's ridiculous to say 'I don't want to listen to something that's in 4/4' – I mean, maybe that works for you if you're in Foals, or something. That kind of attitude is boring. It's no fun. It's [i.e. this is] a fun programme. People should just give it a try. I'm not going to badger anyone! [witchy voice] You should watch it…

DiS: Something that often seems to happen with these shows is that the underdog seems to be the one who's commercially more successful, in the long-run. The one you're rooting for, who falls out much earlier...

LL: The Will Young factor...

LL: Tomorrow [October 29th] we decide the Final 8. I'm not sure, because we're waiting on an e-mail [laughs]. We're not at the stage of establishing who the underdog is. It's difficult because I think, last year, the band who won it were conflicted – having done the show – and they gave an interview to Drowned in Sound going moan-moan-moan! They just felt… conflicted. You know what? I don't give a fuck. I just want someone who can Iggy it up. Someone who can kick it's throat off… That's what music – really great music – is about.

DiS: Have you seen anyone putting their guitars through the amps?

DiS: Yeah, what do you do now? I saw Fuck Buttons the other day, and he was really giving it to his laptop… but it's a laptop?!

LL: It's difficult. You see them standing onstage and – my favourite is when the rest of the band, you'll see them all looking at the laptop like it's a musician, and you want to say Hey – it's not actually a drummer! Just play the sequencer!

DiS: Thinking of the Mercury Prize [also presented by LL], is there any kind of outsider, like Burial?

LL: There isn't any dubstep – I would have liked a bit of dupstep – but the biggest outsider is Baby Malcolm. He's on the Orange Unsigned website. His name is Tommy… ah, Flynn? From Glasgow.

LL: [laughs] I must have been having too good a time there with Amy Winehouse, or something…

He was the best that day, though – no-one had just got up there with a guitar, and played at the audition. He came in, and he was just stupendous.

DiS: On the Belle & Sebastian side, or the Mogwai side?

LL: Neither actually. They're on the quirky Flying Lizards side… or kind of like Fratellis fronted by Josh Homme [QOTSA], but not, like, as annoying. Not "UhUh-Uh, UhUh-Uh…" – cleverer than that.

DiS: Who are the other panellists rooting for?

LL: We're quite harmonious. For Simon [from Universal], taste doesn't come into it. Can he shift this product? If he puts a million quid into it, can he get it back? Alex [James, ex-Blur] is into a lot of classical music, and you never know what he's going to say. He's got an incredible pedigree.

I know what it's like to be up there, and have people not necessarily get it, but at the same time, I've been a TV presenter and a radio DJ for long enough to know what's going to work. Now, I think 'Oh yeah, that's why…!' When I was a kid, I wanted to hear [Kenickie] on John Peel, and then he stopped playing it, and I thought 'Why doesn't John Peel play us anymore? He doesn't like us…' [audibly pouting] But I was only little – I was, like, 18 – and later I realized he doesn't really play bands who are on EMI…! [laughs]

DiS: Are there people who remind you of Kenickie, or of you specifically?

LL: Oh God yeah… it's the weirdest thing. It's the first time I've seen a lot of bands like that since I had a baby, and so I have this third tier, where it's: 'They could be me, but they could also be my child.'

DiS: That was one of the first, saying 'Oh wow, we've seen Lauren Laverne at Where It's At [Soho-based club, and precursor to Trash].'

LL: Look! It's Lauren Laverne, and she's lying on the floor! [much laughing] I'm glad I was the first, that's really nice…

DiS: It looks like I've run over the time, here..

LL: Hmm, what have I got coming up? 50 – 100 words on what I'm reading, for The Times. D'you want to do that for me? On A Tale of Two Cities? [parodic voice] 'It is about the French Revolution. But also about England. It's got fighting in. It is good.'

Lauren is a judge on Orange unsignedAct with Sony Ericsson, Sundays on T4, 12:40pm and also presents a Saturday afternoon show 16.00 -18.00pm on BBC 6Music.