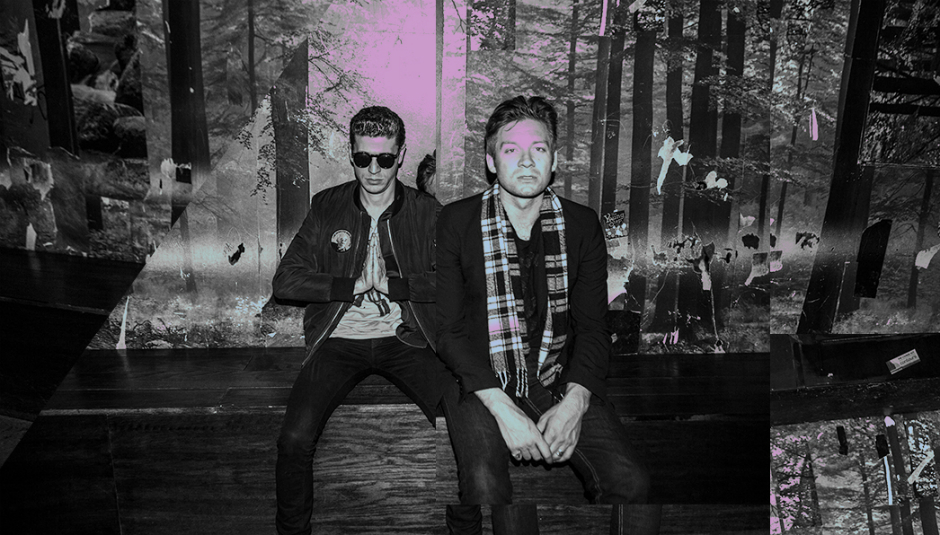 Crocodiles have never really made life easy for themselves. From calling one of their former bands The Plot To Blow Up The Eiffel Tower to picking very public fights with controversial sheriff Joe Arpaio, they’ve blazed exactly the sort of trail that punk bands are supposed to. But their sixth album, Dreamless, is a more focused, nuanced record that abandons the restless fuzz and barely contained anarchy of their earlier records for something altogether more spacious. We asked Brandon Welchez and Charles Rowell to give us the lowdown on the album, which is now available to stream, ahead of its release on 21 October.

Brandon Welchez: Without being arrogant, I think this is one of the best songs I've ever written. The chords, riffs blah blah blah are all pretty decent. I only mention this because it took about 5 minutes to write, which almost never happens to me. I couldn't make my rent one month in NYC so I had to take a shitty truck driving job. With commuting, I was out working about 15 hours a day. It was hell. I was driving around Brooklyn and saw graffiti that said ‘Telepathic Love’. I came home grouchy as fuck, knowing I had to wake up in 6 hours and repeat it all, and combined that emotion with the chaos of my life at the time and the damn thing came together over the course of one glass of wine.

Charles Rowell: Originally the song title was ‘Don't Let The Critics Get You Down’, which was birthed at the Deadly Dragon soundsystem in Manhattan. I went home and wrote this in the early hours of the morning. It seemed too literal to keep the title and main phrase as is, so we changed ‘critics’ to ‘creeps’. Voila. The final song title was something I had written down to use but had no song dedicated to it. It reminded me of a PIL title.

We updated the lyrics the day before tracking the song in Mexico. The words reference literally the only bad experience we've ever had there. Mexico is the best place on earth, so it's not a slight at all. Some friends once took us to an underground goth club in Mexico City. Some asshole skinhead started a fight and, long story short, we had the only bar fight we've ever been in, and it was against a group of Mexican goths in Cure shirts and make up. Big ups to Diego Bustamante for breaking it up and avoiding anybody getting seriously hurt.

BW: I was depressed as hell and so I did the only logical thing to do in that emotional state; put on some disco. I was listening to a Bombers track and wanted to do something in a similar style but also get some of those negative emotions out. The song started as a Bombers sample with me basically rapping about career frustrations, a friend who had killed himself, and my frustration with know-it-alls. It was pretty sparse as a demo but our handsome producer Martin fleshed it out. We said: "Please make it sound like Grandmaster Flash" and he didn't necessarily, but he did something interesting with it.

CR: A love song for my wife, haha. Basically, it's all there in the lyrics. The first year of new love can drive you crazy. Martin, our producer, added some spectacular synth swells to the final mix.

CR: The original sounded nothing like this final mix. It was written as a ballad but had guitars in place of keyboards. The feeling was more like country western. Almost all of us can relate to lyrics about breaking up and having to move out of your lover’s house. Again, Martin brought some sheer heartache with his synth string additions.

BW: This is another song that came together in 5 minutes. I had a brief relationship with a sexy fantasma. She was such a beautiful ghost that I couldn't maintain my cool. And staying cool is still the main rule. I sampled some cumbia percussion and just strummed it out very quickly. Once the chords and melody were in place I just told the tale of my haunting on top.

BW: This was the last song written for the album. Came out literally the day before I left to fly to Mexico to record. It's another song about frustration. The guitar riff I had was lame so we just kept the bass line, added some keys, told the guitar to go to hell and voila. We asked Martin to make it sound like Madness on donuts, and so he sprinkled some powdered sugar over us and punched us in the tummies. What you hear is the result.

CR: I wrote the song about the current state of things in America. Basically how the people who are being oppressed can't even afford the time to protect themselves. They are too busy working, raising families, and trying to stay alive. Meanwhile the bastards in blue and the capitalist terrors are taking swings all day everyday, trying to keep people down.

CR: Again, another break up song. Not much to confess here. It's sort of Stooges meets The Adverts, but with some dirty Bernard Butler influence on the guitar. Our bassist likened it some of our early songs like ‘Hollow Hollow Eyes’ and ‘Billy Speed’. We wanted it to be mega trashy.

Not Even In Your Dreams

BW: I suffer from insomnia and this song came out in 5 frustrated minutes at about 4:13 in the morning. I had been laying awake in bed with the shakes, total anxiety, sweating like a terrier's tongue for hours. I got frustrated and went into the living room and the damn thing just came out easy. The lyrics are about not being able to sleep. My friend Ian Dory called me and tried to get me to go to Gag with him (a nice bar) but I was too tired for fun. I told him I wanted to stay in and work on my song. He told me I was a baby but once he learned he was in the lyrics, all was forgiven, and he ended up buying me a Popsicle for my efforts.

Dreamless is out on 21 October on Zoo Music. For more information about the band and upcoming tour dates, visit their official website.