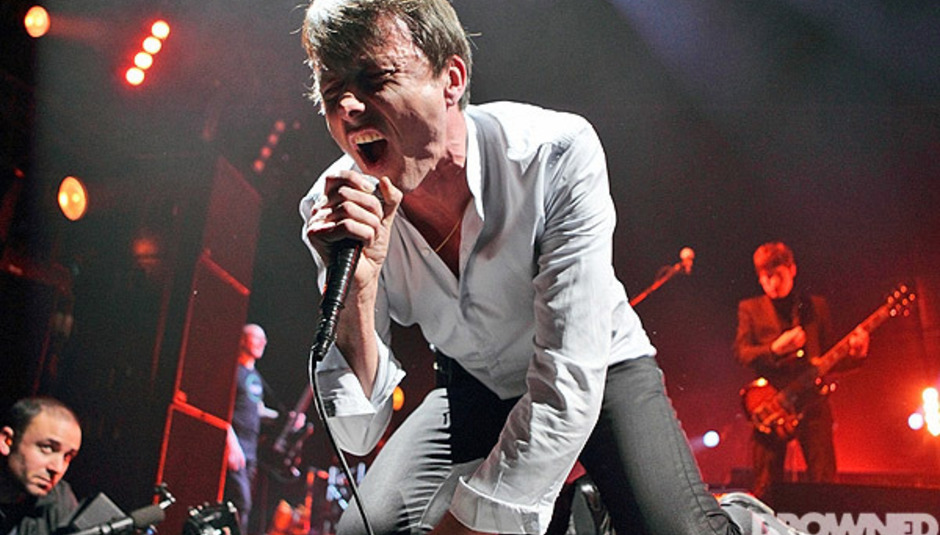 Situated on the south coast between Brighton and Portsmouth, Bognor Regis is one of those sleepy seaside towns that's more renowned as a retirement haven than hip and happening place for the trendy. Serene and picturesque in parts, it's a far cry from those "seaside towns they forgot to burn down" as a certain singer/songwriter once proclaimed three decades ago. It can also lay claim to being the chosen site for the very first Butlin's holiday camp, which opened in the summer of 1960.

It's here where the second installment of Rockaway Beach is taking place after last year's successfully orchestrated inaugural event. With its intimate sized venues, the largest of which (The Centre Stage) holds just 2000, people it creates a setting that breaks down any barriers between band and audience. Indeed, over the course of the weekend, we spot members of Suede playing crazy golf, Killing Joke's Youth checking out the amusement arcades, We Are Scientists speeding around on the go karts and Fews guitarists wandering around clutching cuddly toys they've won on the mechanical grabbers. In many ways, it has a similar feel to those early All Tomorrow's Parties events in Camber Sands. While not wishing to sound overly earnest, its clearly about the music for the majority of the attendees and although the organisers have put together an eclectic line-up celebrating both the past and present, the demographic is one of a more mature nature than your average green field festival.

As opposed to last year, only two stages will house live music this time around, and with a lot of the set times staggered to start when the other stage finishes, clashes are at a minimum meaning its possible to see pretty much every act on the bill should one desire. Not that the other bar areas are redundant for the weekend, as films and Q&A interviews take place with Arab Strap's Aidan Moffat, Killing Joke's Jaz Coleman and Suede video director Roger Sargent on The Skyline stage, along with DJ slots in the adjacent Bar Rosso from numerous incumbents including Telescopes drummer and esteemed live promoter John Lynch.

With proceedings set to start at Friday teatime, DiS arrives on site after a mammoth five-hour journey to find out we've just missed Nottingham slacker rock trio Kagoule. Fortunately, Bill Ryder-Jones is up next and his Pavement-esque ditties prove a soothing introduction to Rockaway Beach's all encompassing, all inclusive jamboree. Over on the Reds (second) Stage, The Wedding Present are delivering a mammoth career-spanning set that literally maps out David Gedge and co's journey from their humble beginnings to the present day. Debut single 'Go Out And Get 'Em Boy' is an early highlight, while most recent 45 'Bear' is also delivered with impeccable aplomb before a near ten minutes long version of 'Take Me!' threatens to take the set beyond its scheduled finishing time.

Upstairs on the Centre Stage, first-night headliners Saint Etienne also turn back the clock in style. Playing their 1991 debut Foxbase Alpha in full, it still sounds as fresh and invigorating as it did upon release a quarter of a century ago. Bringing out the big guns for the encore including a rare live airing for their reinterpretation of The Field Mice's 'Let's Kiss And Make Up', it's a showstopping performance worthy of the bill-topping status they've been afforded and one that can only bode well for the rest of the weekend.

The next day, we're engulfed by diehard Suede fans who actually queue to get into the Centre Stage a full eight-and-a-half hours before their firm favourites take to the stage. Our first venture takes us to the Reds Stage where experimental post-rock trio Eyre Llew are kicking up an almighty storm, their set veering somewhere between the delicate mystique of Sigur Ros and visceral aural bludgeoning of 65daysofstatic, closing number 'Fire Breather' being a particular highlight. London-based trio Desert Mountain Tribe also prove to be a revelation, playing an hour-long set that sees them open with a new - albeit as yet unfinished - song before careering through the best bits of this year's stunning debut Either That Or The Moon.

Back on the Centre Stage, Dean Wareham and Luna's return to the live arena is unsurprisingly met with a large audience. He and his band don't disappoint either, playing a set garnered from their extensive back catalogue although the biggest cheer is reserved for the cover of Galaxie 500's 'Blue Thunder' that proves to be the penultimate number.

Having three number one albums to their name and a legacy that's seen them outlive every genre from grunge to Britpop and beyond, Suede are something of a national institution. Nevertheless, it's something of a massive coup for the organisers to secure such a popular household name, and Suede deliver in style. Playing what could easily be described as THE perfect headline set, all bases are covered from their biggest singles to most revered album tracks and critically acclaimed b-sides. Brett Anderson, 49 last month, leaps and bounds around the stage like a hyperactive teenager. Never dropping a note, seemingly never out of breath. Opener 'Sabotage' reminds us why the current rejuvenated incarnation ranks alongside their best, as does a stirring rendition of 'It Starts And Ends With You' from Night Thoughts predecessor Bloodsports. Elsewhere, 'By The Sea' and 'The Next Life' are reworked into what could be classed as a quasi-operatic medley, while 'So Young' and 'Metal Mickey' offer timely reminders of why we fell in love with this band in the first place. On this form, they're simply untouchable and more importantly still as relevant as ever.

The next morning, DiS heads to the seafront in the vain hope of clearing the previous night's hangover. On returning to the festival, Mancunian one man band Joe Oxley aka TVAM is creating a frenzy of his own. Elements of punk, electronica and thrash metal collide at random points, but its closing piece and new single 'Total Immersion' that really shines through. Coming on like Add N To X covering Suicide, it's the highlight of a set that leaves us foaming at the mouth in anticipation of next year's debut long player. Liverpudlian chanteuse Jane Weaver also renders Sunday afternoon pleasantly soothing. 'Mission Desire' oozes class from every dreamy pore while 'Don't Take My Soul' could be Kate Bush duetting with Stereolab in a parallel universe. Newly signed to Fire Records, watch this space for her next chapter.

Malmo post-punks Fews have been on tour for what seems like the entire duration of 2016. Nevertheless, it's served them well having won them a lot of followers along the way, and the Reds Stage is packed to the rafters for their Sunday teatime slot. Playing a set almost entirely lifted from May's debut Means, their Interpol-meets-A Place To Bury Strangers schtick is a joy to behold. Fast and furious numbers like 'Drinking Games' and '10 Things' give way to the more reflective 'Keep On Telling Myself'. Paeans to Zlatan Ibrahimovic ('Zlatan') and the girl of one's dreams ('The Queen') follow. The one new song they play, 'La Guardia', bears all the hallmarks of their first record, but from a more angular perspective. They're another of this weekend's highlights and a band whose star is set to shine well into the future.

As Sunday and this year's Rockaway Beach draws to a close, it's a case of anything Suede can do, Killing Joke can do better, and they at least match them when it comes to delivering yet another impeccable headline set in what's been a weekend blessed with them. With such an impressive body of work and extensive back catalogue to choose from, most bands would probably balk under the strain at having to pick out what to play in such salubrious surroundings. Not Killing Joke. Instead they go for the jugular, opening with biggest hit 'Love Like Blood', and the other big 45 from their Night Time era, 'Eighties'. For the next hour and a half, a masterclass in industrial, dub-fuelled post-punk ensues as the reggae vibes of 'Turn To Red' give way to the proto-metal of 'I Am The Virus' and more. It's a fitting way to end what's fast becoming one of the UK festival calendar's most rewarding events, and even though we troop downstairs to catch Faris Badwan's surreal take on Cyndi Lauper's 'Girls Just Want To Have Fun' during Cat's Eyes set, our minds are firmly fixated on the intense barrage executed by Jaz Coleman and co earlier.

The Friday Fangasm: Script Of The Bri...