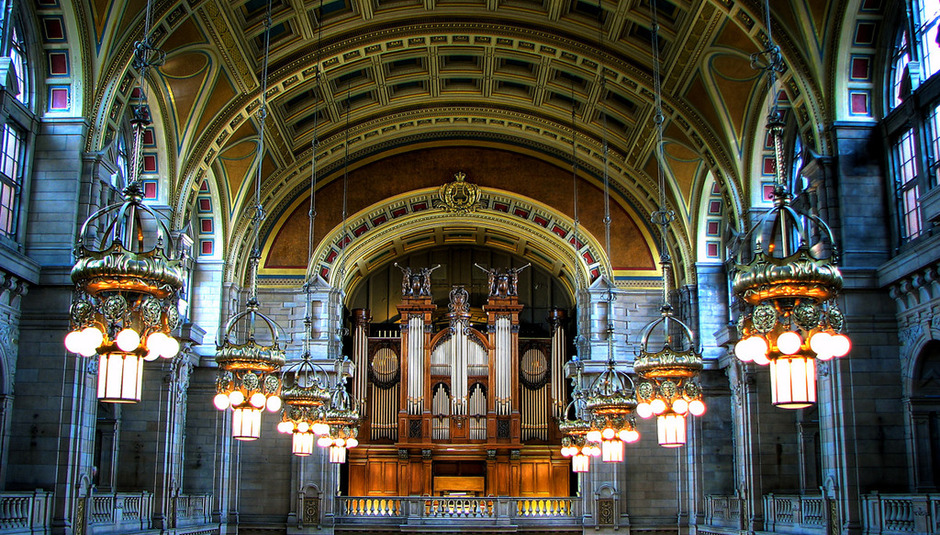 To celebrate the release of their 9th album, Girls in Peacetime Want to Dance (streaming over on NPR here), Belle and Sebastian have kindly agreed to guest edit the site.

Bookmark this page, because coming up this week we have incredibly in-depth interviews with the band (including Meredith Graves from Perfect Pussy in conversation with Stuart Murdoch!), their track by track guide to the album and a little surprise. Before all of that, we asked each band member to recommend their favourite places in Glasgow, and here is what came back...

Chris Geddes: The first neighbourhood I lived in when I moved to town in the early nineties, at that time consisting mostly of fast food places, old men's boozers and late night shops. Murphy's Pakora bar was was the star attraction, with their famous haggis version of the spicy fried snack.

Some things have remained constant, GG Brothers still sell a varied selection of fine wines and foul alcopops from behind their metal bars, but many of the pubs and takeaways have given way to new places. Gastropubs and style bars abound, there's a posh sandwich shop in Piece and healthier options at Roots and Fruits, and the Soul Barber Room offer a fine soundtrack to your short back and sides. It's also become a bit of a hub for the music scene, as the Green Door studio in the Hidden Lane has been where new bands like Golden Teacher and Casual Sex have recorded their recent records.

Stevie Jackson: Monorail shares a building with Mono bar and venue, King Street Glasgow. Delve into the best record shop in Glasgow, all the interesting new releases, reissues, fabulous vinyl including 45's, friendly informative staff including a Pop Legend or two standing there with advice and recomendations. Place is decked out with a lot of love.....and a veggie burger and a glass of ethical beer awaits you on the other side of the glass partition. Through these doors lies a righteous world.

Stuart Murdoch: One of my favourite places in Glasgow is the Kelvingrove Art Gallery And Museum (pictured, above). There's nothing too remarkable or internationally 'important' about it. Just a warm and beautifully ornate sandstone castle, built when Glasgow was the second city of the Victoria's British Empire.

I've gone there on and off, on rainy sundays and sunny tuesdays, for the past 30 years. Now we take our wee boy there, and it's his perfect place to run around and explore. He loves the stuffed elephants and the Spitfire hanging from the ceiling, though he's a little worried about the velociraptors.

When i get a spare minute i like to drift around the permanent collection, The Glasgow Boys, The Colourists, the tale-end Impressionists. And i inevitably drift up to see Dali's masterpiece "Christ of Saint John Of The Cross" - Glasgow's best known painting, some would say a talisman for the city. I, of course, would agree with them. So it's cloistered up in Kelvingrove, and we protect and admire it like a pearl in a very fine shell.

Richard Colburn: The area I live in is called Hyndland, which is located in the west end of Glasgow. It's made up several streets with beautiful terraced tenements dating back to the late 19th century. Before then it was a farm with a church and a hospital. These days it boasts several good restaurants, independent boutiques, a couple of pubs, delis, newsagents, estate agents, etc. But, my absolute favourite place is the local butchers.

James Allen has had a butcher shop in the area for decades. The current owners- Morton and Steven, Father and Son team- have owned the business for the last 11 years. They're the sentinels of the local area. They know everything that's going on. If you're illegally parked, they'll either phone you or speak to the traffic warden to say you won't be long. I often hand house keys in for guests to pick up. They have a who's who of clientele from actors, politicians, musicians, artists, poets, etc, and they always want to find out what you're up to so a visit to the butcher's can take a little while. It's a real social hub of the area. Really old school. They also sell award winning food and make everything on site from pies to gourmet sausages to stovies and everything in between. They always go out of their way to say hello. It's a bit of a rarity these days. They're there from 5am till 6pm and it's always reassuring when you see the light on in early morning in the depths of winter. It's like a little lighthouse that never goes out. I hope the light's on for decades to come.

(on a Monday evening, especially)

Sarah Martin: A certain faction within the band enjoys nothing more than a pub quiz, and there is no better quiz than one hosted by Craig Steel. A couple of years back Craig and another couple of friends acquired their very own pub, just round the corner from Kelvinhall underground on Dowanhill Street, and we had a pretty good winning streak, up until Stuart's son was born. We need to get back to it. Maybe this will be our year.

(The Sparkle Horse is good at other times of the week, too.)

Bob Kildea: The Battlefield Rest in the Southside of Glasgow, originally used as a resting and courting place for travellers, was built in 1915 and is one of the only remaining tram shelters in Scotland. It fell into disrepair and was marked for demolition in 1990 but was saved by a petition from local residents.

The distinctive clock tower which housed the original newspaper kiosk was the only part of the building intact when sympathetic renovation using original materials started in the early 1990s.

It is now a popular Italian restaurant, and one in which the band gather with our families and friends to mark special occasions- no doubt doing so again in this, its centenary year.

Girls In Peacetime Want To Dance is released on January 19th. Pre-order your copy here. You will find all of the B&S DiS takeover compiled here.

1) 'The Party Line' named DiS single of the week plus a B&S best of playlist
2) Los Campesino's guide to Cardiff
3) Everything Everything's guide to Manchester
4) Blood Red Shoes' guide to Brighton
5) Metric's guides to Buenos Aires, Toronto, and Oakland.
6) The Twilight Sad's guide to Kilsyth and Banton
7) Musician's Guide to Eating in London
8) British Sea Power's trip to Mull