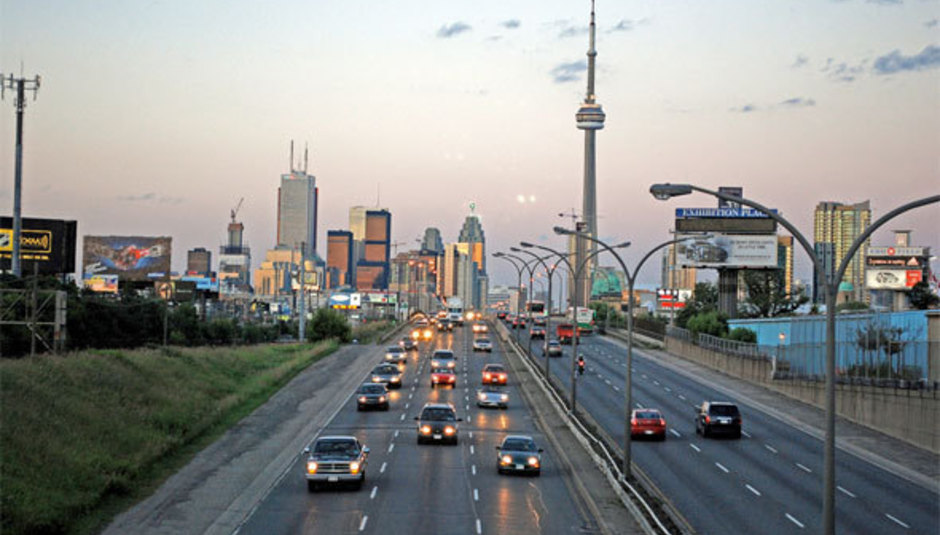 Metric have lived and spent a lot of time in some of the hippest cities in the world, in fact, they're one of the most city-shifting, transient bands we've ever met. Each day this week they're going to share their favourite things about each city they've lived in or visited. Next up is the bands guitarist Jimmy Shaw, walking you through the city the band are currently most synonymous with: Toronto.

I was born in London England, that's right. But... Toronto is the city I grew up in. The city I loved as a kid to roam around in, unobstructed by adults and their worries of big city violence and the awaiting dangers for kids to fall into. The city I would perplexedly stare at my parents as a teenager wondering, why here? What must of happened in the seventies that this was cool? The city that years later I would take refuge in while a second term of W's 'administration' wreaked havoc on the world. The city I still call home, when there's time to go to one. I live in a small radius here in Toronto. It's not a small city, but more of a big town. There are literally miles and miles of neighborhoods that you, dear DiS readers will never go to, nor even need to know of their existence. On the other hand, my hood can be down right utopian for a modern day city. So sit back and enjoy what would be you're late night experiment with Expedia. A 24-hour trip to Jimmy Shaw's Toronto...

The first thing your gonna do when you get here is drop of your bags at the hotel, The Gladstone (1214 Queen Street West) and throw some water on your face. Look at yourself in the mirror, apply some lip balm and head out to get some food, you're starving because you refuse to eat airplane food, because airplane food is not food.

Now, Toronto is one of the most multicultural cities in the world. The nationalities that exist here don't always make the effort to 'melt in the pot' like in other large cities but rather they seem to stay within their own cultures. This does wonders for its cuisine. You're gonna head West into the culturally rich part of Toronto known as Parkdale. Predominantly Jamaican or West Indian, this neighborhood is spotted with thick rimmed glasses wearing hip kids. Possibly riding fixed gear bikes and stopping in at the Vice offices for a cigarette. You're gonna stroll past that to the Bajan classic that is Bacchus Roti Shop (1376 Queen Street West). A roti is like a large burrito of sorts wrapped in flat lentil bread and filled with amazing curries, such as jerk chicken or spicy shrimp stew. Get the hot sauce on the side, Scotch Bonnets dont mess around! And finish it with a large piece of coconut cream pie. This is called laying a base for what's to come. Now you are full happy and exhausted.

A few hours pass and you wake up in your room with a raging urge to go have a drink. I personally think it's a great idea. Ontario has some pretty stupid laws about how and where to buy booze, so I suggest you stick to the bars and don't wait till after 9pm to saunter out and get a bottle of wine. You'll have to saunter to Montreal.

First you're gonna dig to the bottom of your bag for some flannel and head over to the Dakota Tavern (249 Ossington Avenue). Say hi to Maggie and have some tequila. There will be a band playing and if you don't like a song or two, jump across the street to the Communists Daughter (1149 Dundas St W). By now you've met Tara and by now you're drunk. Well done. There's probably a bunch of 22 year olds in band that sounds like Broken Social Scene (kinda) playing in the Underground at the Drake Hotel (1150 Queen St W). You can walk, but why would you, you're hammered! Take that taxi to the corner of Queen and Beaconsfield. Try and sneak in the side door - if there's a huge line up, it usually works. The band sort of does it for you but no one in the band has the charm of the real Kevin Drew and you've got it in your head that for some reason you really wanna go dancing. You're going to Wrongbar. Yup, regret loves company. It's just down the street at 1279 Queen Street West. When you get back to the Gladstone, you might want to entertain checking in at the bar there too, cuz at this point you just might be wasted enough to Karaoke a rousing chorus of 'Total Eclipse Of The Heart'. Its a good choice and I can't predict what might happen to you if you succeed in hitting the high notes.

Now remember travelers, I know you're drunk and spinning but remember to put the do not disturb sign on your door. Being woken up by the maid who screams at your half clothed body with your eyes crusted together at 8:15 am is not cool - for the maid!

11:55 am happens and it hurts. You swallow a whole bottle of Fiji water ($4.99) and with it the travel pack of Advil and then realize that you lost your jacket and have a huge tear in your jeans. Damn you Toronto!! The first place you wanna go is Sydneys (795 Queen Street West) to get some new duds. Bring your Visa and thank God the pound is worth way more than the Canadian dollar. And maybe hit up Delphic (706 Queen Street West) across the street for a Lindeberg hoodie and some glasses so you can hide behind them for the rest of the afternoon. Now you're hungry and need a coffee. Get that new style of yours into a taxicab and head up to Kensington Market. Ideal Coffee (84 Nassau Street) has the stuff. It's serious coffee and not for the faint of heart. Today, it's you're best friend. From here you just walk around and there are a multitude of food options to satisfy anything. Jumbo Peruvian Empanadas (245 Augusta Ave) for just what the name says, and Urban Herbivore (64 Oxford Street) just up the street for a healthy and huge tofu sandwich. There is just too much to list all within a block or two, you'll just end up walking around nice and easy, with a small grin starting to grow and slowly you'll find what just you want. Personally I would hit up El Trompo Taco Bar (277 Augusta Avenue) and have some chicken tacos and a corona to really wrap up the afternoon experience.

Your twenty four hours has come to an end and you're ready to get on that red eye back to London. Did you have fun? Of course you did. Would you do it again? Hard to say. Maybe next time you'll try Orbitz.