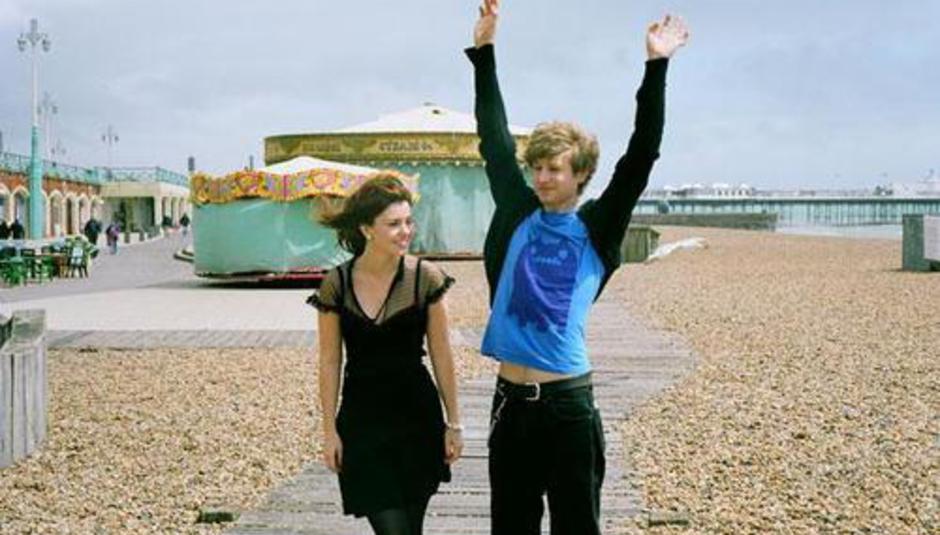 Ahead of their hometown headline show on the DiS stage at the Great Escape, DiS asked Steven from Blood Red Shoes to share his local knowledge and suggest some places to visit during the weekend's festivities.

there are two places we always end up getting coffee. THE KOMEDIA has great coffee, it's also a music/comedy/arts sorta venue which we prefer to play because it's the same size as the concorde 2 but less like a boys' club. we also recently discovered a place on trafalgar street called 33 which laura-mary swears is definitely THE best coffee in brighton now. they're both very near each other in an area called the north laines which is right near the train station.

this place is where we kept going to buy film and ask them loads of questions about lomo cameras and other cheap but interesting-looking film cameras. the people here are cool and helpful and if, like me, you don't know shit about photography they're able to show you how to load a simple camera without being snobby which is pretty decent. it's on a road called church street. we also always use the same developing place, called COLOURSTREAM which is on st james' street in kemptown - another set of good folks who are happy to help explain things and also do really good film processing. they're happy to do adjustments on the colours and saturation etc when you get things developed so you can get some interesting results.

this is a studio complex on lewes road, a little out of town on the way to the 2 big universities. it houses 2 recording studios and load of hourly rehearsal spaces. we rent our own room there and the people really look after us. they have some wicked fancy dress parties like on new year's eve when they set up 2 practice rooms as live venues, threw an awning up outside and had a load of bands and dj's going plus free cocktails and bbq served by people dressed as zombies. so it's worth making friends with them. they also take a decent amount of pride in their rehearsal facility and have better equipment than anywhere I've used in town.

there are a bunch of new vintage shops opening up - beyond retro just expanded down here from east london, probably because there are so many art students here eh. but there are a couple of other places too, i've only bought a couple of bits in them but laura-mary loves them. again, these are around the north laines area. they're good if you want to find old led zep t-shirts.

we are both complete foodies, i think that's something that happens to bands on tour - you can't cook for yourself and you have to eat out almost every night. well, apart from the bands who just seem to always eat subway that is. but we got really into decent food, in order that we stay alive, and there are some good places in brighton. CASA DON CARLOS in the lanes (not the north laines, this is a different set of weird shops) is an amazing tapas place and probably my favourite restaurant in brighton. it's also very reasonably-priced for this part of england (brighton is pretty expensive generally). they do an awesome chorizo don carlos where the dude comes over and throws flaming rum all over your food.

another great bite is a place opposite actually, called RIDDLE AND FINNS, which is an expensive fish restaurant usually full of suited dudes. but if you fancy splashing out and you're into seafood it's absolutely incredible, fresh fish caught that morning just cooked simply and thrown on a plate. totally proper.

for a cheap bite there are two BAGELMAN places in town, one on ship street and one on bond street, get a cheesy melt bagel they rule.

i already mentioned the komedia, but there are some other decent places. for some reason brighton, despite being a town full of creative arty little muso bastards, actually doesn't have that many good venues. THE ALBERT is great, on trafalgar st dead near the train station - we recently saw nightmarchers there and they were amazing. it's a tiny place so the atmosphere can be really good. THE FREEBUTT on phoenix place is where i used to work as a sound guy, it's changed a lot which i feel sad about but the people who run it these days are really good types and into putting on as much interesting underground stuff as possible which is very hard given everyone is broke and a lot of that music is hard to sell tickets for. it has cheap deals on beer and a good bar above it called the penthouse where you can usually find half our mates DJing.

stay away from gigs at audio or coalition, those places suck, they're not built for bands to play and always ruin the sound and the vibe of a show. THE COWLEY CLUB is a venue but more important an all-round cultural centre, it's run by an anarchist co-operative and has all kinds of shows, club nights, protest meetings and more. it sells books and has lots of free courses, for example english courses for asylum seekers or meetings about breaking up BNP rallies or electoral plans. it's also a super-cheap vegan cafe in the daytime. it rules basically, and pretty much summarizes what i like about brighton.

brighton is fortunate in that it has 5 important independent shops covering different bases. THE PUNKER BUNKER and EDGEWORLD are the two i used to spend most of my money in, the former covering all sorts of DIY-scene punk stuff from fugazi to against me or capdown, the latter is the place to head if you want your oxbow vinyl or bardo pond. then there's ROUNDER and RESIDENT which both stock mainstream stuff as well as more underground music, always at better prices though, and they always have a good stack of new 7" releases. they are also good places to get yr gig tickets at better prices than the online retailers who completely fleece music fans. lastly if you're into some old original rolling stones vinyl or some pysch-rock freakout stuff then BORDERLINE on gardner street will sort you out.

is exactly what you think and sells the best sausages you can find. all kinds of gourmet stuff in there. locally-sourced and really good quality. they've been selling steak recently which i can also highly recommend. as you can tell, blood red shoes is not even remotely vegetarian, which actually makes us the minority in a town like brighton.

this is where we spend most of the time on the few days of the year we're not on tour or somewhere else doing BAND STUFF. the BEE'S MOUTH on western road towards hove is great, and serves the only beer in the world that i actually like (because it tastes like ribena probably), a belgian cherry beer called KRIEK. plus also cocktails, free jazz bands playing in the corner and a generally low-lit red-walled sleazy twin peaks sort of vibe to it. always full of musicians this place. down the road is a place called THE LION AND LOBSTER which is a beautiful pub run by the people who own whelans in dublin, it also serves really good pizza until about 3am. then the HAND IN HAND is up around an area called kemptown - which is generally worth checking out anyway as it's pretty cool - this place is tiny and brews its own ales in the basement. it also sells cheap pies which are freshly made by a local muso, the thai vegetable ones are ace.

i'm gonna end this with a quick tip for anyone who's come to town with one of the 2 big uni's here. DONT STAY ON CAMPUS because it ain't really brighton. you are, in fact, way out of town and not experiencing anything brighton has to offer so get on the BIG LEMON eco-friendly vegetable-oil fuelled bus and get into town. i meet loads of students who take a year to figure this out. you're missing out on a town with a rich history of insane, hippy, lefty, drug maniac, eco-warrior, nocturnal, organic vege, oh-so-bohemian ridiculousness.