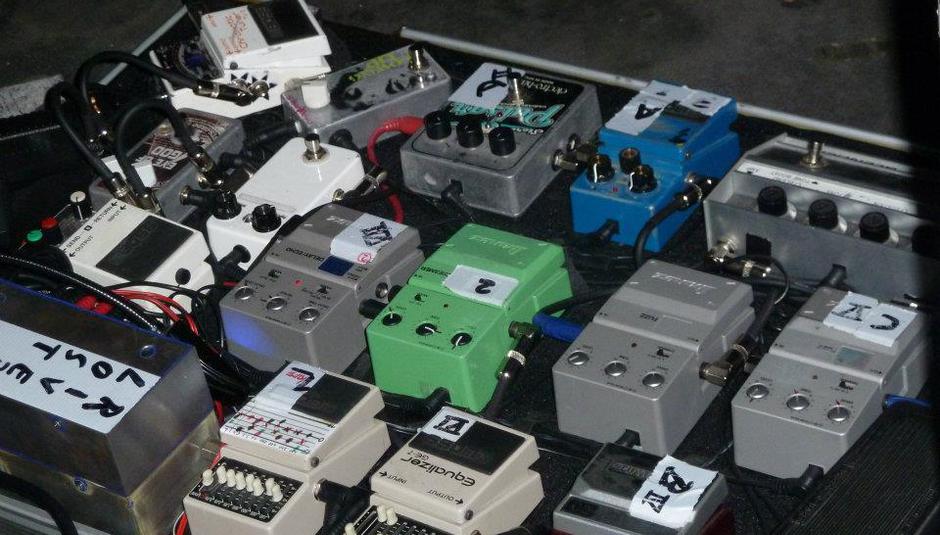 Once upon a time, we here at Drownedinsound used to pen a column that went by the name of Some Velvet Mourning. It stretched to four pieces, here, here, here, and here. Inspired by all things loud, heavy, dreamy and fuelled by reverb, distortion and feedback, we ran the column intermittently for a few months. And then stopped. Because the sounds that inspired the articles in the first place have continued to filter out of the underground and occasionally (is that really Fearne Cotton playing M83 on daytime Radio 1?) even infiltrated the mainstream.

Already this year there's been excellent releases from the likes of School Of Seven Bells, The Megaphonic Thrift and fellow Norwegian outfit 120 Days. Add to that tasters for what's in store from established artists such as A Place Of Strangers and The Brian Jonestown Massacre alongside blistering introductions from relative newcomers The Lost Rivers, Culkin and The Naturals and you can see why we're already digging the earplugs out and dusting down the pedals. Internet radio stations such as the awesome Strangeways Radio and blogs like When The Sun Hits and Shoegazer Alive aren't just celebrating the scene that allegedly celebrates itself, they're introducing a whole new generation to a genre that continues to exceed all expectations.

Not to mention the recent reformation and subsequent live shows from The Jesus & Mary Chain and the belated arrival next month of My Bloody Valentine's remastered Loveless and Isn't Anything packages along with a compilation of EP tracks and previously unreleased rarities. Oh, and did we mention M83 are playlisted on daytime radio? We did? OK...

Here then, with the second quarter of 2012 already underway, we bring you Some Velvet Mixtape, 35 of the finest artists and songs drenched in all of the above and more that have been keeping us awake at night (and day) these past few months.

Kicking off with Brooklyn's A Place To Bury Strangers, undoubtedly the leading lights of the shoegaze/noise scene at this present moment in time. With third long player, Worship, due out at the end of June, and a European tour that's about to begin any day now, to say their return has been welcomed with open arms would be something of an understatement. Here's the first taster of what to expect from their new record.

Recent challengers to their throne and serious contenders for 2012's coveted album of the year title are German trio The Lost Rivers. Their recent show at Brixton's Windmill had to be seen (and heard) to be believed, resulting in them hurriedly persuaded to return also in June for a one-off show with shoegaze legends The Telescopes. Here's forthcoming single 'New Light'.

Also on the same bill that evening were Doncaster's 93MillionMilesFromThe Sun and London's own The Electric Mainline. The former's Northern Sky long player proved to be one a highlight of 2011, and their current single, 'Before You Leave' is taken from it.

Of course there's nothing we love here at DiS than discovering new bands, so without further ado here's a selection of some that have been regular fixtures on the stereo recently.

Whirr hail from San Francisco and released their debut long player Pipe Dreams last month. 'Hide' is taken from the b-side of forthcoming single 'Home Is Where My Head Is'.

Bristol based foursome The Naturals sound like an underwater Foals reared on a diet of Kevin Shields and Mercury Rev. Current single 'Concrete Sea' is one of the finest pieces of music we've heard all year. I'm sure you'll agree.

Wellington's Glass Vaults released their Into Clear EP late last year. However, it's rarely been off the stereo since.

Fairewell's Poor, Poor Grendel was a record that sadly got buried amidst the end of year rush. Neither ignored nor forgotten, here's the Team Ghost remix of 'Wild Meadow/I've Been Locked Away' from said album.

Tokyo's Taffy just happen to be the latest signings to respected independent Club AC30. Album Caramel Sunset is out in May. Here's a taster of things to come.

Staying in Japan, Sugardrop are another band who've been catching our ears, and here's their Urusei Yatsura does Dinosaur Jr '1,2,3,4,5'.

Meanwhile Head On The Sofa originate from Sendai, and released their gorgeously quaint Happy EP in January of this year.

The Soft are three teenagers from Bury St Edmunds who make dazzling electronic soundscapes with consummate ease. See them on the DiS Stage at this year's Great Escape. Here's 'Tropisms'.

We've been loving Palm Beach's the band in heaven ever since last summer's 'Summer Bummer' EP landed in our inboxes. Now they've gone and made a video for new single 'Sleazy Dreams'. Check it out.

Brighton's Sparrow remind us of Cranes or Throwing Muses. Debut single 'Beautiful' is out next month and it's ace!

Staying in the south but heading towards Londinium, capital based duo Severin's potent mix of industrial beats, visceral noise and saccharine vocals take us back to the days of Toni Halliday and Dean Garcia - aka Curve. Their first Rory Attwell produced release, the 'Everything Breaks' EP came out last week.

Fellow Londoners Toy may have members with a chequered past in a certain other band who shall remain nameless, but their first two releases for Heavenly Records have been pretty astonishing. Here's the latest, 'Motoring'.

In an ideal world, Manchester's Daniel Land And The Modern Painters would be supporting The Stone Roses at their Heaton Park shindigs. Recently signed to Club AC30, long awaited second album The Space Between Us is out in May. Here's the SPC ECO remix of forthcoming single 'Eyes Wide Shut'.

Athens quartet Pacific UV have been around a while. Third long player Weekends came out last week on Mazarine Records and is frankly wonderful.

Swedish four-piece Culkin evoke the spirit of Dinosaur Jr and Sonic Youth into one giant Scandinavian ball of energy. Debut album Several Sundays is out this month. Here's 'Glow', taken from said record.

Moving across the fjords to Norway, regular readers of DiS will already have realised we've developed a soft spot for The Megaphonic Thrift recently. And here's why.

Fellow countrymen 120 Days have been creating sonic experiments of their own for a while now. Current album II sees them take solace on the dancefloor, albeit in tripper's corner, and the skyscraping 'Dahle Disco' undoubtedly represents their most epic ten minutes to date.

Italian trio Sea Dweller's Signs Of A Perfect Disaster is another of this year's finest releases to date. Available on "acid yellow" vinyl, it's worth seven euros of anyone's money.

Moving a little closer to home. As in Nottingham, the place where I live, are Spotlight Kid. We haven't stopped listening to 'Disaster Tourist' for over six months now and things are unlikely to change for the foreseeable. Here's a video they made last year for 'Forget Yourself In Me'.

Fellow East Midlanders Cult Of Dom Keller too their Loop inspired psyche rock across the pond to Austin's Psychefest last year, and their 3rd EP has just hit the shops as we speak.

Heligoland have been treading the boards a good few years. However, that hasn't stopped them releasing consistently great music, and January's Bethmale EP continues that trend in astute fashion.

Long time DiS favourites Sennen also have a new record out this month. Lost Harmony was produced by David Allen, previously renowned for his work with The Cure, and is an absolute corker for sure. Here's lead single 'Vultures'.

Reading's Tripwires have also been hotly tipped for a while now, and here's why. This is 'Emeralds', which harks back to the home counties days of old when Ride and Chapterhouse ruled the roost.

Crossing over the Atlantic again, Brooklyn's Beach Fossils take "dreamy" to its most pedantic state. With a new album imminent, here's 'Lessons', taken from their most recent seven inch on Captured Tracks.

Denver's Gauntlet Hair mix horrorshow psychedelia and lo-fi folk with devastating results. This is 'Lights Out', which sounds like The Beach Boys on prescription mushrooms. If that were possible.

Sealight have several roots in Australia and a base in Paris. Their haunting Dead Letters EP came out late last year, and is well worth making the effort to track down.

London's Colours released the mysterious 'Drip Haze' at the turn of the year. Think Butthole Surfers, The Mothers Of Invention and Can. Seriously good in other words.

Recent signings to Sonic Cathedral are Baltimore's Dead Mellotron. Third long player Glitter gets its release cearly next month, and here's a home made video - as in someone unbeknown to the band or label made it at home - of 'I Remember Everything' off Glitter's self-titled predecessor.

One of this year's most revered records on DiS and indeed many other publications would be Ghostory by School Of Seven Bells. This is 'Lafaye', the first single off the album released in February.

Finally, we can't sign off without mentioning the forthcoming release from The Brian Jonestown Massacre, Aufheben. Out next month via Cargo Records and a distinguished return to form in many ways, Anton Newcombe has been busy sharing videos across the net in recent weeks such as this one, 'I Wanna Hold Your Other Hand'.

Oh, and did we mention M83 have been playlisted on daytime radio...

In Photos: The Rifles @ Shepherds Bus...