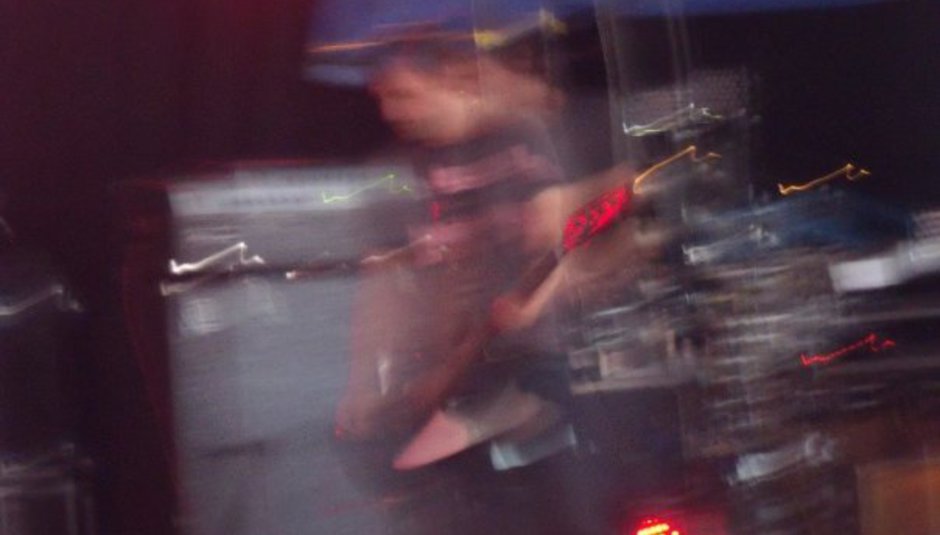 Has the world gone completely ga-ga for shoegaze? Over the next couple of weeks it will feel like it has. Having literally spent the past six months counting down the days at the prospect of seeing My Bloody Valentine, Sonic Youth, Swervedriver et al thirty-six times over at this year's ATP: The Nightmare Before Christmas event at Minehead, the wonderful Club AC30 only go and announce the three-day Reverence series of shows at London's ICA venue. Featuring The Pains Of Being Pure At Heart, Swervedriver (again), and the return of one-time scene poster boys Chapterhouse - not to mention a DJ set on the Friday from yours truly - those of us with a serious disposition for all things echo-driven, reverb-laden and distorted by feedback really have been spoilt. Talk about Christmas coming early...

But enough of what's to come; the final Some Velvet Mourning of 2009 is all about those records that have somehow slipped the net or escaped the radar for whatever reason. Each and every one of them though is a must-own for anyone remotely interested in this kind of thing... Norwegian outfit Maribel could soundtrack the most hallucinogenic dream or hellish nightmare at the flick of a switch. Although released as far back as May, the likes of 'Deflowers' and 'Siamese Eyes' have rarely been off the SVM turntable, fusing Loveless-spawned sound collages with luscious boy/girl harmonies that recall such hallowed combinations as Butcher & Shields or Goswell & Halstead. At times intrinsically mellow, at others outlandishly buoyant, Maribel undoubtedly possess the potential to follow in the footsteps of fellow compatriots in noisemaking Serena Maneesh and Magenta.
(MySpace) Having raved about the excellent Daniel Land & The Modern Painters since first seeing him open for School Of Seven Bells at a Sonic Cathedral night last year, SVM has followed his progress with great intent. Thankfully, his latest offering, debut long player Love Songs For The Chemical Generation does anything but disappoint. Capturing both the plaintive side of Land's songwriting ('Benjamin's Room', 'Love Lies Bleeding') with a dazzling array of atmospheric, mesmerising excursions ('Codeine', 'Glitterball'), Love Songs... is a pulsating record that serves up a whole range of twists and turns with every subsequent listen. (MySpace) Having spent the past two decades playing with the likes of The Charlottes, Slowdive and Televise, Simon Scott could be considered something of a veteran in musical circles. Nevertheless, Navigare, his first collection of purely solo works proves to be something of a voyage of discovery. Among its ambient textures and drone-inspired passages there's a trove of treasures to be unearthed such as 'Derelict Days', which in a parallel universe would form the ideal score to a funeral scene from a Ridley Scott flick, or 'Under Crumbling Skies', which transforms the blueprint created by Brian Eno and mastered by Ulrich Schnauss into something more otherworldly and futuristic. While the logical option would be to file Navigare under "Mood Music", the most fitting tribute SVM can pay is that this record simply creates its own state of mind making the job of the listener in following suit that bit easier.
(MySpace) As if Glasgow hasn't spoiled us enough these past few years with its assembled cortege of musical delights, along comes another worthy addition to that list in the shape of There Will Be Fireworks. While comparisons to the likes of Arab Strap and The Twilight Sad are perhaps inevitable, we at SVM prefer to concentrate on the wavering improvisation of 'Columbian Fireworks' which reminds us of the late and lamented Los Planetos Del Agua, or the wavering, mournful 'Midfield Maestro', which delivers on all counts sonically and lyrically.'A Kind Of Furnace' makes this self-titled debut worth the admission fee alone, its brewing intensity skewered by a latent ambition that can only be the work of four supremely dedicated obsessives to the cause of their labours. Somewhat bizarrely, the band also list Kings Of Leon as one of their influences. No, us neither...thankfully.
(MySpace)
Video:There Will Be Fireworks - 'Foreign Thoughts' Operating somewhere between the dense landscapes of Hammock and the intuitive experimentalism of Flying Saucer Attack, Ryan Field aka Project Skyward is something of a law unto himself. Which can only be a good thing if Moved By Opposing Forces, the Brooklynite's inaugural release for long-established indie Rocket Girl is anything to go by. Combining instrumental pieces with elegiac, wistful asides such as the transmogrified 'Memories Just Wash Away', Moved By Opposing Forces is a diverse collection of ideas and sounds that do justice to recent comparisons with both The Postal Service and M83.
(MySpace) Although better known as the frontman for Brighton's Air Formation, Matt Bartram has actually been making music in his own right for the past two years. Last year's low-key release Arundel proved to be a seminal introduction which combined ambient melancholy with distilled electronica and Left To Memory, released earlier this month, takes his panoramic musical vision one step further. Take the album's centrepiece, 'Twelve String Loop', for example; a glorious washed-out slab of voluptuous guitar ambience that features Christian Savill, formerly of Slowdive. Its angelic sounds join the record together like heavenly rivets, while the compellingly claustrophobic 'Another Wave' adds another string to Bartram's already over-populated bow.
(MySpace) Despite being named after a gin-enhanced cocktail, this Icelandic six-piece could be Reykjavik's answer to The Brian Jonestown Massacre. Already infamous in their homeland, album number four Perversity, Desperation And Death is an ungainly mix of downbeat rock and roll ('I Believe', 'Make Us A Fire', 'Demoniac') to beat-driven pomp rock ('Martian Arts') that recalls Automatic-era Mary Chain, The Raveonettes circa Whip It On and the aforementioned BJTM in equal measures. That's not to say Singapore Sling don't have a unique sound of their own; vocalist Henrik Bjornsson's deadpan delivery provides an eerie narrative whatever the musical accompaniment.
(MySpace)
Video:Singapore Sling - 'Song For The Spirit' Doncaster's 93MillionMilesFromTheSun happen to be one of the loudest bands SVM has had its ears destroyed by this year. They've also single-handedly recorded, produced and self-released an awesome debut album to boot, culminating in the band recently playing as "The Telescopes" to Stephen Lawrie's long-awaited return to focusing on Taste-era material, albeit as his backing band. 93MillionMilesFromTheSun however is one of those undiscovered gems that will probably be recognised a decade or so after the band have called it a day. The heady mix guttural noise and delicate ambience cross swords instinctively on the glorious cataclysm that is 'Brighten The Sky' while the opulent psychedelia of 'Darke Star' coupled with 'Forever Soon''s incessant harmonies over a bruising wall of sound prove a fitting climax to an explosive yet delightful album.
(MySpace)

The Legends - Over And Over (Labrador) Johan Angergrad is a one-man creative machine whose best work undoubtedly materialises when he's left to his own devices. Initially a nine-piece ensemble centered around the eccentric Angergrad, The Legends became one earlier this year and the Spector-esque Over And Over was borne. Essentially a concept record, Over And Over is a vibrant masterclass in well-executed, lo-fi pop that bristles with excitement from the exuberant 'Seconds Away', which buries Angergrad's bashful vocal style amid a flood of distortion, while 'Turn Away' offers a more insightful route into its creator's world, acoustic guitars building their own wall around an almost expressionless conjecture of words. Add the Psychocandy fuzzpop of 'Recife' and the orchestral swing of 'Monday To Saturday' and you've the ingredients for one of the most alluring pop records to escape 2009's murky underground.
(MySpace)
Video:The Legends - 'Always The Same'

Of course it wouldn't be right to sign off for the year without mentioning some of the artists that have got SVM creaming their pants for 2010. When The Sun Hits (MySpace) features former members of the now defunct Model Morning alongside current Mourning Becomes Electra/Jesus Deluxe frontman Martin Orton and Spotlight Kid's Chris Davis. Although something of a supergroup in shoegaze circles, their recently recorded demo 'Stereopium' has been doing the rounds and turning heads wherever it lands. With an EP set for release next year and a batch of live dates to coincide, bigger things are predicted for the five-piece before long.

We're also fairly excited about Dorias Baracca (MySpace), the latest signings to the already mentioned Club AC30 roster. This Danish foursome may be barely out of their teens, but the sheer intensity of their pastoral sound is captured exquisitely on the forthcoming Handsome Melting Point EP, which should be out in the opening few weeks of 2010. Fellow AC30 newcomers Malory (MySpace) are anything but wet between the ears having formed a decade-and-a-half ago. However, their forthcoming (and fourth) long player Pearl Diver should engage them to a brand new audience, its wistful soundscapes recalling the halcyon days of Slowdive and Seefeel respectively.

Finally, Birmingham's Sea Fields (MySpace) are one of those bands who literally fell into our lap by chance. Thanks to the perseverence of the band members themselves, their darkly constructed noise pop (think Mew tussling with The Chameleons at dawn) found its way to our stereos and hearts in successive fashion, courtesy of such blissful pieces as stand out track 'December'. With the excellent Sound Of Confusion clubnight gathering momentum every month, Birmingham may just about have something to shout about on the music map that isn't The Twang or Ocean Colour Scene after all!