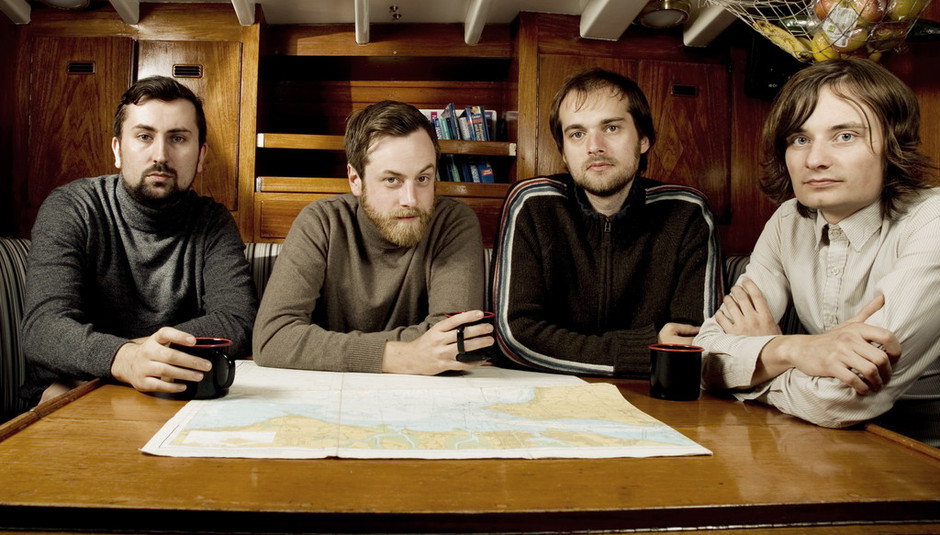 It's out with the old and in with the new as far as Leeds four-piece I Like Trains are concerned - got that - I LIKE TRAINS not iLiKETRAiNS as their moniker previously suggested. As well as a new slant on their name, they've changed their songwriting focus away from historical events of the past to a more futuristic outlook as demonstrated on recent long player He Who Saw The Deep, which scored a pretty impressive 7/10 on these very pages.

Here, songwriter in chief David Martin takes us on a track-by-track guide through the new record...

'When We Were Kings'
An unruly beast. We wrote this as the opening track for the record. We were aware that we wanted to come out with all guns blazing, to separate this album from the slow build of old. We played the track on the Sisters Of Mercy tour last year. If anything it was even more unruly then, so we took it away, refined it to a degree and it became the three guitar assault it is today.

'A Father’s Son'
This was the last track written for the album. We had gotten to the stage where we were compiling running orders for the album, and we realised that we didn’t have anything to follow 'When We Were Kings' as the second track. 'A Father's Son' is a pop song about population pressure. If only all pop songs were as quick and easy to come together as this!

'We Saw The Deep'
Probably my favourite track and also the title track of the album. It will help to read the 'Epic Of Gilgamesh' to know what I’m going on about! Themes from this track run throughout the album. One of my fondest memories of the writing of the album is from the end of this track, trying to work out who should be playing in what time signature. For the most part on the album we have tried to stay clear of the waltz time we became associated with, although this track starts there. We have become more playful with the rhythms we’re using, and this is a good example.

'Hope Is Not Enough'
Track 4 always seems like a good place to drop the pace a little. This is our Low song. When we first started writing the record, I envisaged that the whole record would be like this, barely rising above a whisper. As we went on we rediscovered the fun that can be had by making a lot of noise, but I really love how this track has turned out. It sounds like a band playing in a room, which for some reason is more difficult to achieve than it ought to be! Natural.

'Progress Is A Snake'
One of the first tracks we started to write, and one of the last ones we finished. We toured it for a while. We were running the drums through this dirty old analogue delay unit, which we left in Luxembourg and that forced our hands to approach the track from a different direction. When the other songs were finished we realised this track didn’t really fit in, and we gave it a major overhaul. In the extensive writing period we had for the album, we didn’t write a lot of songs, but most songs went through a number of incarnations before they came good. This one took ages to get the right take. Synchronised drumming is a fine art!

'These Feet Of Clay'
Another one which has changed drastically from when we first played it live. On previous albums and EPs, going into record we have had all the parts planned to the finest detail and recorded them as live. One of the things we wanted to do on this record was to leave some tracks open to interpretation in the studio. It is something that has served us well when doing b-sides. It gives some sense of spontaneity. For this track we had the outline written, and only a few vague/differing ideas of how we wanted it to be performed. I’m really pleased with the results. I think we thrived under the pressure we put ourselves under. The manipulated string outro is a fine way to play out side A.

'Sirens'
If any of our tracks are ripe for use as a hip-hop sample, it is this one! Heavy sub synth bass, and a straight and heavy 4/4 drum beat. Not entirely sure where this one came from. It was written very quickly. Everything about it says that it should be out of our comfort zone, but it felt natural right from the off.

'Sea of Regrets'
As soon as we decided to stop trying to sound like Sigur Ros we wrote this song, which is strange, because it's probably as close to them as we’ve ever been. Its 4/4 and a major key that does it. We tried everything to subvert the song, but in the end we decided it is what it is, and we let the song be. It was one of the first songs written. I was keen that the words "Some things are better left forgotten" were the first thing that people heard from the new songs, hence its single release. It marks the end of our historical obsession and the beginning of something new.

'These Broken Bones'
Another one we left unfinished until we went in to record. I had an idea that it would be sans guitar, so it goes without saying that I was vetoed and the finished track has 3 three tracks of guitar on. It took a while to bash this one into shape after the initial recording but I’m really happy with how it has turned out.

'A Divorce Before Marriage'
A close relation to 'Sea Of Regrets'. It was initially written as its b-side. I stole the chorus from a song Guy (Bannister) wrote a while ago and sketched the rest out in an afternoon. I took it to the band and they said it was too good to be a b-side, which put the pressure back on to write another one! I love the strings on this one. Lush.

'Doves'
A simple ambient full stop. Guy and I spent an afternoon playing with tape loops. We slowed a lot of things down to half speed, which is always good for a woozy full maritime feel. Lyrically I knew where I wanted the record to finish. Here.

He Who Saw The Deep is out now and available Here.