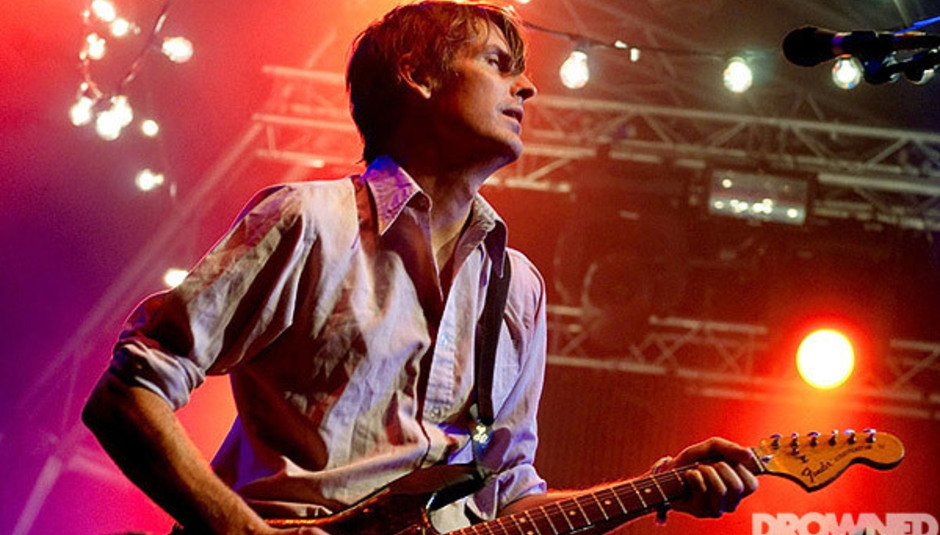 Hello friends: this year Andrzej Lukowski and James Skinner hopped on a plane (well, one went by train and the other lives there, BUT YOU GET THE IMPRESSION) and headed to the balmy city of Barcelona, where we bore witness to the tenth edition of Primavera Sound. We can't pretend we saw everything, and we can't write about everything that we did, but here are some observations. It's hard to reach a general conclusion about something so sprawling; there was kind of a dearth of hip hop this year, there wasn't especially an air of it being the celebration of a decade of goodness (as had been intimated in advance) and the sponsorship was starting to get a bit silly in places (did that small Jaegermeister van packed with annoying cheering people actually encourage anybody to buy the foul German liquor..?); but there were hundreds of great acts, the weather held, the surrounding bill at the Apolo and the park is always a treat, and y'know, point out the equivalent festival elsewhere and then we'll talk more seriously of criticisms. Photos by Lucy Johnston.

It is 6pm, the sun is blazing, the stage is massive, and for some reason Bis are playing. In fairness, they seem to be having a hoot, and it’s a spirited performance, but really, it feels incredibly perverse to have Manda Rin et al temporarily resurrected as a sort of tossed away warm up act for the rest of the festival - 2am on a smaller stage would have been a treat, this is just a bit weird. The closing ‘Eurodisco’ (I think, it has been a while) is pretty awesome, but it doesn’t really ignite an evening that doesn’t really kick into gear until The XX shove their crystalline knife into the Ray Bans stage a few hours later. (AL)

Teetering endearingly between borderline amateurism (they appear to lose Tortoise’s John McEntire at one point) and full on rock god, jam band Valhalla, Broken Social Scene rope in a massive crowd, a large quotient of special guests (Owen Pallett quietly shuffles into their ranks for a few songs, a rather ‘refreshed’ looking Spiral Stairs hollers along for a bit, McEntire does show in the end) and pretty much demolish the Ray Bans arena, charming and awing in equal measures. A few classics are jettisoned in favour of a good airing for Forgiveness Rock Record, but I could pretty much forgive them for war crimes when they break into a sky toppling ‘It’s All Gonna Break’. Sans-beard, Brendan Canning does look like a maiden aunt, mind. (AL)

It’s probably quite an unfashionable thing to say, but when it comes to Pavement I’m all about the later stuff. I mean, I can appreciate Slanted and Enchanted and Crooked Rain, Crooked Rain with the best of them, but it’s the ones I listened to upon release (Brighten the Corners and in particular, Terror Twilight) that really get me. Consequently, when ‘Shady Lane’ is finally dispatched towards the end of their set, I’m forcibly thrust back to my bedroom when the walls were literally covered with the pages of Select, Vox, Melody Maker and NME, and I was listening to Pavement, realising what a wonderful band they were. It’s a bit of a lump-in-throat moment, as for the most part of the show I have genuine difficulty getting my head around the fact that right now Pavement are playing in front of me, and from ‘Cut Your Hair’ to ‘We Dance’ to ‘Spit on a Stranger’ to ‘Range Life’ (not to mention guest appearances from Kevin Drew and members of Monotonix), they sound superb. (JS)

My theory that Tarot Sport is basically a Eurotrance record, only made in a noise stylee gains further legs when Andy Hung and Benjamin John Power draw a gargantuan horde of Spaniards, boogying as hard as their little Spanish limbs will be boogied, acting for all the world as if Fuck Buttons really were an arena dance act (as opposed to two men in hoodys battering a Fischer-Price radio). Even though the top end seems to have rather been reigned in, presumably intentionally, the sound quality is amazing, with the dronier Street Horrrsing material now garlanded with a wealth of bleeps, beeps and flickers, the whole set alive and pulsing. Sure, there is absolutely no surprise in anything played, but the sheer scale of both audience and response is something new and quite, quite intoxicating at 3am. Next time I wanna see them with lazers. (AL)

Also seen: The Fall play an adequate, remarkably short set, possibly getting banned from encoring; The XX playing an immaculately moody hour that grows in power and strength, seemingly drawing its power from the growing bank of ominous clouds and weakening sun; Superchunk are a total treat, heavy, melodic, happy and seemingly undimmed by the now quite terrifying number of years – ‘Slack Motherfucker’ totally roolz, Tim from Les Savy Fav guests for a song and appears to be (rightfully) in enough awe to tone down his wacky tramp act; The Books, mercifully delayed until after dark, freaking us out something marvellous with their relaxing/terrifying collages of sound and slides.